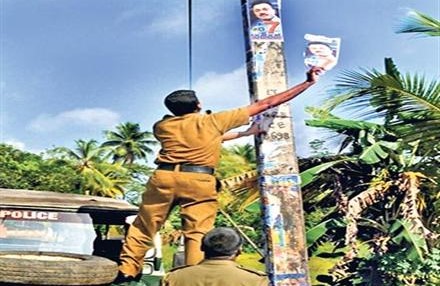 Sri Lanka government has banned putting up posters and banners without prior permission in its capital city, Colombo. The ban is expected to extend to other cities as well.

State controlled Daily News reports that Megapoilis and Western Province Development Minister Champika Ranawaka  has ordered municipal commissioners, public health heads and the police to file charges against individuals and companies that put up posters and banners in the city. The aim of the ban is said to be ‘to transform Colombo and suburbs into clean environs’.

Minister Ranawaka said legal action will be taken against those putting up posters illegally in public places or public property in keeping with the ongoing waste management drive.

“We will also institute legal action against the owners of those posters and banners for the obvious reasons of ensuring safety and cleanliness of the city,” he said.

Political posters has been part of the city life and all most all political groups put up posters on city walls.

Police Environmental Units, Head of environmental institutions, Municipal Commissioners and Secretaries have been called by the minister not to tolerate defiance and carelessness on the part of individuals who have chosen to ignore poster, flyer and banner rules during a waste management review meeting held at the Colombo Municipal Council reports Daily News.

Government has given two-week period  make awareness on the new regulations.

“Next, we will prosecute them for illegally pasting posters and banners within and near the city,” Minister has  said.