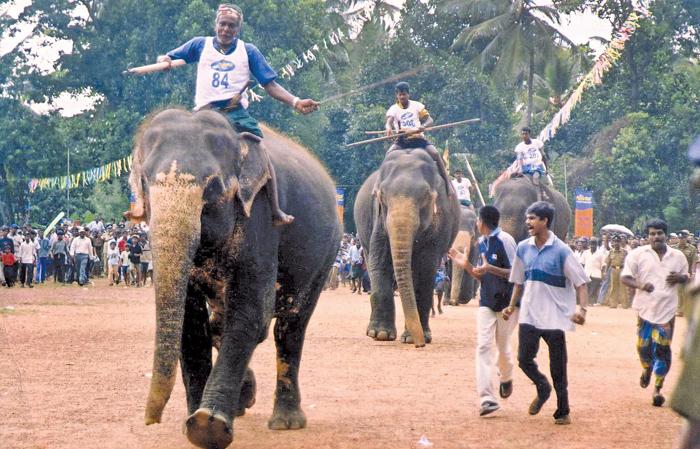 By Vimukthi Fernando and Husna Inayathullah.

During New-Year celebrations, regular as well as high profile, onlookers cheered and jeered while elephants, legs chained were prodded and pushed to race each other. One such event was held in Homagama organized by the Samagi Sports Club and the other in Suduwella, Maradana organized by Colombo Municipal Councillor (UNP), Kithsiri Rajapakse. Two other New-Year festivals, in Galle and Sigiriya, purportedly organized by the Cultural Affairs Department featured the New Year game ‘kamba-adeema’ or tug-o’war events, using elephants to compete against human participants.

These new and barbaric Avurudu ‘games’ have environmentalists and animal activists railing. Games like racing, experts said, do not come naturally to elephants. Every elephant is pitched against the other only by inflicting pain to enrage the animal. It was beyond shameful, said every activist the Sunday Observer contacted this week, that a country which practices Buddhism and ‘ahimsa’ engages in such brutality against these profoundly sentient creatures. Elephants are so intricately woven into Sri Lanka’s ethos and culture, it is unthinkable that these animals would be subject to torture for no reason but the entertainment of human beings.

“They run because the mahouts prod them on specific pressure points, inducing pain. When the animal cannot bear the pain, it starts running to get away from it,” explained Sujeewa Chandana, environmental activist and a member of the Young Zoologist Association (YZA). In the wild, elephants resort to running only when they charge, Chandana explained. “Usually, they are slow animals, their massive bodies inhibiting their movement.”

According to Chandana, racing animals with chains on all four legs is not only painful for the animal but the process itself is harmful. “Racing also has the danger of these animals falling over, never to stand up again. They could be paralyzed. Neither the owners nor the organizers realize the risks involved.”

Elephant races are a recent addition to New Year festivities in Sri Lanka, gaining prominence in the past 10 years. 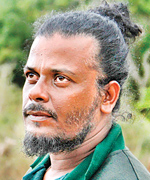 The inclusion of elephants for entertainment is aimed at base pleasure and monetary gain to attract tourists as well as locals who are charmed by the sight of elephants.

The risk of these activities is not for elephants alone, warns YZA member Chandana. Being unpredictable creatures, an elephant running amok can endanger people, simply because of its size.

Even in annual cultural pageants, such as, the Esala Perahera in Kandy where over 60 elephants participate, one of the biggest concerns is mahouts losing control of the animals. In the past, people have been killed by stampeding elephants at such pageants, despite those pageant elephants being familiar in the environment. While it is no justification for using elephants even as pageant participants, at least in Kandy, veterinary surgeons equipped with tranquilizer guns are positioned throughout the perahera route to arrest such a situation.

Actress and environmental activist Iranganie Serasinghe called the practice ‘morally and ethically wrong’. “It is cruel to let animals suffer for the pleasure of humans,” Serasinghe emphasized.

“Human beings have invented enough games for themselves without having to torture animals. Why not stick to them?” said Colombo’s new Mayor Rosy Senenanayake. Mayor Senanayake, Prime Minister Ranil Wickremesinghe and other politicians graced the Maradana New Year festival organized by CMC Councillor Rajapakse as chief guests, but it is not clear if they were present during the ‘racing’ or endorsed the ‘game’.

Believed to be extremely intelligent with long memories, the Asian elephant is a social animal living in herds. Elephant herds act differently and more responsibly than other herd animals when faced with danger to a member, weak or young animals and new births. It had been found that in the wild they form deep family bonds, show a variety of emotions and walk long distances to forage and interact strongly with other elephants.

This gentle pachyderm, the largest land mammal is a keystone species in Sri Lanka, a world renowned biodiversity hot-spot.

As an island nation Sri Lankan elephants are a unique sub-species of the Asian elephant, shaping the country’s ecological character. As recorded in ancient literature, the country’s unique association with this gentle giant dates back to over 5,000 years. 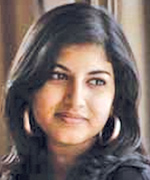 Shanuki de Alwis, who calls herself an ordinary citizen with a passion for animals, says, elephant racing is neither cultural nor traditional.“In Sri Lanka we are blessed with this ancient wisdom, knowledge and living in harmony with nature. When the rest of the world is retreating from the practice of captivity, we act like a pack of ignorant fools,” she lamented.

Veteran environmental Lawyer Jagath Gunewardane told the Sunday Observer that elephant racing was illegal and violates the country’s laws. Gunewardane said, Section 22 A of the Fauna and Flora Protection Ordinance (FFPO) stipulates the licensing conditions of captive elephants. License is issued under the condition that they be used for a specific purpose. The cultural and religious purpose is the use of elephants in cultural pageants. “Captive elephants cannot be used for commercial purposes. Since no permit has been given to any person to use an elephant for a race, it is a violation of conditions.

The Department of Wildlife Conservation (DWC) has the right to investigate and cancel the licence,” he clarifies.

But DWC Director General Chandana Sooriyabandara claims, he does not have the man-power to take action. “To be effective, we need to employ the staff in places where their service is crucial,” he explained.

Lawyer Gunewardane disagrees. He said, the DWC’s rightful action should be to bring law-breakers to task by taking legal action against them and cancelling their permits. “There is adequate provision in Sri Lanka’s legislation to convict violators.

While the FFPO stipulates conditions on which any captive elephant could be kept, the Prevention of Cruelty to Animals Ordinance lays down conditions on the treatment of any such captive animal,” he explained. .

Whether an Avurudu festival or any other cultural event, the use of elephants cannot be condoned, opined Conservationist and President of the Wildlife and Nature Protection Society (WNPS), Rukshan Jayawardene. “With serious ethical and moral questions being raised about the keeping, training and use of elephants in the country, elephant owners are finding new ways to make money from their wards,” Jayawardane claimed.

All so-called domestic elephants are state ‘property’ and many are wild born and as such, the WNPS would like to see regulations being brought in by the government to protect elephants from cruelty and commercial exploitation, he added.

Nor is an elephant a true domesticated animal, rather they are essentially wild animals held in captivity since early historic times. This holds true even when elephants are born in captivity. 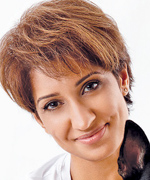 Animal Welfare Activist and founder of ODEL department store Otara Gunewardane told the Sunday Observer, the use of elephants for racing in Avurudu festivals was a huge step backwards for Sri Lanka.

“When the government has taken one good step forward with the budget to correct some of the wrongs we have done in the past for our elephants and other animals, it is a huge step backwards to permit races like this,” she asserted.

“These events are utterly humiliating, cruel, painful and stressful for our majestic elephants,” Gunewardane added, enraged by the events that unfolded last week.

The country’s budget proposals for 2018 allocated Rs. 75 million to convert the national zoos into open-zoos to provide near-natural habitats, where animals could roam freely. Revamping the Pinnawala Elephant Orphanage, including training for mahouts, and supporting conservation efforts of endangered endemic animals were other ‘animal friendly’ proposals that were included in the budget. 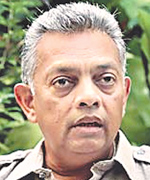 Leading conservationist and acclaimed former Director General of the Department of Wildlife Conservation, Dr Sumith Pilapitiya told the Sunday Observer that elephant racing should never have happened in the country. “Even from a tourism point of view, any country should have ethics and norms, and elephant-racing is an unacceptable act,” Dr Pilapitiya asserted.

The trend all over the world now, he said, was to see animals in their natural habitats. “We should be prouder to show elephants in the wild.” Further, taking an elephant captive, even as a young calf from its natural habitat has an “adverse impact on social structure and wellbeing on the elephants,” says Pilapitiya.