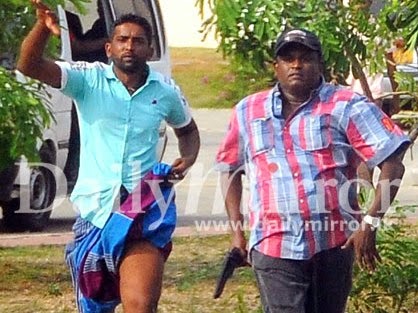 This only lends credence to allegations at last month’s UN Human Rights Council sessions that violation of human rights is a regular feature in Sri Lanka. Not only her citizens, but even the rights of lawfully elected Parliamentarians are in danger of being extinct.
It is the right, duty and responsibility of every citizen in the country to condemn this act and seek justice via the highest legislative body of the country, Parliament, Mr. Jayasuriya concludes his statement.
‘Where is law and order in this country?’, Karu asks
Mark the day. Thursday, April 17, 2014 would go down in Sri Lankan history as a ‘black day’. Elected Representatives of the people, a team of UNP Parliamentarians five in number, comprising Ajith Perera, Eran Wickramaratne, R Yogarajan, Nalin Bandara and Ajith Manapperuma visited the Mattala Rajapaksa International Airport and Hambantota Harbor projects, the twin-white elephants of this Government, says acting leader of the UNP Karu Jayasuriya in a statement.
The statement says, they were greeted with catcalls, stones and guns by the devotees and supporters of the Rajapaksa clan in their own den. The electorate is that of the Speaker of the House of Parliament. The district is the playground of the President of the country and the visit was a basic expression of a fundamental right of each and every citizen of this country- freedom of movement. While the President, just twenty hours before this horrendous incident, was taking part in a traditional New Year Oil-anointment celebration, his goons went to work, brandishing weapons of violence and exposing to the hilt, the President’s hypocritical adherence to tradition and rituals. The Rajapaksas have made a mockery of democracy, of civility and of decency.
The team of Parliamentarians was manhandled by the thugs of the regime, intimidated by gun –tootting Hambantota Mayor Eraj Ravindra Fernando and harassed beyond shame by those who have been brainwashed evidently on the strict instructions of the godfathers of the Deep South- Rajapaksas. Mayor Eraj Fernando carrying a loaded pistol was visible for everyone and has been seen on camera, thanks to the alertness of the media cameramen.

This is not the country we should leave behind for our children to inherit. Political power does not give this Government or any other person, civil or uniformed, any privilege to curb the fundamental rights enshrined in our Constitution. The sheer impotence of the Police Department was in vivid display. Uniformed men were reduced to being mere spectators. Good governance, transparency, accountability and basic decency were all thrown out the window.

This gross violation of societal discipline was once evidenced long years ago in a different era. Now it’s revisiting us in a much more gruesome manner and the ominous signals that these latest incidents emanate would be extremely harmful to a growing young generation, says the UNP acting leader.
It is with a deep sense of sorrow and nostalgia that we remember how the Opposition Parliamentarians were-escorted with serene dignity and decorum to the then emerging Mahaweli dams and reservoirs. Apparently the Rajapaksas and their cohorts don’t seem to understand the meaning of dignity and ethical behavior.
This gross violation of basic human rights of our citizens must be condemned without equivocation. It is a slap on the face of every man, woman and child living in this land. It is with a great sense of responsibility and grave duty that I ask the Honorable Speaker of the House of Parliament, who hails from the district in which this incident took place, to appoint a panel of investigators who are of eminence and acceptability to go into this callous and violent behavior of thugs and hooligans and submit the findings to Parliament. The victims were members of Parliament and the attackers were directly identified as government-sponsored ruffians.
The dishonorable behavior of the Police officers, who were present while this gross violation of human rights took place and yet were observing non-interference, is a clear indication as to what power and armor could do to shield these wrong-doers. We also condemn vehemently the remarks made by Ajith Rohana, the Police Spokesperson who has stated that if the MPs took their security details, the incidents could have been averted. The Police spokesperson has become a Government propagandist and is not only a disgrace to the Police uniform but also to the government that is merely paying lip service to democracy. The Police spokesperson is uttering outright lies and he should be made accountable for that grave misdemeanor too.
This only lends credence to allegations at last month’s UN Human Rights Council sessions that violation of human rights is a regular feature in Sri Lanka. Not only her citizens, but even the rights of lawfully elected Parliamentarians are in danger of being extinct.
It is the right, duty and responsibility of every citizen in the country to condemn this act and seek justice via the highest legislative body of the country, Parliament, Mr. Jayasuriya concludes his statement.