Sri Lanka at the crossroads: Discrimination and thuggary against Muslim community 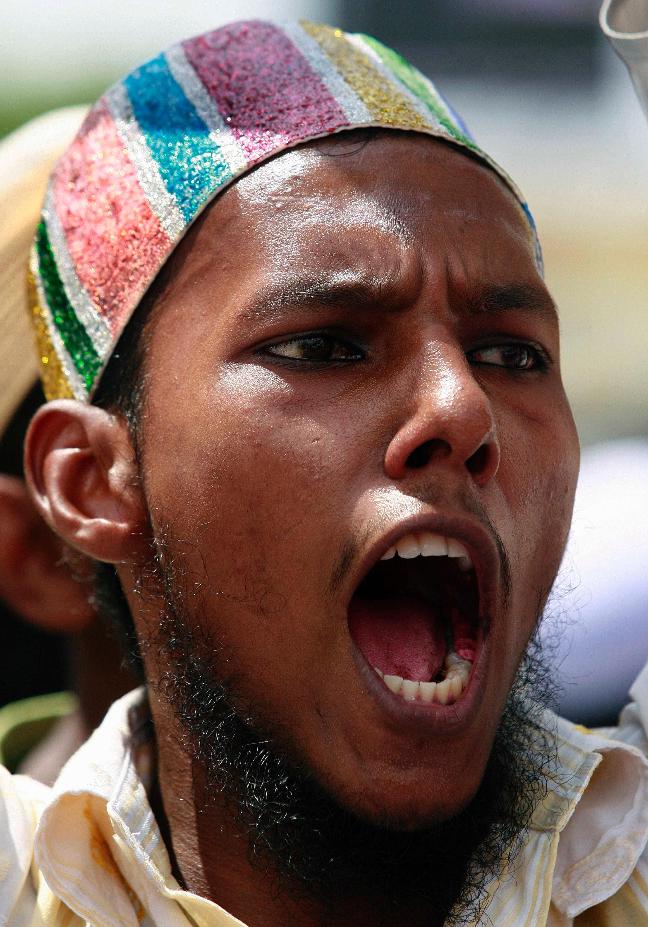 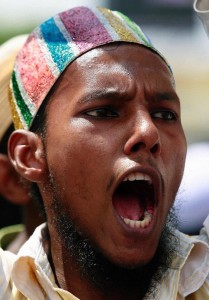 A Sri Lankan Muslim shouts slogans during a protest against the government in Colombo April 27, 2012. According to local media, Muslims in Sri Lanka have gathered to protest against a government decision to demolish and relocate a mosque located inside a Buddhist sacred area in the central town of Dambulla. The decision came after pressure from Buddhist monks who have demanded the removal of the mosque and Hindu temple from the Buddhist sacred area. Thousands of Buddhist monks and lay supporters charged into the mosque claiming the mosque was built illegally on April 20. Sri Lanka’s Minister of Lands and Land Development Janaka Bandara Tennakoon said on Wednesday that the mosque cannot be removed and that the conflict should be resolved through peaceful discussion.
– AlertNet
REUTERS/Dinuka Liyanawatte Credit: Reuters

By Tariq A. Al Maeena, Special to Gulf News
The world cannot continue to tolerate the oppression and terror activities directed at minorities and Sri Lanka is no exception.
When Sri Lanka overcame the rebellious movement of the Tamil Tigers back in 2009, there was hope that the island nation would finally emerge stronger and more united.
The scars of the three-decade struggle by the Tamils had hurt the image of the country both politically and economically, as charges of unrestrained brutality and ethnic cleansing were levelled at the ruling party at the time.
The Tamil movement had led more than 150,000 Tamil Lankans to flee their country and seek refuge in other countries. Thousands of others — estimated between 80,000 to a 100,000 — lost their lives in the prolonged struggle, with some 40,000 casualties alone in the last days before the civil war was finally declared over.

With such deep wounds scarring the country, there were initial efforts by the government to forge reconciliation between the majority Buddhist Sinhalese and the minority Tamil Hindus and the Muslim population of the island.

Events lately suggest that all is not well in that country. There are signs that chasms are appearing, often in the form of violence against minorities. The island’s Muslim community is being targeted by race-inciting Sinhalese Buddhists, while the government appears to be condoning such attacks with their inaction.

In that the victims happen to be the minority sects in Sri Lanka, the political price of winning favour among the Sinhalese Buddhist majority far outweighs the peace and tranquillity that has once again deserted the island’s minority communities.

The Buddhist Power Force, better known as Bodu Bala Sena, is accused of being the leading terror group, inciting and organising violence against Muslims in all corners of the country.

Allied with the JHU party in the ruling coalition, this terror group is now claiming that the island’s Muslims are a threat to Buddhism and their way of life. They also assert that they will “strengthen and defend the Buddhist religion and its heritage,” using all options.

Their obvious aim is, in fear of an uprising, to ensure the continued suppression of the Muslim minority. However, they should not be in fear as in truth the two million Muslim minorities in Sri Lanka, who make up 10 per cent of the population, have been sidelined for decades.

Muslim Sri Lankans are rarely recruited in the armed forces, police or offered equal opportunities and perks in government departments and other state institutions. In the commercial and trade sectors, Muslims have also been marginalised by their exclusion from government contracts, tenders and all such lucrative economic activities.

There is also the obvious indifference displayed by the government towards the 130,000 Muslim refugees from the north who were caught in the crossfire of the civil war and today continue to languish in refugee camps in appalling conditions three and-a-half-years after the end of the conflict. No substantial government effort is being taken to address their plight.

Meanwhile, the Bodu Bala Sena began a series of provocations recently against Muslims in the central province at Buwelikada, a small town about 15km from Kandy. The town’s predominantly Muslim population is mostly small shop owners and vendors.

According to eyewitness accounts, “a group of Sinhalese youth travelling in a bus began a quarrel with Muslims, claiming that a van had obstructed the road. Several Muslims injured in the clash were hospitalised. The government immediately deployed units of the notorious police special task force (STF), whose members did not arrest the culprits, but instead were sympathetic towards the thugs”.

Muslims charge that such acts of vandalism and terror are orchestrated to poison the minds of mainstream Sinhalese against Muslims “by a small but well organised group demonising Islam and Muslims through 19 Sinhalese and English language websites”.

They point to the recent destruction of a 400-year-old Muslim shrine in Anuradhapura, followed by the disgraceful attack on Dambulla Mosque by a mob of Buddhist vandals led by the chief Buddhist priest of the area.

Ironically, the inaction on the part of the government led to this incident being recorded as the first time in the history of the country that a frenzied mob prevented Muslims from performing their obligatory Friday prayers and since then there have been attacks on a number of small mosques all over the country. However, a blind eye has been turned towards these atrocities by the authorities and the perpetrators have not been brought to justice.

The island country is at a crossroads today. If it continues to yield to the few terror-crazed Sinhalese Buddhists, who want to rid their country of all minorities and turn the countryside into killing fields, then it may well open up fresh wounds and begin another long journey into internal conflict and unrest.

The world cannot continue to tolerate the oppression and terror activities directed at minorities and Sri Lanka is no exception. It cannot distort facts to disguise ethnic hatred and violence. The island state will not escape reprisal for its failure to preserve the rights of its minority citizens.

Tariq A. Al Maeena is a Saudi socio-political commentator. He lives in Jeddah, Saudi Arabia.
http://gulfnews.com/opinions/columnists/sri-lanka-at-the-crossroads-1.1131223