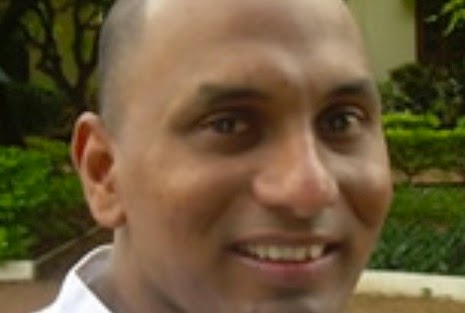 Sri Lanka: Free Prominent Rights Defenders [1]
The arbitrary arrest and detention of prominent human rights defenders is an attempt to silence criticism and divert the spotlight from ongoing abuses, leading global and Asian human rights monitors said today in a joint statement.  The statement was issued by Amnesty International, Forum Asia, Human Rights Watch, the International Crisis Group, and the International Commission of Jurists.
Ruki Fernando of the Colombo-based INFORM and Father Praveen Mahesan, a Catholic priest, were arrested in Kilinochchi on March 16, and are believed to be detained without formal charges under Sri Lanka’s notoriously draconian Prevention of Terrorism Act (PTA).
“The Sri Lankan authorities need to release Fernando and Father Praveen, and end the ongoing state harassment of human rights defenders,” said David Griffiths, Amnesty International’s deputy director for Asia Pacific. “How can the international community take Sri Lanka’s claims to respect rights seriously when rights defenders continue to face intimidation and criminal charges for demanding accountability and human rights protection?”
The police Terrorism Investigation Division (TID) detained and questioned Ruki Fernando and Father Praveen after they sought to ensure the welfare of 13-year-old Balendran Vithushaini, who had been ordered into probationary care following the arrest of her mother, Balendran Jeyakumari, on March 13. Both mother and daughter are active opponents of enforced disappearances in Sri Lanka and have been prominently featured in international media coverage of demonstrations by families of the disappeared, most recently in Jaffna in November 2013 during a visit by British Prime Minister David Cameron.
Fernando and Father Praveen were questioned separately in two different buildings for more than three hours by several TID officers. Lawyers acting on their behalf were given contradictory information about the arrests and the reasons for their detention. The most recent information is that Fernando and Father Praveen have been taken to police Terrorism Investigation Division headquarters in Colombo, and their lawyers are still seeking access to them.
Fernando and Father Praveen have not been charged to date, but according to Sri Lankan Police spokesperson Senior Superintendent Ajith Rohana, they will be charged with “attempting to create instability among communities” and “allegedly promoting separatism” under the Prevention of Terrorism Act.
The PTA has been widely criticized by Sri Lankan civil society, international monitoring organizations, and United Nations bodies. In its report, Authority without Accountability: The Crisis of Impunity in Sri Lanka [2], the International Commission of Jurists documents [3] how provisions of the PTA have resulted in arbitrary detention, contravened suspects’ right to a fair trial and due process, and facilitated torture and other ill-treatment and enforced disappearances.
The human rights groups said that the arrests are particularly disturbing since a resolution on Sri Lanka’s failure to address accountability is under discussion and will be voted on soon at the ongoing Human Rights Council (UNHRC) sessions in Geneva. The international community has long called for Sri Lanka to take meaningful steps to end its culture of impunity.
“This ongoing campaign of reprisals against those speaking out against human rights violations shows the extent of the government’s impunity,” said Sam Zarifi, Asia director at the International Commission of Jurists. “The international community, through its voting at the Human Rights Council, must judge Sri Lanka not by its promises, but by its actions.”
In spite of two prior resolutions by the UNHRC in 2012 and 2013, Sri Lanka has taken no measurable steps towards ensuring justice for the victims of its civil war, and has instead launched an aggressive campaign against those who advocate for accountability. Human rights defenders, activists, journalists, and civil society members who are critical of the government have regularly been threatened and harassed. Those who have an international profile, such as Fernando, face particular government hostility.
“Sri Lankan authorities systematically clamp down on those who seek to reach out to the international community, especially around significant events such as the Human Rights Council sessions or the Commonwealth Heads of Government Meeting,” said Evelyn Balais-Serrano, the executive director of Forum-Asia. “Instead of protecting human rights defenders, the latest arrests show the Sri Lankan government is stepping up its aggressive stance towards those seeking justice and answers.”
The arrests also call into question the Sri Lankan government’s stated commitment to improving respect for human rights since the end of the armed conflict with the Liberation Tigers of Tamil Eelam in 2009, the groups said.
“Arresting peaceful activists known for their work with victims of rights violations from all ethnic communities is not a way to build trust and restore relationships damaged by the war,” said Jonathan Prentice, the International Crisis Group’s chief policy officer. “If sustainable peace is to be more than an illusion, the rights of Sri Lanka’s victims and human rights defenders to speak freely and safely must be protected.”
The organizations stressed that Fernando and Father Praveen should be given full rights while they remain in detention. Under international law, including the International Covenant on Civil and Political Rights, to which Sri Lanka is a state party, people deprived of their liberty must be promptly informed of the reasons for their detention, be given prompt and regular access to lawyers, and be promptly brought before a judge or judicial officer.
The rights organizations pointed out that Sri Lanka’s security forces have a well-documented history of custodial torture. Human Rights Watch’s 2013 report, “‘We Will Teach You a Lesson’: Sexual Violence against Tamils by Sri Lankan Security Forces [4],” documented sexual violence and other torture by the TID and other security forces.
“Human Rights Council members should demand the immediate release of Fernando and Father Praveen and be clear that this will not deter them from adopting a necessary resolution on Sri Lanka,” said Brad Adams, Asia director at Human Rights Watch. “The arrest of these human rights defenders shows just how important it is for the international community to stand up for human rights in Sri Lanka.”