Sri Lanka: Arrest of novelist Shasthika under ICCPR is abuse an abuse of the act. 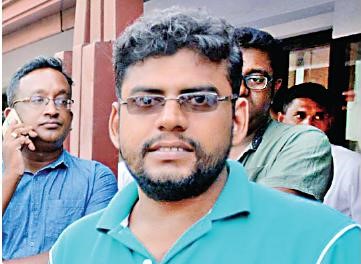 When post-modernist, award winning novelist Shakthika Sathkumara walked into the Polgahawela Police Station on 1st April morning along with his lawyer and two other associates, what followed was completely unforeseen.

About four Buddhist monks were at the station already. Sathkumara, a 33-year-old father of two, was hoping to avoid a confrontation with the monks. When he was first called to provide a police statement he refused and requested a day that did not overlap with the time the monks will also be present. But the police turned a deaf ear to his request.

Sathkumara knew all too well why the monks were there. One of his short stories, published on Facebook about two months ago was subjected to extreme criticism. Its message, (irrespective of whether it be true or false) did not sit well with the monks.

His fiction ‘Ardha’ that translates from Sanskrit to ‘half’ revolves around a de-robed monk. Towards the end of the story Sathkumara indicates that the former monk was sexually harassed by the chief priest of the temple to which he was attached. The incident results in the “abbithaya’s” de-ordainment. However, his layman’s life turns out to be no different. He befriends a man whose inclination seems not dissimilar to the chief monk’s.

Homosexuality and sexual harassment within Buddhist temples, (taboo subject areas in our country), are the key subjects that caused the uproar. After reading the story, a group of Buddhist monks first complained to the Nikawaratiya Divisional Secretariat where Sathkumara worked as a development officer. Though an internal inquiry was launched no action was taken. Later the monks had protested and handed a petition to the District Secretary. Another inquiry was launched but no action, as demanded by the monks, was taken. The monks then went to the police.

Convener of the FMM Free Media Movement (FMM) C. Dodawatta said creators have to explore their content sensibly to not harm or insult a religion or culture. He said however involving the police to act against a work of a creator sends a bad message to all of society.

On April 01 when Sathkumara was at the station he knew why he was there and that he would be charged under the 292 of the Penal Code which states, “Whoever, with the intention of wounding the feelings of any person, or of insulting the religion of any person, or with the knowledge that the feelings of any person are likely to be wounded, or that the religion of any person is likely to be insulted thereby, commits any trespass in any place of worship or on any place of sepulture or any place set apart for the performance of funeral rites, or as a depository for the remains of the dead, or offers any indignity to any human corpse, or causes disturbance to any persons assembled for the performance of funeral ceremonies, shall be punished with imprisonment of either description for a term which may extend to one year, or with fine, or with both.” A bailable offence.

The relevant section has been quoted at length, a careful reading of which indicates to any layman (let alone any Lawyer), that Sathkumara’s criticism bears no relevance to and does not seem to fall within the ambit of the said section 292, which, as can be seen, is designed to protect “trespass” or “disturbance of …”an assembly”.

However, in a devious turn of events for Sathkumara and his lawyer, the Police charged him under the International Covenant on Civil and Political Rights (ICCPR) Act of 2007. It’s Section 3 (1) which states “No person shall propagate war or advocate national, racial or religious hatred that constitutes incitement to discrimination, hostility or violence”. This left Sathkumara no avenue to apply for bail as only a high court judge could permit bail.

To many people, this seems like a paradigm shift from the original purpose of the ICCPR. Shedding light on the matter Attorney-At-Law and human rights activist Gehan Gunatilleke said, “ICCPR Act is designed (among other things) to deal with cases of incitement to violence. Many rights advocates have pressed for the implementation of the Act to punish those who have incited violence against religious groups.”

However, he continues, no conviction has thus far been secured against any such perpetrator. “By contrast, it seems to have been (now) invoked against a writer who has supposedly offended the Buddhist clergy. Causing offence to a religious group must be contrasted with inciting violence against that group.”

Gunatilleke said invoking the ICCPR Act to punish those who cause mere “offence to the clergy” is clearly an abuse of the Act. He added that the added feature- that bail cannot be granted except by the High Court under the ICCPR Act- makes this potential abuse even more serious, as Sathkumara cannot apply to a magistrate for bail, and must wait to be produced before a high court judge to apply for bail.

Sathkumara was remanded till April 9 by the Polgahawela Magistrates Court.

Speaking to the Sunday Observe his lawyer P. W. W. Ratnayake said Sathkumara’s intention was not to incite violence but to explore a storyline using his creativity. “He has written over 30 books. Among them are three Buddhist books,” the lawyer said. Sathkumara has also won several awards for his work.

Gamini Viyangoda, co-convenor of the civil society movement Purawesi Balaya, reveals another factor about Sathkumara’s work. He said, through ‘Ardha’, the young author hoped to protect Buddhism and not destroy it.

“He is telling monks ‘look, you are supposed to be celibate’, and also reveal sexual abuse in temples,” he said. According to Viyangoda the young writer expected to remove undesirable elements from the Buddhist priesthood by exposing them. Writer’s rights of free expression are constrained by taking such strong legal action against them, he said. “This is a bad omen for the country,” he warned.

This is not the first time Sri Lanka’s “religious policing” of artistic work has taken an ugly turn. Last year, several creations were ‘deemed ‘offensive’, towards “religion and culture”. Among them were the radio dramas by Malaka Dewapriya.

General Secretary of the Jathika Hela Urumaya, Omalpe Sobitha Thera condemned the dramas, sponsored by the Office of National Unity and Reconciliation, and branded them as anti-Buddhist. Dewapriya stressed that the material in the dramas were not religious at all. The titles ‘Tharuwan Saranai’ and ‘Nihon Sapa Labewa’ that ignited criticism were later changed.

Budunge Rasthiyaduwa penned by K.K Srinath saw a much harsher fate in the same year. An investigation was launched by the Inspector General of Police to probe the novel’s ‘anti-Buddhist’ material. It was reported that bookstores were threatened and demands made to remove the novel from their shelves, and those involved in publishing were threatened on Social Media.

Much earlier in 1992 Stanley Jeyaraja Thambiah’s “Buddhism betrayed?’ was banned in Sri Lanka upon publication. The uproar was focused on the cover of the book which depicted Maduluwawe Sobhitha Thera gesturing with a clenched fist. And even earlier, 1975, beloved author Martin Wickramasinghe’s final publication “Bhava Tharanaya” triggered and offended fragile sensitivity of certain ‘Buddhist’ who claimed the novel, that observed the life of Prince Siddhartha in cultural and pragmatic terms, “insulted the religion”. The author died a year later.

Former President of the Federation of University Teachers’ Association, Dr. Nirmal Ranjith Dewasiri who wrote a paper titled ‘New Buddhist Extremism and the Challenges to Ethno-Religious Coexistence in Sri Lanka’ (available online) said religious extremism goes against such manifestations. He Sri Lanka was always sensitive towards literacy work when it explored Buddhism in any other way than the conventional..

“During the last 30 years we see a gradual increase of intolerance of such work. Anyone who says anything against the established religious beliefs, is attacked – thus Freedom of Expression is challenged,” he said.

He says this is fuelled by State mechanisms, including the Judiciary, which is flexible towards extremistvoices than shun artistic work.

Dr. Dewasiri added that the motive of most of the religious groups which create a hullabaloo, is not necessarily to ‘protect’ Buddhism but to seek popularity as “Buddhism saving” vigilantes.