Sri Lanka: Arrest of HRD Jayakumari may strenthen the call for International Investigation 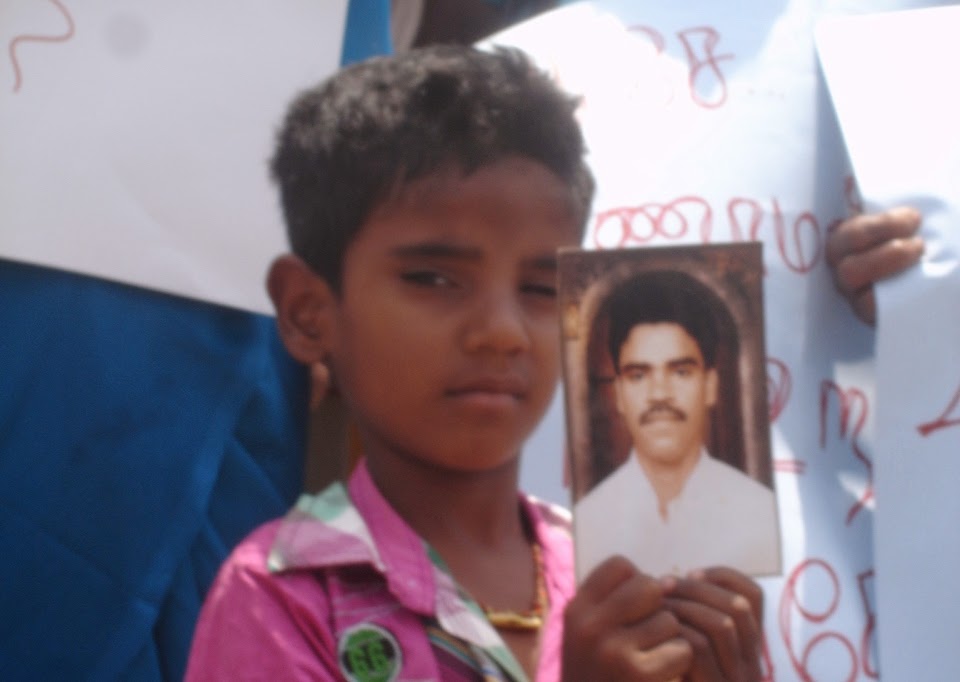 THE TRAGEDY OF VULNERABLE FAMILIES OF DISAPPEARED PERSONS – NPC release
The arrest and detention of Balendran Jayakumari under controversial circumstances raises the question whether those who persevere to openly advocate on behalf of the victims of the war are being targeted for punitive action.  The government’s police spokesperson stated that a shooting incident took place in the north and they have identified a house where the suspect has been hiding and that two women are being investigated.    Human rights defenders in the area report lots of checkpoints, raids, questioning, fear and surveillance.
Jayakumari is reported to have been detained under the Prevention of Terrorism Act for 16 days by a court order and  sent to the Boosa detention centre which is at the other southern corner of the country.

During the past five years since the end of the war in 2009, Jayakumari has been one of those in the forefront of families seeking the whereabouts of their missing loved ones.  She is a victim herself who lost three of her four children in the war.  Two of them were killed in the course of the war.  The third, a boy aged 15 at the time he went missing, is alleged by her to have been taken into government custody. Her remaining child, a girl aged 13, has been pictured carrying the photograph of her missing brother, and crying and asking for her brother’s return.
It is reported that due to detention of her mother, Jayakumari’s daughter has been taken into the care of the government’s probation service, as other families are afraid to take her in.  It is this type of ongoing human rights tragedy that moves many people to support the call for a credible and independent investigation into what happened in the last phase of the war, and what continues to happen today. This is despite the spotlight being directed on the actions of the Sri Lankan government in Geneva right now.
The new and revised US draft resolution on Sri Lanka which is reportedly being circulated among members of the UN Human Rights Council expresses deep concern over reported intimidation and retaliation against civil society members who engage with UN human rights mechanisms including those who met with the High Commissioner during her visit.  As the arrest of Jayakumari can conceivably be seen as an attempt to cause fear and the silencing of those who are seeking knowledge of their loved ones, the government needs to make clear what its position on this matter is.  It also highlights the need for the repeal of the Prevention of Terrorism Act and better protective mechanisms for citizens who campaign for human rights and justice.
We note that the army spokesperson has been reported as saying “Jayakumari was taken into custody for harboring an armed criminal wanted in connection with an ongoing investigation.  Her young daughter was also taken into protective custody as there was no adult in the neighbourhood willing to give shelter to her.”
In view of the disputed and controversial nature of the facts, we believe the National Human Rights Commission should look into this case and all other cases where persons are detained under the Prevention of Terrorism Act as a matter of course until such time as the Act itself is repealed.  The National Human Rights Commission should meet international standards and be capable of reporting independently to the UN Human Rights Council.  We also believe that in the present circumstances, only such a mechanism can stall the international thrust of an international investigation into Sri Lanka’s human rights record.
Share
Facebook
Twitter
WhatsApp
Pinterest
Email