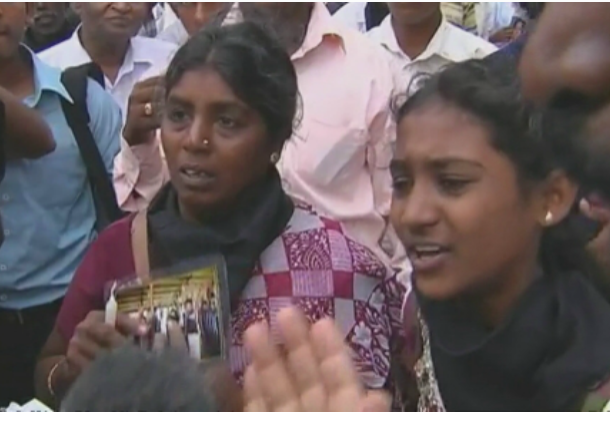 Callum Macrae
Last November, when Jon Snow accompanied Prime Minister David Cameron to the former war zones in the north of Sri Lanka, he was mobbed by crowds of desperate mothers pleading for his help – for any help – in the desperate search for their missing loved ones, writes Callum Macrae.
Among them was a woman called Balenderan Jayakumari. Then, just four weeks ago, Mrs Jayakumari warned that she was being followed and harassed as a result of her campaign to find out what happened to her last remaining son – one of Sri Lanka’s thousands of disappeared. Yesterday she was arrested along with her 13-year-old daughter and charged under Sri Lanka’s terrorism laws.

6,000 missing
In 2009, at the end of the war, Jayakumari was told that, like many thousands of other LTTE fighters, her son had surrendered. That was the last she and her daughter heard of him. The government denied all knowledge of him. He became just one of the thousands of missing. Sri Lanka has over 6,000 listed as missing – and many others who are not listed. Only Iraq has a larger number of disappeared.

Jayakumari and her daughter approached the authorities – and they denied all knowledge of him. They did not hold him, they insisted.

Stories of intimidation abound – and those who testify do so in the knowledge that there is no witness protection scheme.

But then a photograph appeared in a government report. The caption said it showed former LTTE fighters in a government rehabilitation centre. Among the prisoners was Jayakumari’s son. Since then, in a country where to speak out is very dangerous, Jayakumari and her daughter have taken every opportunity to shout cry and plead to have Mahindan.

When David Cameron visited Jaffna during the Commonwealth heads of government summit, they were there – though police prevented them getting anywhere near. But as the prime minister left, they managed to break away, along with dozens of desperate weeping relatives, and made their desperate plea directly to the remaining journalists before they too were bundled away.

The government of Sri Lanka claim they are investigating the thousands of disappeared. They say they have a commission of inquiry which will get to the truth of what happened. But stories of intimidation abound – and those who testify do so in the knowledge that there is no witness protection scheme for those who speak out.

Now Jayakumari has been subjected to a detention order under the prevention of terrorism act. She could be held indefinitely under Sri Lanka’s draconian legal regime. Her daughter is in protective custody.

Last month she sent me a video appeal.

This is what she said: “Unknown faces follow me and track me whenever I return home after protest rallies. This is a serious threat and at time I am scared to live here. I go for all these protests, shouting from the streets for my son’s release. Lot of people are taking photographs of us, I do not know all of them.

“I have been followed on several occasions. I am living in this village with my daughter. So, sometimes we are terrified to live here. I give this interview to the Channel 4 wholeheartedly to come out with my plight.”

This afternoon the Sri Lankan foreign minister, Professor GL Peiris, attended a press conference to discuss the proceedings at the Commonwealth ministerial action group, which ended today in London.

Sri Lanka, of course, is currently what is knows as “chair in office” of the Commonwealth. That means Sri Lanka should be taking the lead in defence of core Commonwealth values such as freedom of expression. Curiously, the question of the serious allegations against the Sri Lankan regime was not discussed.

Unknown faces follow me and track me whenever I return home after protest rallies.Balenderan Jayakumari

But we did ask him about the arrests and where these stood, given the Commonwealth’s core values. He said that he could not comment until the evidence had been examined.

“This will happen in due course. There is judicial scrutiny. And I think it is very wrong to come to a conclusion before the facts are looked at objectively and in depth.”

The problem is that in Sri Lanka, under the prevetion of terrorism act, “judicial scrutiny” can be an indefinite process.

– Callum Macrae is a journalist and director of No Fire Zone. You can follow @Callum_Macrae on Twitter