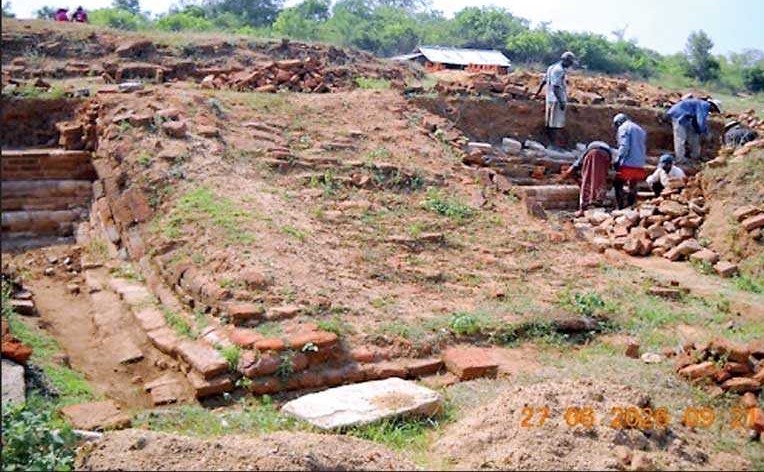 Image: A Presidential Task Force appointed for Archaeological Heritage Management in the Eastern Province, and focusing on Pottuvil in Ampara District, has more to its innocuous title than strikes the eyes.

I will tell you a little secret about archaeologists, dear reader. They all pretend to be very high-minded. They claim that their sole aim in excavation is to uncover mysteries of the past and add to the store of human knowledge. They lie. What they really want is a spectacular discovery, so they can get their names in the newspapers and inspire envy and hatred in the hearts of their rivals (Elizabeth Peters – The Deeds of the Disturber).

A Presidential Task Force appointed for Archaeological Heritage Management in the Eastern Province, and focusing on Pottuvil in Ampara District, has more to its innocuous title than strikes the eyes.

The timing of this appointment, crucially on the eve of a General Election and in the thick of a deepening economic crisis, plus the questionable credentials of several of the appointees and their ethnic homogeneity and ultra-nationalistic stance, carry the hallmark of a politically inspired mission to aggrandise territorial control and power over an area populated by Muslims.

Rajan Philips and Tisaranee Gunasekera, in two separate pieces in Colombo Telegraph, 14 June, have exposed the underlying politics of Buddhist ethno-nationalism behind this task force. This short piece adds some details to their otherwise critical and penetrating analyses.

From the time of independence, archaeology has been a powerful tool in the hands of Sinhalese nationalists to obliterate any vestiges of an ancient Tamil civilisation in Sri Lanka. This was part of the running ethno-nationalist battle between the Sinhalese and Tamil communities.

The demand for federalism by the Federal Party was viewed by Sinhalese nationalists as demand for a separate Tamil country (Federal Party leaders’ confusion between federalism when speaking in English and Tamil Aracu when calling in Tamil added to the controversy).

Archaeological excavations funded by governments with contestable interpretations about the discoveries occupied the intellectual energies of reputable academics like Prof. Paranavithana. While Sinhalese nationalists applauded his works, Tamil historians accused him of sacrificing his intellectual integrity at the altar of political expediency.

However, what the Sri Lankan archaeologists did was no different from what Israeli and Western archaeologists accomplished in Palestine. Theirs was a mission to strengthen Jewish historical claims to Arab lands.

Similarly, in India today, dubious archaeological evidence are advanced as proof to delegitimise and destroy Muslim historical sites and to dispossess Muslims of any claim to any part of the country. In Israel and India, archaeology is used as weapon to disenfranchise a whole community.

In Sri Lanka too, archaeological discoveries are being turned into instruments of dispossession. Lands located in areas where minorities are concentrated are in danger of being confiscated by governments under the pretext of managing archaeological Buddhist heritage.

With the defeat of the LTTE, archaeological activities in the North received fresh impetus, spearheaded by an ultra-nationalist and supremacist Buddhist clergy backed by armed forces. The main objective behind this activity was to justify and encourage Sinhalese encroachment into areas claimed by Tamils as their traditional homeland.

It is this issue that is preventing any reconciliation between the two communities. In this context, one should give credit to the Tamil Tigers who, with the Draconian control they exerted over the North for over 30 years, could have dug out and destroyed all Buddhist relics at any time had they wished to.

Instead, they left them untouched, because they must have believed that those ancient relics are a heritage of the whole humanity, and not belonged to the Sinhalese or Buddhists only. This was in total contrast to what the barbaric Taliban thought of the Buddha statues of Bamiyan before they dynamited and destroyed them.

Today, Buddhist supremacists, with support from President Gotabaya Rajapaksa and his power cartel, have turned their attention to the Eastern Province, where, according to 2012 census statistics, Tamils, Muslims and Sinhalese form roughly 40%, 37% and 23% of population respectively. In each of the three districts, Ampara, Batticaloa and Trincomalee, ethnic distribution is as follows:

Among these three, Ampara after independence, thanks to the Gal Oya Scheme with its Senanayake Samudra, has become the country’s rice bowl, and Muslims in this district are among the best paddy farmers in the island. Incidentally, it was a Muslim Parliamentarian M.S. Kariappar who baptised that irrigation tank as Senanayake Samudra at a public reception given to D.S. Senanayake.

Within the Ampara district lies Pottuvil with a land area of 265 km squared and a population of roughly 35,000, of whom around 27,000 are Muslims, 6,600 Tamils and only 880 Sinhalese. The 2006 Tsunami, with its high waves and sand shifts, exposed the Kotawehera Buddhist ruins along the west coast, and today two Buddhist temples, the Magul Maha Vihara and Mudu Maha Vihara stand majestically at the site of those ruins. Apparently, the President’s archaeological task force is expected to concentrate its excavation activities around these areas. There is no questioning the fact that ancient ruins should be protected, because they are not only part of a nation’s history but also are the heritage of humanity. This is one of the reasons why UNESCO was created, which keeps watch on preserving ancient heritage sites.

But, what is questioned and feared is the political motive behind certain archaeological activities. They have become weapons in the hands of ultranationalists to promote Buddhist settlements, which can upset the demographic balance and destroy ethnic harmony in the region. Discoverers can become disturbers.

Eastern Province is one province in the entire country where there is a rough demographic balance representing all three communities, despite imbalances within each administrative and electoral districts. However, in terms of land holdings, Muslims over all are at a terrific disadvantage.

For example, Batticaloa District, with 73% Tamils, 26% Muslims and 1% Sinhalese, has a total area of 2,632.7 km squared of which 106.3 km squared are water filled, which leaves a total land area of 2,464.4 km squared. Of this land, Muslims who form one quarter of the population hold only 30 km squared or less than even 1%.

In the province as a whole, Muslims with 37% population hold only around 3% of non-contiguous land. There is therefore acute land hunger in this community. What was true of the Kandyan peasantry on the eve of the 20th century is true of Muslims in the East in the 21st. This is the ground situation hidden under the superficial glitter of sporadic Muslim bazaars.

In Ampara district hardly any Muslim or Tamil was given land under the Gal Oya Scheme, and in the 1960s Muslims lost even a part of what they held when the Government grabbed their lands without compensation for sugar cane cultivation. Not surprisingly, it was this confiscation of land in Sammanthurai, Akkaraipattu and Addalaichenai, which later motivated few Muslim youngsters in late 1970s to organise politically and form the Muslim United Liberation Front, the antecedent of Sri Lanka Muslim Congress.

Later in 1990s, in the wake of archaeological excavations around the ancient Buddhist shrine in Dighavapiya, Muslims lost even more lands in the region. Archaeology had become an ammunition of dispossession as regards Muslims were concerned.

It is with this disappointing experience that Muslims in Pottuvil, are looking with askance the proposed archaeological activities of the new task force. Is it a sinister exercise by supremacists to aggrandise more Muslim land, colonise the area with outsiders, and upset the existing communal harmony in that region? Prevailing phobia about Muslims spreading under the watchful eyes of the President, his Premier and ministers, legitimise such questions and fear.

(The writer is from the School of Business and Governance in Murdoch University, Western Australia.)