Sri Lanka: Aragalaya will end in the victory of the people; This is an oath we can take in the name of truth, justice and equality! 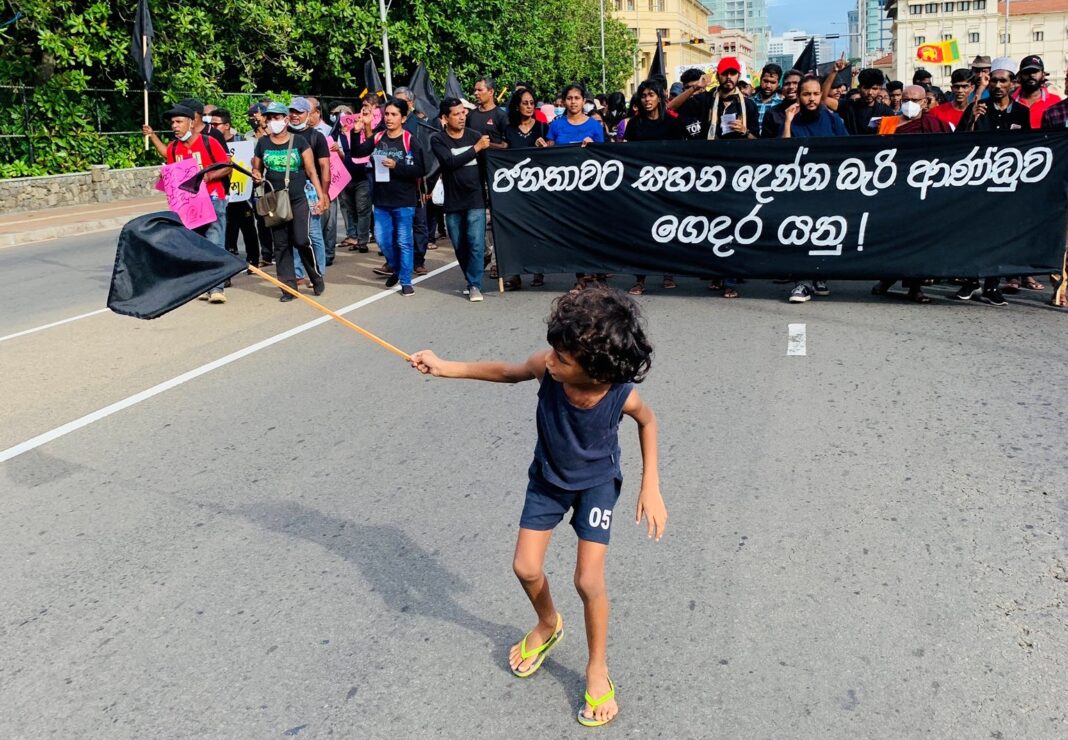 Our broken nation lies before us, caught up in an unprecedented social and economic tragedy of incomparable historic proportions.

Young and old spend hours and days queuing for petrol, gas, medicine.  Some have even died in these queues.

The cost of food skyrockets before our eyes, and our beloved farmers, unable to tend their fields, part with their precious harvest at humiliating prices.  Some of them then turn to suicide.

Our youth – waiting to move forward with their futures – are forced to waste the best years of their lives.

This crisis, created by political leaders who have no vision or plan for this country, has turned an entire population into human fodder.

Because the politicians of this country have so consistently failed to provide any kind of solution, a People’s Uprising emerged organically from amongst desperate and angry citizens.  This Aragalaya is held together by the demand for the resignation of Gotabhaya Rajapakse and the entire govt.

However, leaders, directly responsible for these problems, continue to allow the problems to escalate into crises.

The events of 9th April at Galle Face marked an iconic and decisive moment of the people’s aragalaya.

The Galle Face uprising, united by the rallying call of – Go Home Gota – is 50 days today.

Just one month into the Aragalaya, the former Prime Minister resigned and went into hiding.

At this point, when defeat of the President was within reach, Ranil Wickramasinghe, through a secret, high-level conspiracy, is appointed Prime Minister.

This cannot possibly solve the problems of the general public.  How can one man, already rejected by the people and another man, under tremendous pressure to step down, bring about a solution acceptable to the people of this country?

The rallying call of this Aragalaya – begun on 9th May – now 50 days stronger – the call of GO HOME GOTA – is as loud today as it was at the beginning.

The public demand of GO HOME GOTA continues to be echoed by tens of thousands of people who flock to Galle Face, and the hundreds of thousands who protest all over the country.

This Arayalaya has already won many victories for the people.  Most importantly, the people of this country have learnt how to agitate for change without resorting to ethnic or religious divisions.

While already some lives have been lost to the Aragalaya, there are still more lives which we know have been marked by this repressive Govt.

However, until the binding demand of this Aragalaya is not MET we will NOT STEP DOWN.

For 50 days the call of the Galle Face protestors has been that all protests be done peacefully.

The govt responded by inciting violence on peaceful protestors.

Today, the security forces are pursuing and harassing witnesses to these attacks with more determination than the instigators and attackers themselves.

We who have been engaged in an unending uprising for the past 50 days, reiterate the following people’s demands.

To our inhuman leaders.
Do not underestimate this Aragalaya.
This is the people’s Aragalaya.  Bear in mind that it is the people of this country we are accountable to.
If you choose to act in a way that ignores this people’s order, we will join forces with all the people of this country, and spread this non-violent protest, unconditionally across the entire land.
This Aragalaya will end in the victory of the people.  This is an oath we can take in the name of truth, justice and equality.
SSA Sri Lanka
Share
Facebook
Twitter
WhatsApp
Pinterest
Email