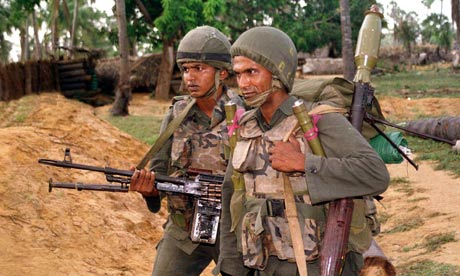 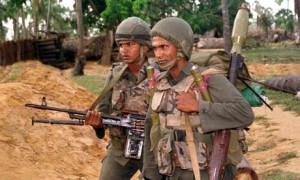 The TNA will complain to the international community if the military continues to get involved in the educational activities of Tamil students, says its MP Suresh Premachandran.
The party condemns the appointing of soldiers to teach the Sinhala subject at schools in Kilinochchi and Mullaitivu, he says.

He questions as to why the so-called democratic government involves the military in education, which is not seen even in countries that have military regimes.

The MP adds both students and their parents are concerned about this development.
SLM

In a hitherto unheard experiment in conducting genocide, the Sri Lanka government has appointed its occupying military to teach Sinhala as second language to Tamil school children in Vanni. The Sinhala military personnel went in uniform to schools to report as Sinhala teachers and they claimed that they had permission from the SL education authorities to do so, news sources in Vanni said. The genocidal military teaching Sinhala goes parallel to the teaching of Theravada Buddhism to Tamils. The Sinhala military also aims to be in direct touch with the Tamil school children, the news sources further said. Already there were strict instructions to schools in Vanni that no functions could take place without inviting the occupying military and garlanding them publicly.

Commenting to TamilNet, TNA parliamentarian Suresh Premachandran said: “Occupying soldiers getting appointed as school teachers is never heard of before except in this island.”

Meanwhile, Buddhist schools now come up in Jaffna with the patronage of the occupying military. Sinhala is taught in these schools. In a leading institution of Eezham Tamils, Jaffna Hindu College, a Buddhist monk has come to do the job.

News sources in the Up-Country said that similar activities of teaching Buddhism and Sinhala to Tamils of Indian Origin take place in full swing there. Large-scale Sinhala military cantonments are also planned in places like Talawakele where the Tamils of Indian origin live in large numbers.

Genocidal Sri Lanka that cites the three-language recommendation of the LLRC as smokescreen, never attempts island-wide teaching of Tamil to Sinhala children. The genocidal State could never convince the Sinhalese to learn Tamil.

A year ago, in January 2012, India’s former President Abdul Kalam visited Colombo to ‘inaugurate’ the language policy of genocidal Sri Lanka and to eulogise it.
TN