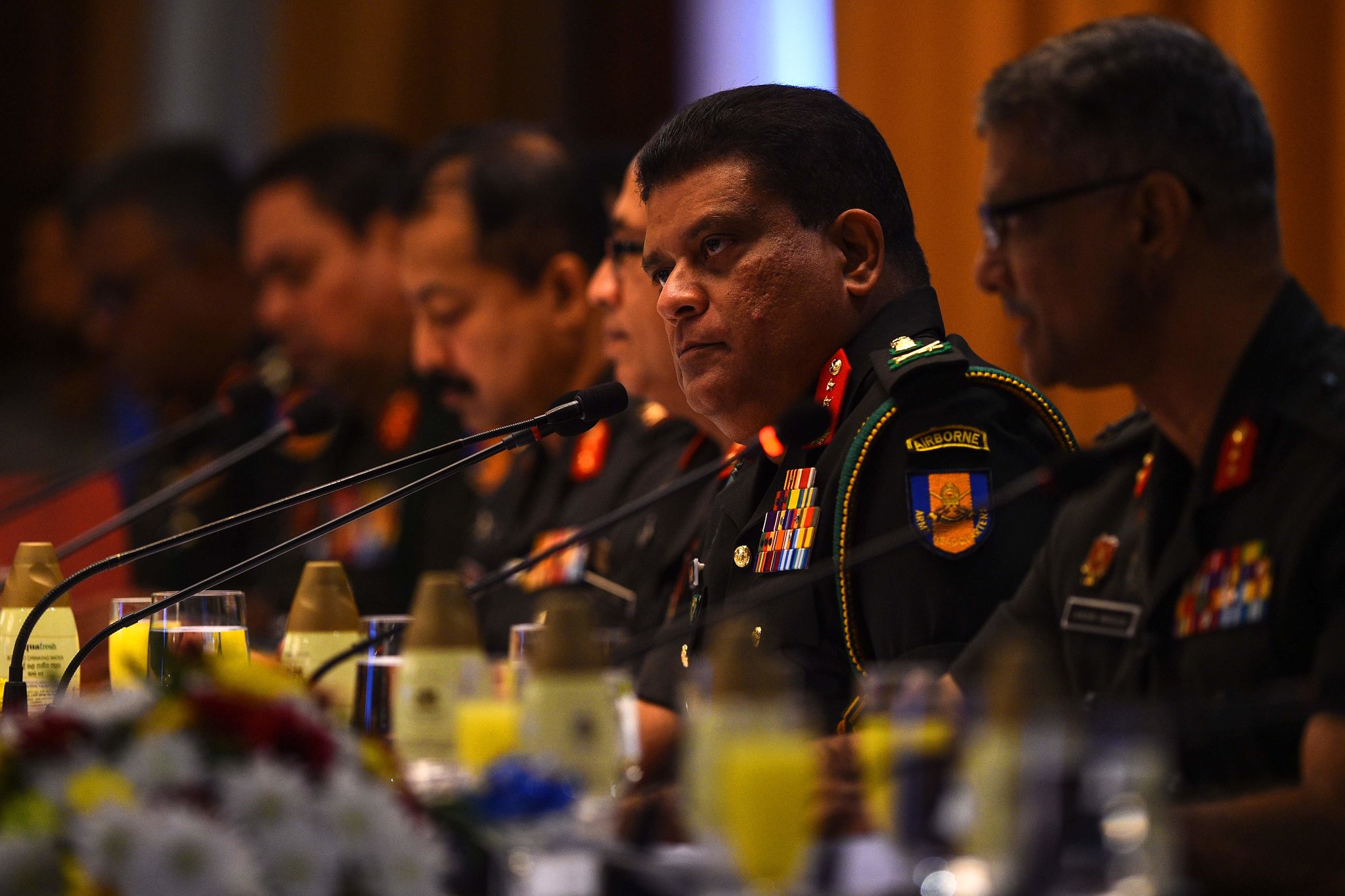 President Gotabaya Rajapaksa today appointed Army Commander Lieutenant General Shavendra Silva to spearhead the National Operation Center for Prevention of COVID- 19 outbreak. Militarisation of civilian affairs has been on the increase under Gotabaya presidency. Fight against coronavirus outbreak is has provided an ample opportunity to expand this process. The military has taken over issuing information on the Covid 19 situation in the country and usual police duties like tracing infected persons have been given to military intelligence agencies. In the last few days, MoD warned it will take legal action against those who are spreading rumors and posting false and misleading information via social media platforms and other digital media sites on coronavirus to create panic among people.

Below is the statement issued by the Presidential media unit on the National Operation Center for Prevention of COVID- 19:

The Army Commander Lieutenant General Shavendra Silva has been tasked to spearhead the National Operation Center for Prevention of COVID- 19 Outbreak, which has been set up on the directive of President Gotabaya Rajapaksa at No. 1090, Sri Jayewardenepura, Rajagiriya.

This Centre will coordinate preventive and management measures to ensure that healthcare and other services are well geared to serve the general public.

All officials depending on the exigency of services will be utilized for the services coordination under National Operation Center and they should be available on call service.

Meanwhile MoD has warned that it will take legal action against rumor mongers on COVID- 19 via social media.

The Defence Ministry has decided to take legal action against those who are spreading rumors and posting false and misleading information via social media platforms and other digital media sites on coronavirus to create panic among people.

The ministry took this decision after receiving several public complaints to the ministry and the Police on false and misleading statements by some individuals and groups to create a tense situation on on-going efforts of the government to control the coronavirus outbreak.

“The Government has taken all the necessary measures to control the spreading of the COVID -19. In this crisis situation, the entire country needs to be united to protect lives of our people from the virus. It is very disappointing to see how some interested parties and individuals are spreading rumors to mislead people,” Defence Secretary Maj.Gen. (Retd) Kamal Gunaratne said.

He said the government would not tolerate the behavior of such people, who were posting false and misleading information on social media platforms.

“The Police will take legal action against them,” the Defence Secretary said.

The Police Spokesman SP Jaliya Senaratne told the defence.lk that two persons who have posted alleged false and misleading posts on their Facebook accounts have already been arrested.

According to the Police Spokesman, a maximum of five-year imprisonment will be given for those individuals for spreading or circulating rumors and false information via social media platforms under the No.24 of the Computer Crimes Act of 2007.

Over 170 Sri Lankans from Italy and Korea evade quarantine

The Ministry of Defence requests all Sri Lankans who arrived from European countries including UK, Iran, Italy and South Korea from March 1 to 15 to register themselves at the nearest Police station or inform the Police, immediately.

Defence Secretary Maj.Gen. (Retd) Kamal Gunaratne, seeking support from them, said this was done to protect the country’s population from the coronavirus outbreak.

“There are over 170 passengers, who have returned to Sri Lanka from Korea and Italy, are living with their families and have not been subjected to quarantine process. As a precautionary measure, we need to get them into the screening process to detect positive cases to prevent coronavirus spreading further,” he said.

Those who have not been subjected to 14-days quarantine process have to call 119 and inform the Police about their details.

“The passengers, who had arrived from coronavirus-hit countries and hiding to evade quarantine, will be instructed by the Police and SLA soldiers in the respective areas to submit the relevant information to them to be quarantined in their own houses by staying indoors,” the Defence Secretary said.

Maj.Gen. Gunaratne urging, those arrived from coronavirus hit countries to come forward to declare that they had returned from European countries, including UK, Korea, Iran and Italy, said the public needs to support the government in its effort to contain the spreading of the virus.

“They will not be taken to quarantine centres but will be done at their own homes with the help of the Public Health Inspectors,” he assured.

If they still fail to heed to the request, legal action will be taken under the Quarantine and Prevention of Diseases Ordinance by the Police against them .