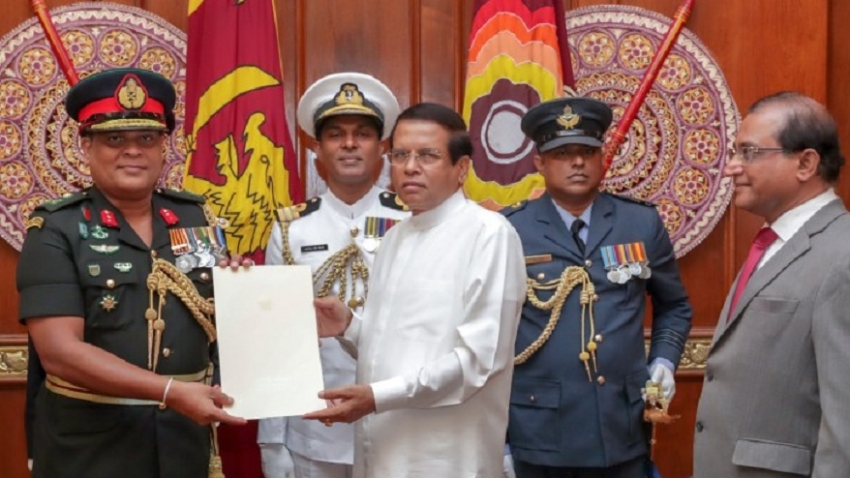 The appointment has come under fire from local and international organisations, including the United States of America. It is understood some more countries will join the USA in expressing their disappointment.

As reported by the Colombo Gazette:

“The United States is deeply concerned by the appointment of Lieutenant General Shavendra Silva as Army Commander.

The US Embassy in Colombo headed by Ambassador Alaina Teplitz said that the allegations of gross human rights violations against him, documented by the United Nations and other organizations, are serious and credible.

“This appointment undermines Sri Lanka’s international reputation and its commitments to promote justice and accountability, especially at a time when the need for reconciliation and social unity is paramount,” the US Embassy in Colombo said.” 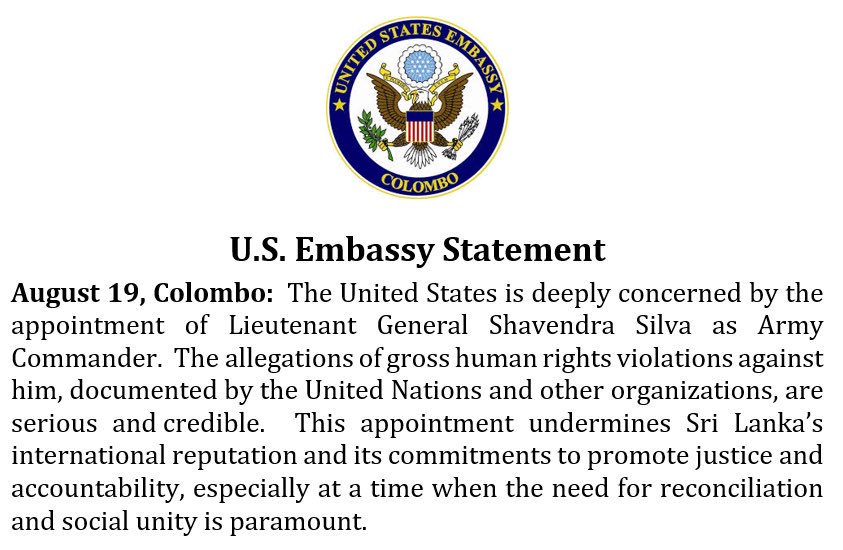 Meanwhile issuing a press release titled “Sri Lanka betrays its people by promoting alleged war criminal to head its army.” The International Truth and Justice Project said that :
“Sri Lankan President’s decision to appoint a notorious alleged war criminal, Major Genral Shavendra Silva, as Commander of the Army is immensely damaging to the country and marks the end of any reconciliation process, given the allegations of war crimes and crimes against humanity against him.
In January this year the International Truth and Justice Project published a 137-page Dossier on Silva which showed there was more than enough evidence to charge him with war crimes and crimes against humanity. Instead he has now been promoted to the most powerful job in the army just months before important elections.
“This is a man who has shown his willingness to violate international law,” said ITJP Executive Director Yasmin Sooka, “his promotion will spark fear throughout the country but especially among the hundreds of thousands of Tamils who suffered immense loss in 2009 when Silva allegedly oversaw attacks on civilian sites”.
Shavendra Silva has also never been held accountable for his role in crushing the Janatha Vimukthi Peramuna (JVP) or People’s Liberation Front uprising in the late eighties during which there were credible allegations of summary executions, enforced disappearances, torture and sexual violence, and the detention of thousands of Sinhala youth. Some
of the violations occurred in Matale where Silva was based, serving under Gotabaya Rajapaksa who commanded the first Gajaba Regiment there.
“After so much bloodshed Sri Lankans need to hold their leaders accountable in order to stop the repeated cycles of violence. Silva’s promotion however sends a message of total impunity,” added Ms. Sooka.  Silva’s appointment also throws into question US assistance to the Sri Lankan Army which is subject to Leahy Laws which prohibit the U.S. from
providing military assistance to foreign security force units that violate human rights with impunity. The appointment could also potentially impact Sri Lanka’s recent resumption of deployment of UN peacekeepers. Peacekeeping deployment was put on hold for most of 2018 while more stringent vetting arrangements were put in place to ensure
soldiers who had fought in units (such as Silva’s 58 Division) in areas where alleged war crimes took place in 2008-9 were screened out.
“I imagine there has been intense diplomatic lobbying to stop Sri Lanka taking this step – with all the consequences explained. It’s striking an own goal for any country to take this step and frankly disheartening particularly for the Rule of Law,” added Sooka. “I very much hope Sri Lanka’s allies will now take a principled step and ensure Major General Shavendra Silva is not granted a visa to travel abroad even on official duty.”
A local think tank the Centre for Policy Alternatives too came out against the appointment of Sahvendra Silva.

” The Centre for Policy Alternatives (CPA) is deeply concerned by President Maithripala Sirisena’s  appointment of Major General Shavendra Silva as the Commander of the Sri Lanka Army (SLA) and urges the Government of Sri Lanka to take immediate steps to review this appointment in light of the serious allegations levelled against Major General Silva. In January of this year, CPA raised similar concerns when Major General Silva was appointed the Chief of Staff of the SLA.  We are disappointed that the present Government, which committed itself to security sector reforms and accountability, has taken no action to address these concerns. Today’s appointment is in effect a repudiation of the promised reforms. It demonstrates a clear disregard for human rights norms, and will facilitate the further entrenchment of impunity in Sri Lanka.Major General Silva was the Commanding Officer of the 58th Division of the SLA during the last stages of the war. Several public documents have levelled allegations against him of violations of International Humanitarian Law (IHL) and International Human Rights Law (IHRL). These include:

The above are a glimpse into the serious allegations levelled against Major General Silva. Despite their gravity, these allegations have not been properly investigated by either the previous or current Government. In fact, Major General Silva’s series of promotions demonstrates how these alleged violations appear to be rewarded. This also stands against the background of the Government’s own commitments made on security sector reforms and accountability, as part of UNHRC Resolution 30/1.

These issues are further compounded when considering the new security challenges Sri Lanka faces following the Easter Sunday attacks, a decade on from the end of the war. CPA notes that the on-going proceedings before the Select Committee of Parliament to look into these attacks of 21st April 2019, demonstrates the need for urgent reforms in the security and intelligence sector. The appointment of Major General Silva to the senior most position in the SLA whilst facing serious allegations, is unlikely to instil public confidence in the genuineness of the Government’s commitment to initiating the necessary reforms and to addressing impunity.

In such a context, whilst urging the Government to review the present appointment, CPA also urges the relevant Parliament Sectoral Oversight Committees to take a more robust role in monitoring the work of Major General Silva and the SLA and to take action to prevent Sri Lanka from sliding further towards a state where human rights violations are ignored and impunity thrives.”