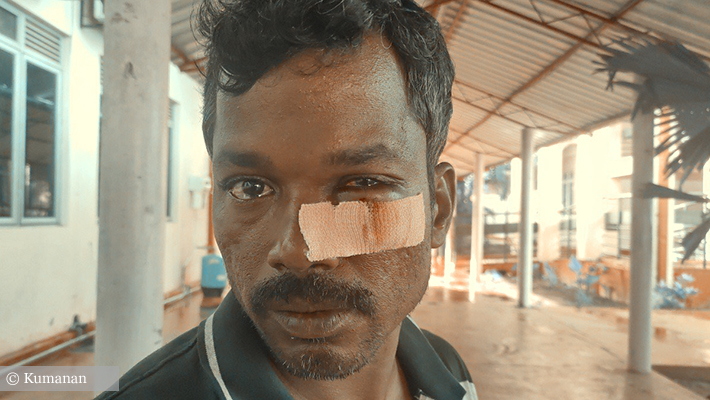 Police in Sri Lanka have once again received a complaint against military officers occupying the Mullaitivu district for assaulting a Tamil with a palm stick wrapped in barbed wire.

The victim, a driver has been admitted to the Puthukudiyiruppu base hospital with visible injuries to his face.North

This is the second attack in two months where the military has been reported to have used barbed wire wrapped palmyra fronds to assault Tamil civilians in war-torn Vanni.

The victim, 41 years old Navaratnam Uthayaseelan told journalists at the hospital that military intelligence officials in civil attire had stopped the tipper lorry he was driving in the Kaiveli area early in the morning and questioned what he was transporting.

He has told the officers, apparently from the 682 brigade under 68 division, that the tipper was empty.

The driver has been forced to alight and beaten up. According to the complaint to police in Puthukudiyiruppu, at least two of the officers reeked of alcohol.

Later in the day men who identified themselves as military officers have been calling friends and family members in a bid to force Uthayaseelan to withdraw the complaint and arrive at a compromise.

Reports exposing the brutality was promptly rejected by the military as a bid by journalist in exile to “tarnish the image of the Security Forces in the North and East”.

It soon backtracked with three soldiers apologising for the assault. They were all from the 682 brigade.