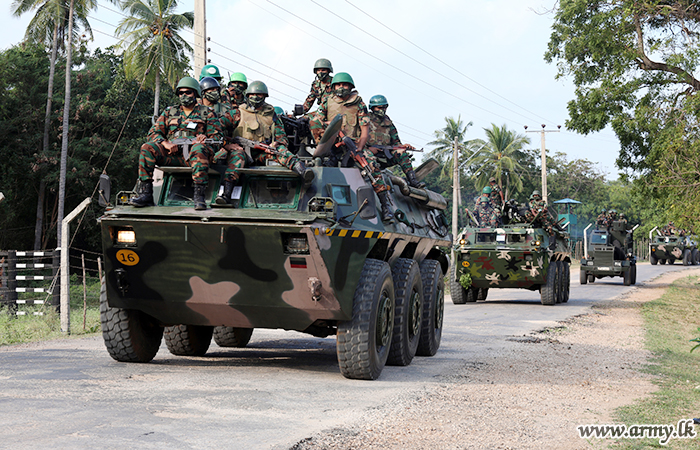 President Ranil Wickremesinghe in his capacity as the finance minister presented 2023 budget in the parliament on Monday (14) which was expected to signal the policies needed to move out of the county’s economic crisis including hard reforms to satisfy the International Monetary Fund (IMF) to help approve an already agreed $2.9 billion loan.

High defence budget comes when the country’s armed forces are not fighting any external or internal war. Wickremesinghe, however, allowed armed forces personnel, other than special categories, to retire after 18 years of service. The earlier duration for voluntary retirement was 22 years.

“The elephant in the room is defence. We are spending over 500 billion rupees to maintain the triforces and police. That’s a huge amount of money,” Sujeewa Mudalige, the Chief Executive Officer at PricewaterhouseCoopers told a post-budget forum on Tuesday (15).

“It’s 13-years since the end of the conflict. I Think there needs to be a review on this. The quantum of defence doesn’t mean you are secure. If you take 10% of defence at 50 billion rupees to double Samuradhi or imagine health or education getting an additional 50 billion, what transformation will the country get?”

Since the final years of the war, Sri Lanka has always given the top priority to defence and the highest budget allocation had always been given to it because of a large number of armed and police forces, who were mainly recruited during the war.

However, the public have now started to raise questions about if high public resources allocation for the armed forces is rational as there is no war.

“The president spoke of a youth led economy. So imagine what an extra 50 billion would go to the national vocational training? In a few years our defence bill will be at a trillion rupees. We got to review this,” Mudalige said.

“We are happy with one aspect, the military retirement age being brought down to 18 years of service. But I believe it should be further reduced to 10-years because after they are 45 (years), it’s hard to train.”

Military since the end of the war has been in forefront in rescue service during time of disasters.

A negative perception about military has been on the rise since armed forces had been allegedly involved in attacking independent protesters in July near presidential secretariat and disperse them from the site where they protested for more than four months.

“Public sector expenditure rationalization is difficult. But my fervent request is we need to look at defence as a starting point,” he said adding that when the economy is contracting, a 64 percent revenue is a very difficult task referring to Wickremesinghe’s tax hike target.

Dushni Weerakoon, Executive Director of the Institute of Policy Studies of Sri Lanka (IPS) said the government should release resources from the expenditure side that is supporting unproductive activities.
“The public sector is number one, whether it’s the armed forces or general public service and reallocates those resources to sectors that drive growth as well as the poorer segments of the population,” she said. (Colombo/Nov15/2022)
By MAHADIYA HAMZA/EN
Share
Facebook
Twitter
WhatsApp
Pinterest
Email