SRI LANKA: An innocent man died after being illegally arrested and tortured by the Polpithigama Police 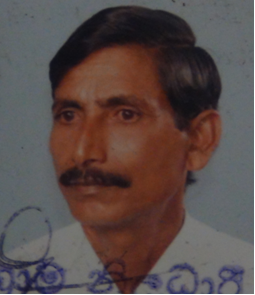 The Asian Human Rights Commission (AHRC) has received information that Mr. Vidana Mahaduralage Somarathne, a farmer by possession, was illegally arrested, detained and severely tortured by the four police officers attached to the Polpithigama Police on 20 March 2013 at Ma Eliya Junction.

Mr. Vidana started screaming in pain in the early morning of 21 March. He was taken to the Polpithigama District Hospital. The on duty doctors admitted him to the Intensive Care Unit. He passed away at around 1 pm on 21 March. Despite being aware that the victim had been severely tortured the Judicial Medical Officer claimed that the cause of Mr. Vinda’s death was a heart attack.
His son Mr. Anuradha campaigned vigorously for a second port mortem examination which was eventually granted by a Magistrate but the results have not yet been made public. The victim’s relatives made petitions to the police authorities and the Human Rights Commission of Sri Lanka seeking remedies. In reality, no action has been taken by these officers.

This case is yet another illustration of the exceptional collapse of the rule of law in the country and the fact that the police will do everything in their power to cover up a death by custodial torture.

Mr. Vidana Mahaduralage Somarathne (58) of No461/1, Bunt Junction, Maeliya, Polpithigama in the Kurunegalle District was illegally arrested, detained and severely tortured by the four police officers attached to the Polpithigama Police on 20 March 2013 at Ma Eliya Junction.
According to Mr. Vidana Mahadurayalage Anuradha Champika Somarathne, the son of the deceased Mr. V.M. Somarathne succumbed to the injuries he suffered due to the severe torture he was forced to endure while he was in the custody of the Polpithigama police on 21 March 2013. Mr. Somarathne was married and a farmer by profession. Four uniformed police officers alighted from the two motor bikes and illegally arrested Somarathne at around 7 pm. The arrest was witnessed by several people on the side of the Maeliya junction.

Mr. Jayaweera Aponsu who was one of the witnesses stated that Somarathne, was beaten at the time of the arrest. According Mr. Aponsu Somarathne was beaten about the back and his hip with a pole despite the fact that he offered no resistance. Somarathne started pleading loudly to the witnesses, asking that they rescue him. Then the officers dragged and pulled Somarathne towards one of the motor bike took him to the Polpithigama Police Station. Then Mr. Aponsu informed Somarathne’s son, Anurudha and told him as to how his father had been beaten. Immediately upon hearing the news Anuradha went to the police station where he found his father lying on the floor of a cell. He went to the reserve officer and asked why his father had been arrested and the officer stated that they arrested him on suspicion of the possession of liquor without a legally valid license. Somarathne was released on police bail at midnight and his son took him home.

The following day, 21 March 2013 while Anuradha left to go to his work place early in the morning at around 8.30 am, one of his friends, Samantha, called and told him that his father’s condition had worsened. He immediately returned home and he rushed his father to the hospital by three-wheeler. While they were on the way to the hospital Somarathna screamed in pain while holding his ribs. When Anuradha asked what was wrong his father told him that he had been tortured in police custody?

Somarathna revealed that he was tortured by four police officers including, Police Sergeants Sumith, Amarasuriya and another one. Then Anuradha told his father to inform the doctor of this as well. Mr. Vidana Mahaduralage Somarathna was admitted to the emergency ward of Polpithigama District Hospital and as his condition continued to worsen he was transferred to the Intensive Care Unit. At that time Somarathne told his son that the police officers would try to cover up the incident and that he should at least complain to Human Rights Commission of Sri Lanka (HRCSL).

After Somarathne was transferred to the ICU Anuradha went at home at around 11 am. When he returned to the hospital at around 1.30 pm he was informed that his father had died. Anuradha approached the District Medical Officer (DMO) who told him that they had done everything possible to save his father’s life. However, when Anuradha asked for the cause of death the DMO replied that he could not ascertain the direct reason and if he wanted to he could ask for a post mortem and a proper JMO inquiry.

Anuradha went to the Polpithigama Police Station and made a complaint asking for a post mortem mentioning his father’s statement about police torture before he died but the police officer refused to include it in the report. One hour later Police Office Janaka called and informed them to go to the Polpithigama District Hospital as the Magistrate will come for the inquiry. At that time he made a statement before the Magistrate about the police torture his father told him about before he died. At that time the Assistant Superintendent of Police (ASP) of the area told him that as the Polpithigama mortuary did not have a fridge the body would have to be transferred to the Kurunegala Teaching Hospital. After discussions with the DMO, the ASP gave permission and the body was transferred to the Kurunegala Hospital under police security.

The following day, 22 March, at around 9.00 o’clock Anuradha returned to the Kurunegala Hospital and at that time there were four police officers from the Nikaweratiya Police Station for the inquiry. Then the Judicial Medical Officer (JMO) asked for the reports of the Polpithigama Hospital as without those he cannot start the inquiry. However, before checking those reports he started the inquiry and told Anuradha to go to his office where he told the victim’s son that the cause of death was a heart attack. Anuradha refused to accept that and told the doctor what his father had told him to about police torture. He also said that he himself had witnessed the pain and anguish his father had been in. Then the JMO said that they would have to remove some skin of the area around the victim’s ribs and examine it again. After 20 minutes later the JMO called Anuradha and his uncle and showed them the area under the right hand shoulder where there were 3 marks on the ribs. He admitted that Somarathna had been assaulted but could not give that as the cause of death. After that the police officer who came from the Nikaweratiya Police Station recorded a statement from Anuradha again. In that statement Anuradha refused to accept the JMO’s statement that his father had died of a heart attack and again mentioned the assault by the officers of the Polpithigama Police Station.

Moreover, when Somarathna’s body was embalmed the person doing the job also noticed that there were two broken ribs. Anuradha went and met ASP of the Mahawa area at around 5 pm and made a complained about the suspicious death of his father. The ASP told him that there was no point in complaining about the JMO’s inquiry as they will normally never change their reports. He told Anuradha to go and complete the funeral arrangements.
Refusing to give up Anuradha met the Deputy Inspector General (DIG) of Police of Kurunegala and asked for another JMO inquiry. The DIG explained that he could ask for another inquiry from Colombo by the courts. There were several eye witnesses and some of them gave their statement as well.

Anuradha states that his father was illegally arrested and brutally assaulted and that due to this torture his father died.

The relatives complained to the Inspector General of Police (IGP), National Police Commission (NPC), Attorney General (AG) and Sri Lanka Human Rights Commission (HRCSL) on 25 of March, 2013 regarding the death by custodial torture of Somarathna and requested impartial and independent inquiry in to the incident. But until now any of these authorities have taken any action on their complaints.

The case on the death inquest is still going on before the Magistrate of Mahawa regarding the killing of Somarathne. The case has been registered with the reference of No: B/200/2013.

When on 27 March case was called before the Magistrate’s Court, the lawyer representing the relatives of the deceased, Vipula Chandarsekara, requested the Magistrate to exhume the body and called for a fresh JMO’s report by under the senior JMO. The request was upheld by the Magistrate and he ordered to conduct the evidence on 3 April after exhumation. Further the Magistrate ordered the Police to guard the burial site until the body was exhumed.

Anuradha and his relatives appeal for justice.