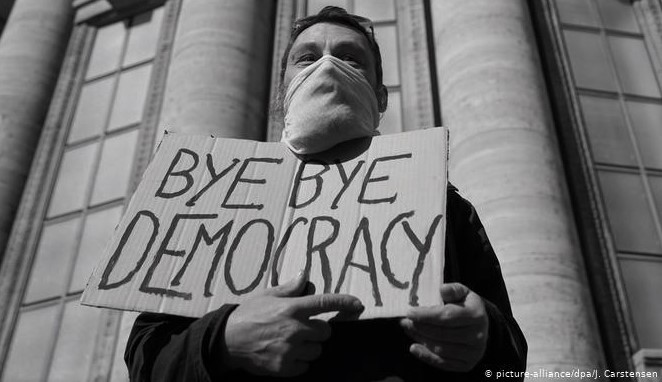 It is no coincidence that the increasingly not-so-insidious growth of Sri Lanka’s anti-democracy virus, first reflected on in these column spaces last month, has kept apace with the exponential rise of coronavirus infected individuals in the last ten days. As transparency diminishes, so does accountability. This is so in relation to pandemic controls of testing, isolating and containing as much as in making sure that state officers act in accordance with the law in arresting people or in addressing the hunger of the poor.

That column (Covid 19 and Sri Lanka’s anti-democracy virus, March 15th 2020) was in the last printed edition of this newspaper before an island-wide curfew, of dubious legality but endured due to the extraordinary threat facing the nation, compelled the presses to still their roar. Along with that silencing, other aspects of our repressed but still defiant resistance movement also lapsed into silence. To employ a useful oxymoron, that silence was so deafening that law enforcement officers felt emboldened enough, as I remarked last week, to arrest an attorney-at-law in circumstances that even a full week later, give rise to grave concerns.

No explanation has been offered as to why this arrest took place following a visit to his residence by criminal investigation officers even though contact had initially been made by the Health Ministry. Reasons for this arrest have yet not been clarified with the police only repeating this Friday that the attorney had ‘direct contact’ (the Island, April 24th 2020) with key suspects implicated in the Easter Sunday attack carried out by Islamist jihadists this same time last year.

But, surely as the police perchance may be painstakingly re-educated, attorneys do need to have ‘direct contact’ with their clients. As such, offering only this ground as a purported basis for the arrest violates every known canon of penal law and constitutional freedoms. Law enforcement authorities need to publicly release the document relevant to the arrest, Detention Order or other. This is imperative, in the first place to specify the exact provision of the exact law under which arrest has taken place and secondly, to enable scrutiny of the grounds of arrest.

Far more needs to be put on record regarding murky actions of the police. The wary statement released by the Bar Association of Sri Lanka cannot just rest there. If the Bar does not exert itself beyond that timidity in egregious circumstances which strike at the root of legal professional duties, it may as well go into permanent lockdown as it were. And for those inclined to rationalise that this is an isolated act limited to a ‘Muslim’ attorney advising suspects of one of the most heinous terrorist attacks on Sri Lankan soil, this is far from the case.

Twelve months after this unconscionable attack on innocents, Sri Lanka’s foremost political and intelligence authorities responsible for criminal negligence in allowing this crime to happen, including the President and the Prime Minister of the time, remain untouched by liability. Instead a police chief and a defence secretary is jailed as part of a charade and now, an attorney is arrested. Ridiculously and quite wrongly, ruling party propagandists argue that then President Maithripala Sirisena now part and parcel of their ‘Pohottuwa’ ranks cannot be called to account in courts due to the immunity afforded to Presidents by the Constitution. A wealth of legal precedent affirming the contrary is airily dismissed just like that.

Indeed, this issue goes beyond the arrest of an attorney and challenges the entire edifice of law on which this country functions. The coronavirus pandemic has now well and truly metamorphised into a anti-democracy viral pandemic which threatens the core of our society. As relief supplies to desperate people in curfew locations are politicised, as supply routes of essential services are handed out as gifts to ruling party favourites and as huge amounts of money are channeled into ‘covid-funds’ raising unnerving recollections of misappropriation of tsunami funds in that famous ‘Helping Hambantota’ account, the lack of regulatory and legal transparency is stark.

We are now advancing one and a half months into ‘exceptional’ measures. Whether it is the seizure of vehicles of ‘curfew violators’ requisitioned by the police for ‘pandemic duty’ or the jailing of their owners, the legal basis of these actions must be clarified in the absence of the declaration of a state of emergency under the Public Security Ordinance or our ancient laws relating to epidemics. Merely parroting that rogues in the previous Parliament should sit again does not suffice to explain the absence of law.

Whether the previous Parliament should sit or not, whether the Constitution provides for it or not and how elections can constitutionally be determined on a date that is beyond the prescribed time period of a new Parliament sitting after the dissolution of its predecessor are weighty matters that must be brought before courts. These are not flotsam and jetsam to be bandied about in the hysterical domains of social media or by political hatchetmen who are unable to grasp a legal point with minimum understanding.

In fact, one is manifestly at a loss to understand why the Elections Commission does not simply invoke the jurisdiction of court without having exposed itself to referring the matter to the President and to be (rudely) rebutted by his Secretary. Reference may be usefully made to advice by the Supreme Court more than two decades ago in a legal challenge to the postponement of provincial polls brought by a legal team of which this columnist was a part appearing pro deo when public interest litigation was true to its name, unlike highly funded and politically motivated efforts evidenced currently. Reprimanding the Elections Commissioner (at the time) for postponing provincial polls contrary to the Constitution, the Court pointed out that advice may have been sought from the Court if he was uncertain.

But, as the late Justice MDH Fernando observed in writing for the Court,  ‘the material available to this Court indicates that he made no effort to ascertain the legal position, or to have recourse to legal remedies’ (Karunatilleke v Dissanayake, 1999 1 Sri LR 157). Today, that judicial reasoning on the power and independence attached to elections officials has become even stronger with the Elections Commissioner giving way to the Elections Commission through constitutional amendments.

Yet sense and sensibility appears to have fled the country in wake of the coronavirus. Even as the judiciary and the Department of the Attorney General remain under lockdown, interpretation of the Constitution is appropriated by usurpers. Monks expound on what the Constitution enables the President to do in exceptional situations and party lawyers solemnly advocate the application of the doctrine of neccesity without heed to the exceedingly dangerous nature of such loose advocacy

Certainly these are no ordinary times. But the law and the Constitution must stand above all precisely in times like these. To forfeit the law during a pandemic is to abandon any hope that we may fully recover even when the immediate health threat has lessened. Above all, our courts and legal processes must return to democratic functionality, sooner the better.