Sri Lanka: Amending the Constitution will be the first step to autocracy – Kumar David 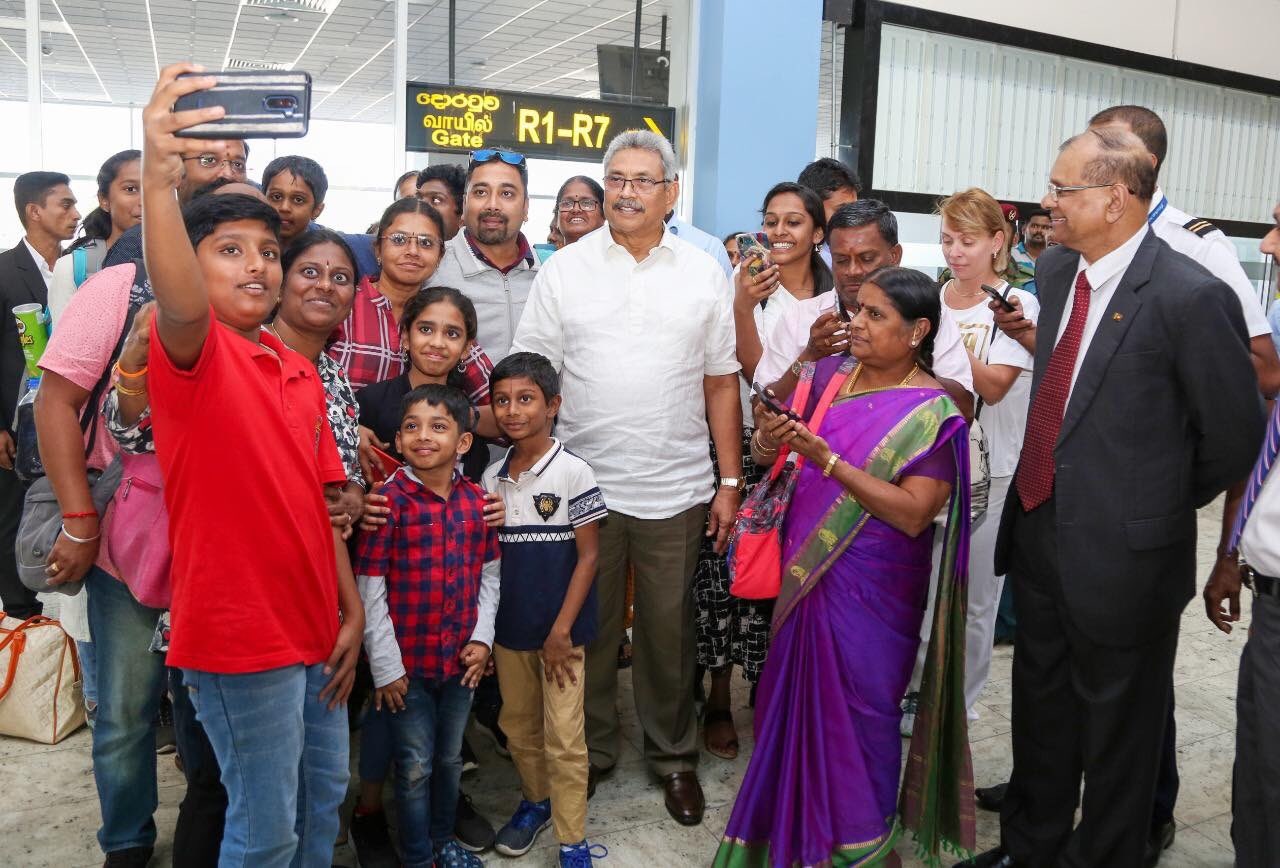 The most important portion of President Gotabaya Rajapaksa’s statement in Parliament on Friday 3 January 2020 was his commitment to amend the Constitution. [Island, Saturday 4 Jan print, or http://www.island.lk/index.php?page_cat=article-details&page=article-details&code_title=216470 ]

There were many commendable things in the statement as always, like motherhood and apple-pie that most people agree with. A non-apple-pie matter that points to the future I quote from the news report:

“Delivering his government’s policy statement at the inauguration of the Fourth Session of the Eighth Parliament, the President said the existing constitution had given “rise to many problems at the present time because of its inherent ambiguities and confusions. In order to safeguard the security, sovereignty, stability and integrity of our country, it is essential that changes be made to the existing constitution”. He said that reforms would be introduced to the Constitution to “establish a strong executive, legislature and independent judiciary that can ensure the sovereignty of the people”.

The writing is on the wall; let’s cut through the slosh about legislature and the decorations about judicial independence and get to the point. GR wants a “strong executive” presidency, therefore 19A which restricts his powers will be repealed and to do so he MAY need a two-thirds majority at elections later this year. (I will explain in a moment why I say MAY and not ‘may’). Much as I have said, to the displeasure of my friends on the Left, in my post-election columns ‘a new president needs a chance to prove himself’ and argued ‘be patient, wait and see, alleged human-rights violations by the military on his watch notwithstanding’, this matter falls into a different category. It is about something he has declared he intends to do. And it is bad!

The JR Constitution is egregious, no ifs and buts. In the JR era it was the vehicle of an autocrat. MR indulged in absurd abuses of power and the executive presidency was a canopy papering over the worst corruption in any period of Lanka’s history. In a word the “strong executive” presidency has been a curse upon this country and the people must fight tooth and nail against the plague. The worst about 19A is that it did not entirely abolish the executive presidency and pussy-footed creating a neither here nor there pudding. The Westminster model has drawbacks, American tripartite balance-of-power is unusable in Lanka because of the debility of our institutions and toothless timidity of parliament and judiciary. Hence the best of a bad hand for Sri Lanka is to opt for the Westminster model with a part first-past-the post and a part proportional (PR) electoral scheme.

Saint Augustine is a man after my heart; I recite his prayer whenever needed: “Oh Lord give me chastity, but not yet”. Likewise though the all-PR system is defective I do not want it put aside, yet. My reasons are straightforward. (a) The existing PR scheme makes it near impossible for any party to secure a two-thirds parliamentary majority; (b) I am opposed to an amendment to create a strong executive presidency; (c) only a bipartisan consensus can achieve this in the existing scheme; (d) hence to block the return of a “strong executive” presidency it is necessary to prevent changes in the electoral method. Life and death imperatives take precedence over imagined “Vistas of Prosperity and Splendour”. The existing PR scheme must be retained for now and the electorate must do its duty and deny GR-MR-SLPP-SLFP cum Dead-Left a two-thirds parliamentary majority.

That is desirable but far from safe since the blight of a despotic constitution cannot be defeated so easily. My pro-Gota friends cheerily remind me “Oh come on Kumar, we will buy them if we don’t get two-thirds at the election. You know how easy it is to buy UNP, Muslim Congress, Makkal Congress and even the odd TNA parliamentarian”. This, dear reader, I am reluctant to deny; I do not think any better of our parliamentarians than you do.

The threat however is a great deal more serious than that. Think of how authoritarians slide into office, and then, consolidate their grip. In Reichstag elections throughout 1932 and 1933 Hitler’s Nazis polled between 33% and 37%; never close to 50%. However having gained control of the Reichstag through alliances and persuaded President Hindenburg to appoint Hitler as Chancellor they enacted statutes which were used with devastating effect to destroy all opposition. Power grabs by other despots too illustrate, how given a foot in the doorway, control is tightened till both de jure and de facto of a “strong executive” is consolidated. How foolish the German liberal classes were is shown in a ‘great’ publication Frankfurter Zeitung, Jan 1933: “It is hopeless misjudgement to think one could force a dictatorial regime upon the German nation. The diversity of the German people ensures democracy”! Therefore my “MAY” a few paras ago. Even if GR-MR are denied a two-thirds majority in the parliamentary elections, we are hurtling into a tunnel whose exit could be authoritarian dictatorship of some form. Lanka is fighting a rear-guard action against a complete power grab, and this makes the future precarious.

The GR-MR regime draws sustenance from Sinhala-Buddhist (SB) nativism hence it is no surprise that it is said to be planning to re-vamp or abandon UN Resolution 30/1 and close down the Office on Missing Persons (OMP) – Daily Mirror report. Work on accountability and ascertaining the truth through investigation is not the regime’s cup of tea. It denied disappearance ever occurred so why maintain an outfit like the OMP? The regime will pay compensation to families as in CBK’s days to keep them quiet. The fusion of an authoritarian strategy with nativist mass emotions is a deadly combination. What the parliamentary elections will confirm or disprove is whether the chauvinist surge to the GR camp is an enduring phenomenon or just a transitory flash in the pan. If the former, heaven help Sri Lanka.

Notwithstanding this gloomy prospect one must keep up the fight every step of the way. If the infatuation of the SB-mass with GR-MR is not an obstinate political transformation it will be possible to reverse it to a degree. The first step must be to deny GR-MR a two-thirds majority and an opportunity to amend the Constitution by legitimate means. This will strengthen the hand of the democratic citizenry in resisting attempts to force dictatorial measures by more roundabout means as in the 1930s in Germany.

President Gotabaya is playing it cleverly. The Roman god Janus is depicted looking in two directions. Gota’s pragmatism and penchant for getting things done is winning him plaudits. He seeks to widen his base and is doing so with success. The middle-class is impressed by clearing garbage, cleaning drains, improving roads and surprise visits to government departments to nab errant officers sleeping on the job or absent from duties. It is said productivity is being enhanced and costs are being cut. Limiting the size of the Cabinet and prohibiting ostentatious displays of photographs of politicos is engendering a positive response. The message is: “Give me authority; I will deliver the goods and take you forward”. Authoritarianism attired in achievement is not a message that can be easily resisted. It is a common, if half serious cliché to say: ‘Sri Lanka needs a dictator to clean out the muck and mend the country’. That’s GR’s other market; by other I mean the non-SB nativist sector. Actually the two markets overlap.

Truly we are in uncharted territory; no one, least of all President Gotabaya himself, can predict how things will evolve over the medium of term of about three years. Observe that rampant nepotism in corporate appointments (Gota’s US travel agent; MR’s son’s in-laws) is raising its ugly head again. All in all, I see the following, roughly in order of importance (influence not morality) as critical factors.

1. Sinhala-Buddhist politics: How long lasting the upsurge we witnessed at the end of last year? Will it harden to the bedrock of a lasting ideology spurring nativist authoritarianism?

3. Alternatively, will people in increasing numbers (SB people, the minorities are anyway lost to Gota) take fright that an intolerant, illiberal and nepotistic autocracy is taking shape and buck the trend? Are the feckless UNP, rudderless JVP and the homeless minorities able to work together to achieve any mobilisation at all? The signs don’t look good.

4. Only fourth in importance, in the medium term, is the economy. There are modest prospects for growth if the debt canyon can be bridged. Usually, the third leg of the triumvirate underpinning authoritarianism is populism. But splashing goodies at the masses is not possible without running up more debt – the already promised tax cuts and 100,000 jobs will wreck the budget. So the regime has a problem, it has to talk its way out with its creditors or with the masses.

5. The minorities, Tamils (both variants) and Muslims, won’t matter in political calculations for some time to come. The November melodrama has turned them into sideshows.

6. The big wide world outside (Geneva, New Delhi, Westminster and DC) can, I think, be side-lined by the regime for some time. The Tamil diaspora and the international human-rights movements have by and large been emasculated.

What then is my overall estimate for the medium term? Advantage Gota and authoritarianism for now! But still far from point, set and match. To defeat this a double-fault has to be forced on the regime. First deny it a two-thirds parliamentary majority; second throwback all attempts to amend or subvert the constitution except with tri-partisan endorsement. Tri? Well, Regime, UNP and the Minorities.