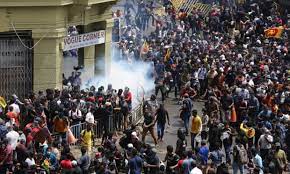 How do we halt and reverse the descent into anarchy? What do we have to do to create the essential foundation of political stability and institutional legitimacy for our economic recovery to begin?

But there are a number of supplementary political steps based on this legal framework that it is the responsibility of the Opposition to deliver, to ensure an orderly, swift, and resilient transition of power.

Before triggering the procedure for the election of the succeeding President in terms of Art 40 of the Constitution and the Presidential Elections (Special Provisions) Act, the Opposition must secure a transitional political agreement among parliamentary parties.

First step of the transitional process is that Parliament elects an MP to succeed as president within the stipulated timeframe. Such MP must pre-agree that he or she will only hold office for the duration of this transition plan.

The successor President may appoint a Caretaker Cabinet of a Prime Minister and no more than four other Ministers to assist him or her in implementing the transition plan.

Within 2 weeks of the formation of the Caretaker Government, the Cabinet must certify that the Twenty First Amendment to the Constitution Bill, the Private Member’s Bill presented by Hon R.M. Ranjith Madduma Bandara MP to the Speaker and Secretary General of Parliament  on 21 April and published in the Gazette on 6 May 2022, is adopted as a Government Bill and is to be passed by a two-thirds majority in Parliament and the people at a referendum in terms of articles 120(b) and 83 of the Constitution.

After publication in the Gazette, the Prime Minister must after 7 days present the Bill to Parliament. Parliament must take up the Bill forthwith, and the debate and vote must be taken within 1 day after suspending the Standing Orders for the normal Government Bill procedure.

The President must then forthwith issue Proclamations to submit the Bill to a referendum, and for the holding of the general election, both to take place on the same day, on a date appointed within 8 to 12 weeks of the Proclamations.

This transitional plan delivers the requirements of clarity, certainty, legality, expeditiousness, transparency, and accountability, and it balances the need for change with the need for stability and order at this critical time.

(Complied from  set of  of tweets by Asanga Welikala @welikalaa)