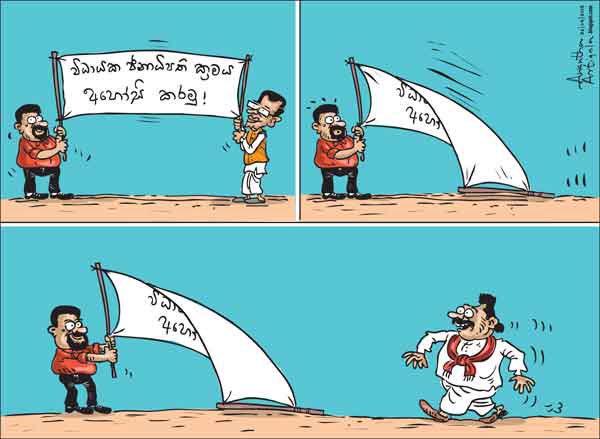 The JVP is proposing a 20th Amendment to the constitution which will centre around the abolition of the executive presidency. This follows on the crisis in governance that culminated in the no-confidence motion in parliament against Prime Minister Ranil Wickremesinghe. The background to this was the open manifestation of a power struggle between President Maithripala Sirisena and Prime Minister Wickremesinghe, which highlighted the problem of having dual centres of executive power. On the one hand, the President who is directly elected by the people enjoys the position of head of state and head of government. On the other hand, the Prime Minister who has the support of the majority in parliament is also vested with executive powers.

The possibility of conflict between the President and prime Minister increases when they are from different political parties, as at present. The previous occasion such a situation arose was during the period 2001 to 2004 when President Chandrika Kumaratunga and Prime Minister Wickremesinghe were compelled to enter into a cohabitation arrangement due to people’s mandates being received by them at two separate elections. On that occasion too, the relationship was never smooth and always conflictual, and culminated in the sudden dismissal of the Wickremesinghe government in 2004 by the President. On this occasion, President Sirisena was prevented from sacking Prime Minister Wickremesinghe due to the 19th Amendment which took away this presidential power.

The merits and demerits of the executive presidential system of government have been debated since its amalgamation with the Westminster system of parliamentary democracy in 1978. The abolition of the executive presidency has been promised at every presidential election since 1982. But on every occasion the winning candidate who had earlier promised to abolish the system has ended up reneging on the promise made and instead utilizing the powers of the presidency to the maximum. They have also sought to further strengthen the position they have enjoyed, such as by the 18th Amendment to the constitution passed during the period of the last president which gave him the opportunity to contest the presidency an unlimited number of times.

At the presidential election of 2015, one of the key promises made was to abolish the presidential system and to revert back to the parliamentary system. It is to the credit of President Sirisena that he made an initial effort to fulfill that promise. But there were powerful forces within the government that held in favour of the presidency, on the grounds that a fragmented polity required a centralizing power, and therefore did not permit its abolition. Behind the opposition to abolishing the presidency was, and remains, the personal desire of many who believe that they might one day ascend to that position. Therefore, President Sirisena did the next best thing and reduced the powers of the presidency. He reinstated the two-term limitation, took away the presidency’s powers of unilateral appointment to key state institutions, and also shared powers of government with the Prime Minister.

At the present time there is a correspondence between the needs of the country and the interests of the three main political leaders in the country. There is a sense of drift in all areas of governance. The dual system of power has failed in general. The only exception is the opening of space for dissent, which has been provided in full measure. However, the utilization of this space by groups such as trade unions and university students and ethnic nationalists, who are opposed to the government, and manipulated by the political opposition, has added to the general lack of direction that prevails in the country’s political and economic life. This has had negative consequences on the country’s development prospects, with Sri Lanka being close to the bottom of South Asian countries in terms of its growth rate.
It is in this context that the JVP is planning to present its proposal to abolish the executive presidency as the 20th Amendment to the Constitution when the new Parliamentary sessions commence on May 8. The chances of success this time around, at getting rid of the executive presidency are better than ever before. President Sirisena, Prime Minister Wickremesinghe and former President Rajapaksa who leads the opposition to the government all have an interest in an alternative to the popularly elected presidency. This correspondence of interests is unlikely to occur again so if the presidential system is to be abolished or changed substantially, this is the best time. The JVP proposal for a 20th Amendment is therefore a response to a need at the present time.

The clearest case of self interest in the abolishing of the executive presidency is that of former President Rajapaksa. The 19th Amendment has blocked anyone who has been President twice from contesting in the hope of a third term. This has meant the exclusion of the former President, who has contested and won two previous presidential elections, from contesting yet again to get to the highest political position. At best he will have to support one of his political allies to become the president, but the experience of President Sirisena and Prime Minister Wickremesinghe in managing their relationship will not be a reassuring one to the former President. Therefore, his best option would be an abolition of the executive presidency which will offer him the opportunity to wield total executive powers as a Prime Minister.
Prime Minister Wickremesinghe too has an interest in seeking to abolish the directly elected executive presidency. This is because it is a position that can most easily be won by charismatic and nationalist politicians who can make emotional and irrational appeals to the hearts and minds of the masses of voters. These are not campaign modes that Prime Minister Wickremesinghe favours. His appeal is to the intelligentsia, which Sri Lanka is only a small minority, though in 2005 he came within a hair’s breadth of winning the presidential election, and was only thwarted by the LTTE-imposed boycott of northern Tamil voters. Prime Minister Wickremesinghe is more likely to build a coalition of political parties, especially the ethnic minority parties, which will secure a parliamentary majority in which he will have the leading place.

President Sirisena too has an interest in finding an alternative to a presidency that is obtained after a popular election. In 2015, he won due to the votes of UNP supporters, but his conduct towards the Prime Minister in the recent past has alienated them and the split in the SLFP will deny him their votes as well.

The best option for the President would be a president who is elected by parliament, as in India. But whereas the presidency in India is mostly symbolic, taking into account the specific conditions in Sri Lanka, the President may be given additional powers. Indications are that President Sirisena and Prime Minister Wickremesinghe are in the process of negotiating with each other about how best to restore their relationship. If that task is accomplished, it will be possible for the executive presidency as it presently exists to be changed substantially if not abolished in its present form.