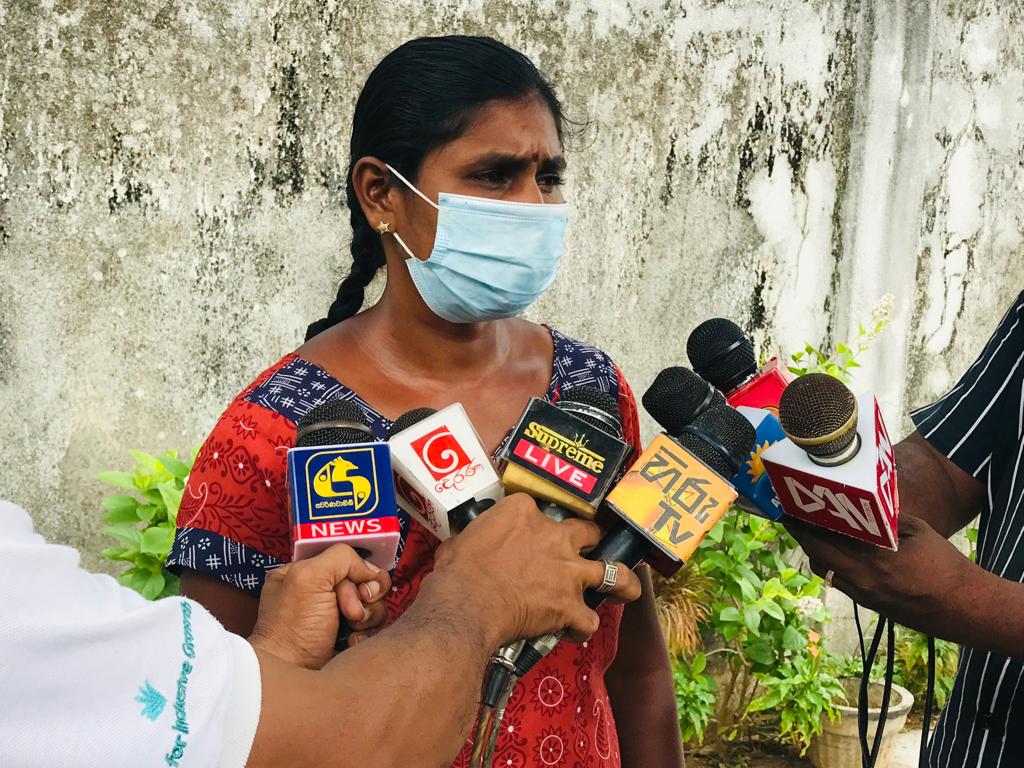 Image: S. Sharmila, wife of abducted ex-cadre told media that he was missing.

Ex-carder Mr. Manokardhas Subas, 40 yrs, holder of NIC No 198132205735, has been abducted by six armed men today in Trincomalee, Eastern Sri-Lanka. Today 28th September 2021 early morning around 5.30 am six armed men in civil dress break into the house of Subas in the address of 340/80, Puthukudiyiruppu, Varodhayanagar, Trincomalee, scolded him in filthy language and forcefully taken him by a van.

“The Sri-Lankan government has failed in promoting the transitional justice and not fulfilled its international human rights commitments. It is obvious that the government is speaking about “Protection and Promotion of Human Rights” merely to compromise with the international community for economic gains.”

When the men were breaking into the house, Suba’s, his wife, three children and his mother were sleeping. Armed men who had abducted Subas spoked Sinhala and colloquial Tamil and when his mother questioned who they were, they responded that they were from the Uppuveli police station in Trincomalee and going to take her son for interrogation.

Mrs. S. Sharmila wife of Subas had gone to the Uppuveli police station to make a complaint regarding the abduction of her husband but police in duty at the station refused to take the complaint and denied that they haven’t sent men to arrest Subas. Without knowing the whereabouts of her husband, she has lodged a complaint at the Trincomalee human rights commission office and spoke to the media as well. 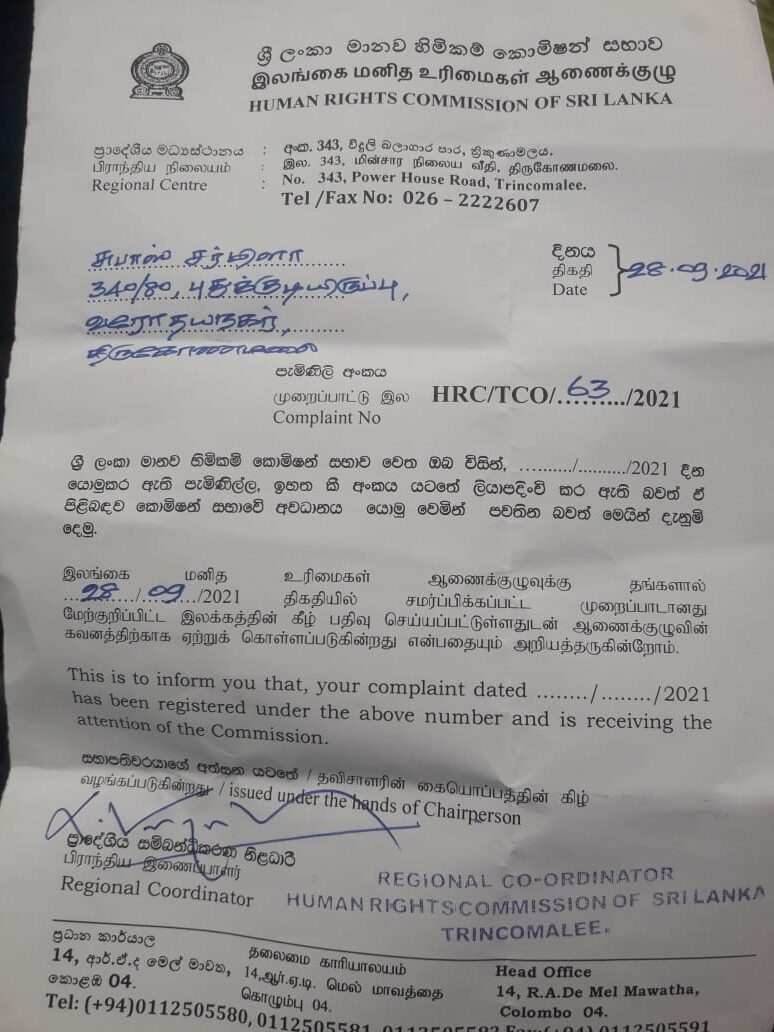 Later she has come to known that Subas was taken by the Colombo Crime Investigation Department (CCID) who came from Colombo, kept him in Trincomalee and going to take her husband to Colombo for further investigation.

The men who abducted Subas, again went to his house for two times today. First, they had gone there with another person and fully searched the house and the yard. Again they went with the same person around 4. 35 pm to Subas’s house. At that time Subas’s 15 years old son was at the house alone. Men pointed the other person to the boy and asked the boy whether that he has known that person and the boy stated that he didn’t. Then the CID men slapped the boy several times on his face. When they were leaving, they threw the personal documents of Subas out of the van shutter which were in the possession of Subas.

During the war Subas and his parental family displaced from Trincomalee to Mullaitivu and while in Mullaitivu, in the last stages of the war he was forcibly recruited to LTTE. When the war ended up in mid May 2009 the entire people who remained in the district were driven to the Manik Farm IDP zone in Vavuniya.

Subas also went to the IDP zone along with his family and there he was arrested by the army and had been detained at the Nelukkulam detention center in Vavuniya for two years and undergone “rehabilitation” and was released in mid-2011.

After the release he arrived to Trincomalee, got married Ms. Sharmila and have three children and running his family by packeting and selling food items in small scale. His wife and mother also work along with him. He has been socialized and lead a harmonious relationship with his community members.

His abduction has terrorized the people in Trincomalee and as well as the entire minority Tamil community in North and East of Sri-Lanka. Especially, the safety and protection of the ex-carders have become a question.

In 2018 December an ex-carder was arrested and imprisoned for months in related to the  murder of two policemen at the Vavunathivu police check point of Batticaloa district and later he was released when the true killer acknowledged the crime after the Easter attacks.  Such incidents explicit, that the ex-carders are vulnerable to become easy targets under suspicion for crimes.

While the families of disappeared persons and communities in North and East Sri-Lanka are being continuously demanding the government to give back their disappeared family members who have been arrested by the state armed entities as well as the prisoners of war and the release of political prisoners and PTA detainees, re arresting and interrogating ex carders, abductions, arbitrary arrests and detentions, threats, torture, brutal attacks against women and children are again surmounting.

Through militarization and continuous community level militarized monitoring and by arbitrary arrests and detention under PTA the government terrorizes and controls the minorities. All these atrocities explicit that the human rights in Sri-Lanka is dramatically shrinking and the failure of reconciliation.

In his speech made at the 76th General Assembly of the United Nations on 22nd September 2021, Sri-Lankan President His Excellency Gotabaya Rajapaksa mentioned that his government would not allow reoccurrence of past violence and they would foster accountability, restorative justice, reconciliation and would treat all citizens equally and ensure the rule of law.

Therefore, we civil society organizations and affected communities in North and East Sri-Lanka openly call upon the United Nations, international community and especially the Government of  India to exercise their  international human rights treaty commitments toward its fellow nations and to emphasis the Sri-Lankan government to stop terrorizing and discriminating the minorities, end militarization in North East Sri-Lanka and to ensure reconciliation, maintain  rule of law and to build a democratic environment for all its people to live peacefully.