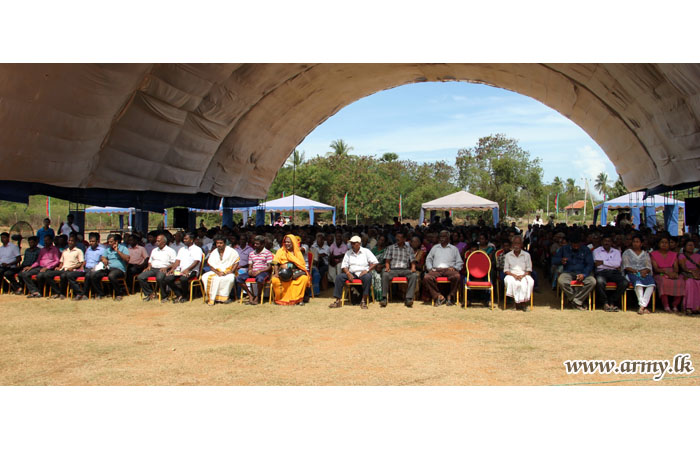 In line with the government’s policy of releasing civilians’ land, hitherto used by Jaffna Security Forces, the Sri Lanka Army without compromising national security interests released a record 683 acres of land in Thelippalei Divisional Secretariat area to 964 legal owners during a ceremony, held this morning (13) in the same location, Thelippalei under the auspices of the Commander of the Army, Lieutenant General Mahesh Senanayake and the District Secretary for Jaffna, Mr Nagalingam Vedanayaham.

The release of those lands continuing for the last couple of months, following an initiative taken by the Army itself, has however not necessitated either the removal or shifting of any security formation operating in the said portion of the land in Thellippalei, Palaly.

Release of lands, organized by the Security Force Headquarters – Jaffna (SFHQ-J) under the guidance of Major General Darshana Hettiarachchi, Commander, Security Forces – Jaffna took place as a New Year bonanza on the eve of the Sinhala & Tamil New Year- 2018.

The gesture, organized jointly by Ministry of National Integration and Reconciliation, Ministry of Prison Reforms, Rehabilitation, Resettlement and Hindu Religious Affairs, District Secretariat for Jaffna and the SFHQ-J was attended by a large gathering of people including the beneficiaries.

Friday’s release of 683 more acres of the Palaly Army camp area, the biggest chunk of land released to the Jaffna public on a single day, adds a historic chapter to the government’s ongoing projects of reconciliation and ethnic harmony.

Commander of the Army formally gave away documents pertaining to the release of lands symbolically to the District Secretary who was present there.

Commander, SF-J, state officials, land recipients and members of the public in the area attended the occasion.