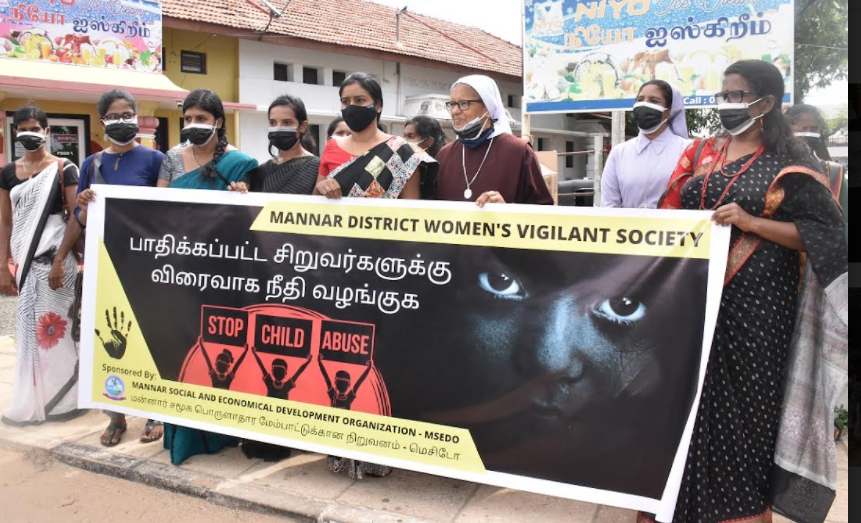 When a child is physically harmed or sexually abused, the ideal response is for Doctors to treat injuries, therapists to counsel the child, law enforcement officers to arrest the offender, and Attorneys to prosecute the offender. This is possible only if the government agencies and organisations involved have an established process in place for collaborating on child abuse cases. But, most importantly, Sri Lanka lacks a national child protection framework.
The topic of child abuse draws the limelight and media attention at the very moment following the death of the underage domestic aide at Former Minister Rishad Bathiudeen’s house. There have been several alarming shortcomings in the investigation into that particular case which people are already aware of. Due to the sensitivity,  seriousness and also political viewpoint, the case is currently making headlines. Yet, we are failing to focus on the root cause/ causes for such incidents to repeat across the country.
Due to the lack of a national child protection network in place, well-meaning stakeholders at every level lack nationally accepted guidelines and a defined hierarchy within which to carry out their tasks. To make matters more challenging, insufficient evidence and data make it harder for policymakers to work on child abuse cases reported on the ground. This article investigates the loopholes in the Sri Lankan process that is supposed to protect children and prevent abuse.
There had been many governments in power as well as many ministers of child and women affairs in power. Nobody has been able to introduce a strong child protection network to speed up and strengthen this multidimensional problem that requires a multidisciplinary team approach in which all professionals are involved for successful intervention.
National Child Protection Authority (NCPA) founded in 1998 is the authorised national body whose role in child abuse cases cannot be overstated. It spans the entire case from the initial call, through the investigation, to the court proceedings.  The NCPA officials along with relevant law enforcement officers are responsible for working together to investigate and determine if a criminal law has been violated; identify and apprehend the offender; file appropriate criminal charges, and provide guidance and support to the affected child and family.
Laws are in place and departments and ministries are established to protect Sri Lankan children. Then, why have we failed to protect our children? A recent Special Audit Report has revealed that the increase of child abuse cases in Sri Lanka is the result of numerous failures on the part of the NCPA. This is the most recent and most precise official document that disclosed the shortcomings of the authority.
No national policy
Even though the Committee on Public Enterprises (CoPE) and the Cabinet of Ministers had issued orders from time to time, the NCPA had not established a formal policy until the National Child Protection Policy, which came into effect in 2009, had been approved by the Cabinet only in October 2019, after the lapse of 10 years.
The formulation of the policy had been delayed because the functional part of it had not been assigned to a responsible officer, directly. The policy had been re-initiated without carrying forward the already existing policy due to officers holding the position of Chairman of the NCPA, changing from time to time. Due to the delay of the policy, the required recommendations for legal, administrative, or other amendments have not been done.

While the unpleasant experiences such as abuse incidents leave marks in children’s minds which may never be healed, the media exposure is found to be causing secondary victimization, stigmatization, and psychological distress for survivors and their families

No national database on child abuse
The preparation and maintenance of a national database on child abuse is a major function under the National Child Protection Authority Act No. 50 of 1998. Though decades have passed subsequent to its enactment, the NCPA had not yet paid attention to formulate a national database.
In 2014, the task of preparing the national database had been assigned to Sri Lanka Telecom. However, the NCPA had taken no further action in that regard. While the situation remained the same, two years later in 2016, the NCPA entered into an agreement with the University of Colombo on a contractual amount of Rs. 1.2 million to advance the data system, but it had not been successful either.
Complaints and cases stuck with no progress
It was observed that Court cases relating to children who had become victims of child abuse have not been completed before the child reaching the age of an adult.
More than 35% of the total number of complaints received by the NCPA were from the four districts namely, Colombo, Gampaha, Kurunegala, and Galle. It was observed that much attention had not been paid to the complaints reported from these districts.
It was not possible to review the progress of the complaints made easily since the NCPA had not recorded the complaints in a way that provides easy access to identify information regarding the complaints. The evidence preparation before court cases being filed is practiced to minimise the secondary victimisation of child victims.
Video technology is sought with regard to this. A total of 461 requests had been received for video evidence from 2017 to 2019, out of which, 130 requests had gone unheeded. The audit reveals that the lack of adequate equipment for video preparation and a dearth of trained officers for holding interviews in the relevant Police Stations are the reasons for the non-compliance of these requests.
Although a report including recommendations of reducing the time spent on cases filed in the High Court, had been submitted to the relevant institutions by the NCPA, there had been no follow-ups to this course. 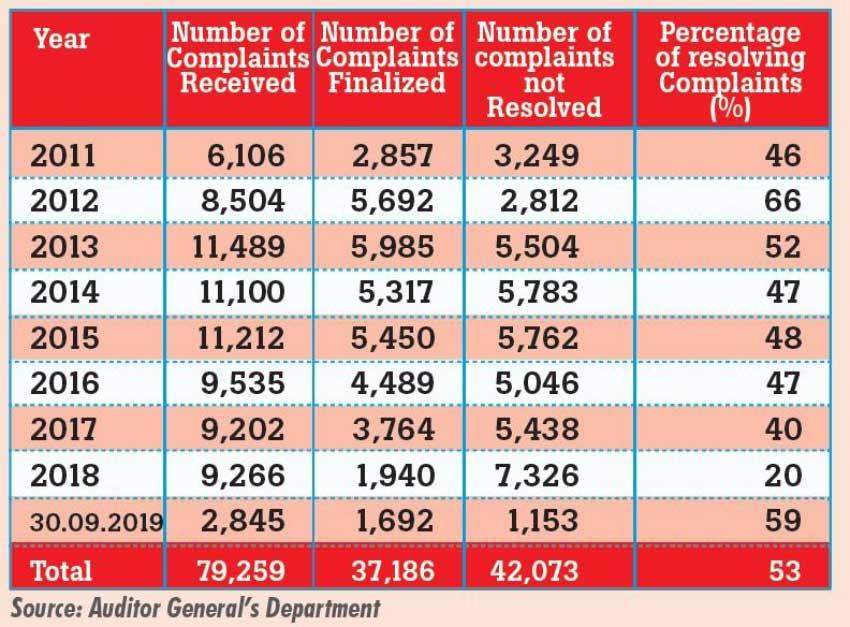 Millions spent on awareness programmes, but to no avail
Programme for schools – “Surekum Pawwa” project (establishing school child protecting committees countrywide)
Period – 2011-2018
Total expenditure – Rs. 29 million
Progress –
Some 3,165 School Child Protection Committees had been established by February 2018. It is 35% out of the total number of schools in the island.
Out of these, only 2,392 Committees had been in operation, which is 23 percent of the total number of schools.
However, the number of complaints regarding children during the period had increased from 6,076  to 9,512.
Programmes targeting civil society
Period – During the last six years
Total expenditure – Rs. 27 million
Progress –
The awareness programme’s title has been changed multiple times but the programme is still in the initial stages.
The expenditure only for the “Jana Pavura” awareness project only for the period of 2018 to October 2019 was Rs. 17 million, and those programmes had been conducted only in two districts.
Many important NCPA positions remain vacant
Regardless of an evident increase of child abuse cases during the last seven years, the higher management of the NCPA had not properly directed the District /Divisional Child Protection /District Psychosocial Officers towards preventing such occurrences. The following important positions at the NCPA had remained vacant for several years, creating questions about the accountability and responsibility of the NCPA in areas that included finance and staff administration. Officials appointed to these positions have resigned from time to time.
Due to the lack of officials in the above-mentioned important positions, resolving public complaints related to child abuse had not been successful, the audit report stated. It was also observed that necessary action had not been taken to retain the officers recruited in the service, by investigating the reasons that led to these officers resigning.
No legal action for 26 years against publishing details of victims
When the names of child victims and other identifying information appear in the media it can exacerbate trauma, complicate recovery, discourage future disclosures and disrupt cooperation with authorities for the children involved.
Penal Code Amendment Act No 22 of 1995 stipulates that a rape victim’s identity must not be revealed except in specific circumstances by the police for the investigation, or with the written authorisation of the victim or next of kin if the victim is dead, a minor or of unsound mind. This written permission is to be submitted only to persons in organisations recognised for this purpose by the state.
Whoever prints or publishes, the name, or any matter which may make known the identity, of any victim of child abuse offences, shall be punished with imprisonment of either description for a term which may extend to two years or a fine or with both.
The worrying part is, whenever there is a child abuse incident that gets reported in the Sri Lanka media, many media institutions not only sensationalize them but also blatantly violate the above-mentioned law by publishing images, full names of the victims, and information that makes known the identity of the victims. Despite the law allows that practice under certain circumstances, has anybody done any studies or investigations whether those special circumstances were taken into consideration when the media institutions, politicians, social activists, or any individual who had disclosed such personal data of child abuse victims?
The” Daily Mirror Eye” spoke to a higher official at the National Child Protection Authority (NCPA), who under the condition of anonymity revealed that the above section of the Penal Code had never been applied or implemented. That means for the past 26 years since the amendment to the Penal Code, no individual has been prosecuted for disclosing the personal data of child abuse victims.
All children have the right to protection. If you suspect that a child is being abused, you should report it to the Police or the local social services. Dial 1929 helpline to counselors or report to thenearest Police station
While the unpleasant experiences such as abuse incidents leave marks in children’s minds which may never be healed, the media exposure is found to be causing secondary victimization, stigmatization, and psychological distress for survivors and their families. When the Daily Mirror inquired the NCPA official, he said the NCPA had not sorted legal action specifically against journalists because the NCPA didn’t want to taint the connection between media and the authority.
When the 2012 Delhi gang rape incident got media attention, the Indian media a pseudonym (Nirbhaya) was used for publications in compliance with Indian law which doesn’t allow the real name of the victim to be released to the media. Delhi police had registered a criminal case against the editor of a Delhi-based tabloid, Mail Today, for disclosing the female victim’s identity, as such disclosure is an offence under section 228(A) of the Indian Penal Code. However, later on, the mother of the victim revealed her name to the world saying ‘my daughter was Jyoti Singh and I am not ashamed to name her’, so if the family is willing, that is a different story.
DM
Share
Facebook
Twitter
WhatsApp
Pinterest
Email