SRI LANKA: A move to punish the judges for judgements they have made 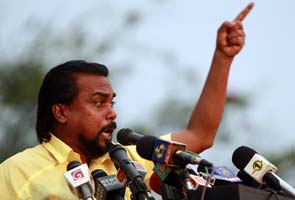 The threat of using parliamentary privileges against the judges of the Supreme Court and the Court of Appeal, who have issued summons and made decisions in cases which have been raised recently relating to the impeachment issue, marks a further step in the attacks against the independence of the judiciary in Sri Lanka.

The government’s attack goes into a very basic questioning of democratic principles, upon which the separation of powers and the independence of the judiciary is based.

The attempt is to treat the judiciary as if it is not a separate branch of the government but rather a subordinate institution to the parliament.

The comparison of judges, who have made some judgments against the impeachment methodology followed by the government, with terrorists is again an indication of the changes in the mentality of the government on the question of the separation of powers and the role of the judiciary. The judiciary’s role in the interpretation of laws and its right to declare legislation or administrative action of the government as being in conflict with the constitution is being compared to terrorism.

The debate that has developed in Sri Lanka is therefore a very fundamental debate relating to what the basic structure of the state in Sri Lanka should be. The government is quite earnestly pursuing claims that the executive acting through the parliament is the basic structure of the government, and that the judiciary is an external entity. The attempt is to turn the judiciary, through force if necessary, into a subordinate of the executive, rather than a separate branch of government.

Naturally, the judiciary (such as in the Supreme Court’s judgment on the 1st of January, which was an interpretation of the constitution made at the request of the Court of Appeal) is asserting the basic principles on which democracy and the rule of law is based.

The government, in trying to assert that executive actions taken through the parliament are alone the state, are undermining the very foundations of the rule of law.

The government is attempting to give a basis to its power without reference to the notion of the supremacy of law. The government’s claim is that it can define its own power structure without any reference to law or, in other words, the government is claiming that what it declares is law, and in making such a declaration it does not have to refer to the existing structure of the legal system as a whole.

What we have in Sri Lanka now is a fundamental crisis of rule of law itself. The implication of the government’s interpretation of its power is that whatever position it takes is the ‘law’ and that in doing so it does not have to make any reference to the existing law.

The implication of the government’s position is that their rule means making pragmatic arrangements in whatever way they wish and whenever they wish, irrespective of total structure defined by law within which the government has to function.

Through the attack on the judiciary, what is really being attacked is the idea of law itself. The government sees law as a series of pragmatic arrangements that do not have to relate to an overall legal structure and legal principles. Thus, the constitutional crisis that exists now is one that the executive has created for itself. It wants to bulldoze its way with the rogue 2/3 majority it has in parliament, irrespective of whatever conflicts it is creating with the overall structure of the legal system. The executive is behaving like a train driver that wants to run on or outside the railroad. That is how it has created these crises.

The government tried to blame the crises they have created for themselves on the judiciary. They cannot comprehend that all that the judiciary is doing is calling attention to the overall framework of the legal structure and pointing to where the government has derailed itself.

All this points to the fact that the total crisis that the government has created for themselves will not go away by the way they deal with the impeachment issue. In fact, the impeachment issue is only a small part of a much bigger and a complex crisis. All the propaganda that is created through the state media, making the Chief Justice, the other judges, lawyers and everyone who is calling for adherence to the rule of law into scapegoats, will in no way take the government outside the complex crisis that they are faced with.

The government’s problem is not the Chief Justice or anyone else. In fact, the executive’s crisis is itself. The end of the “war” has brought this crisis to the surface.

Instead of blaming the Chief Justice and others, the executive must looks itself in the mirror. It will see itself in chaos due to measures it has itself created.

The overall legal structure of Sri Lanka is not something that the executive will be able to get rid of easily. In every move it takes with that purpose, it will get itself far more deeply entangled with deeper problems and deeper conflicts.