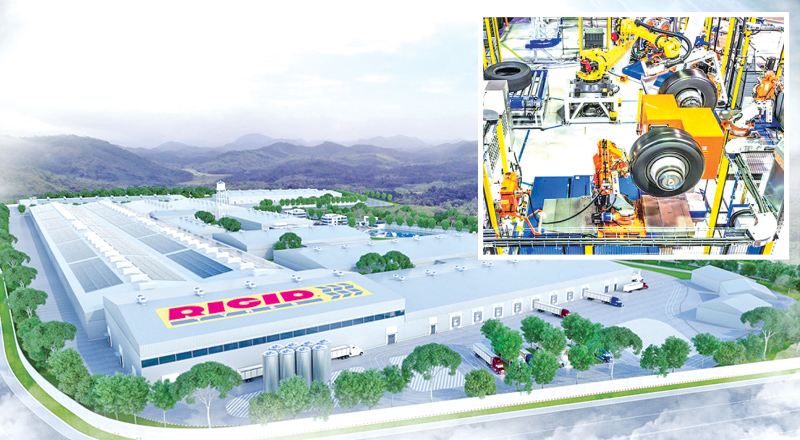 Among other things, it will grant him a 99-year lease on 100 acres of land for an annual rent of just 100 rupees an acre.

For his promised investment of US$75 million (Rs. 11.2 billion), Mr. Lokuwithana’s company is expected to receive an income tax holiday of 12 years after which a preferential rate of 15 percent will be levied, authoritative sources said. The Cabinet Committee on Economic Management (CCEM) has also sanctioned a massive discount on the lease premium owed to the Wagawatte property and is now pushing through other concessions.

While the foundation stone for the Rigid Tyre Corporation (Pvt) Ltd. plant was laid on January 5, the final agreements are yet to be signed, these Cabinet sources said. Since October last year, the Development Strategies Ministry has been mooting a series of generous incentives for Mr. Lokuwithana, including a provision to lease out the sprawling property in Wagawatte at rates calculated by the Government’s Valuation Department.

As such, he will only deposit around Rs 71 million upfront as a lease premium (a one-time payment) on the land and a nominal rent of Rs 10,000 per year or Rs 100 an acre annually. The property is part of the Board of Investment’s (BOI) Wagawatte Industrial Zone (WIZ). The Development Strategies Ministry has secured CCEM permission to have it leased out to Rigid Tyre Corporation for 99 years despite the BOi’s board permitting only 50-year leases.

The BOI charges a premium of US$ 40,000 (Rs, 6 million) anacre for a 50-year lease of WIZ land, papers presented to the Cabinet reveal. Mr. Lokuwithana should, therefore, make a down payment of US$ 4 million or Rs. 600 million for his allotted 100 acres. But he will effectively receive a discount of more than 70 percent on the minimum lease premium when calculated on the basis of a 50-year lease. The loss to the BOI is greater if tabulated on the premise of a 99-year lease.

The papers also state that the annual ground rent for an acre of WIZ land is US$ 3,850 (around Rs. 578,000) an acre. At Rs. 100, the CCEM has approved a discount of 99.98 percent on each acre for Mr. Lokuwithana. Both incentives were granted at the request of the investor, the Cabinet sources said.

The BOI typically advertises available lands. When this was recently done for the Seethawaka Industrial Zone — where the lease premium is gazetted at US$ 60,000 an acre and the annual rent is US$ 4,325 an acre — the agency attracted an offer of US$110,000 as premium and US$ 5,200 as annual rent for an acre. That has now been accepted.

And while the BOI’s powers to grant tax concessions were suspended in April 2016, the Development Strategies Ministry has arranged for waivers on the grounds that the application to manufacture tyres was lodged the previous month, in March. The company will also import project-related capital and construction items free of Customs duty during the four-year implementation period.

Rigid Tyre Corporation proposes to set up an integrated tyre manufacturing facility in Horana and create 3,000 jobs, a statement from the company said. Cabinet sources said the company would export 60 percent of its products and release 40 percent locally. They also pointed out that the BOI usually allowed 10 percent into the domestic market, going up to 20 percent under exceptional circumstances.

The company will use technology from Marangoni of Italy under a partnership agreement signed in September. The 100-acre land will be a “megacity for the tyre industry” with divisions for value addition of rubber, promotional literature states. There will be no joint venture company and the full financial contribution will be from Mr. Lokuwithana, who bought the Ceylon Steel Corporation and is reported to have business interests in Dubai.

It is understood that the BOI’s board of directors had been against granting so many exceptions to a single investor, particularly as it would set a precedent. They were also concerned about giving up 100 of the 150 acres the BOI has in the area to Mr. Lokuwithana, leaving a mere 50 acres to promote among other investors. These objections were ignored.

Mr. Lokuwithana also wants to use part of his 100-acre plot to build houses for employees. This, too, contravenes the prevailing policies of the BOI as no investor is permitted to accommodate staff on land granted by the investment promotion agency. However, moves are now afoot to delist the relevant section of the property — thus placing it outside BOI purview — to facilitate Mr. Lokuwithana’s request. Further incentives are under consideration.

One reason for the delay in signing the final agreement is because 50 out of the 100 acres are still leased out to another company that has requested an alternative property due to issues it is facing on the land.

Mr. Lokuwithana — who owns several businesses in the Middle East — is identified as a holder of offshore accounts in the “Panama Papers” released by the International Consortium of Investigative Journalists. He has often publicly expressed pride at having risen to the heights of affluence from “a modest background from the hinterlands of Medawachchiya”.

He was widely identified as being a Rajapaksa loyalist and conduit, a claim he has not denied. Last year, President Maithripala Sirisena unveiled a life size statue of Goddess Pattini at the Nawagamuwa Purana Sri Maha Paththini Devalaya which was renovated with funding from Mr. Lokuwithana.
Sunday Times