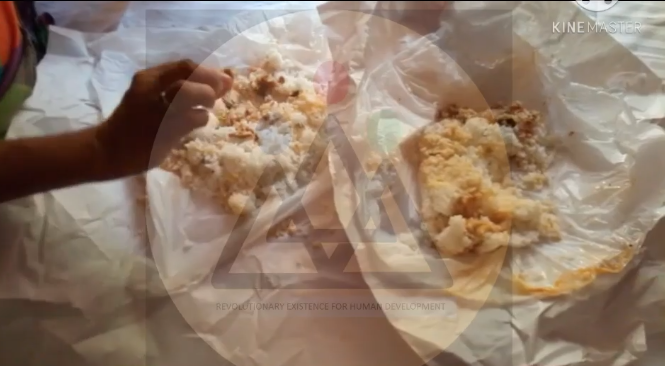 Image: Abducted female workers say that food given to them is not properly cooked and cannot be eaten. (screenshot from the below video)

Fifty-three FTZ workers who were sleeping in their bordering house around 12.30 pm on 12th October 2020 have been taken into quarantine from their boarding house in Avariwatta – Katunayake, despite the Minister appointing a committee to investigate the allegations of Brandix role in the newest Covid 19 cluster in Sri Lanka.

Among the group were 18 men, 35 women, three children, and one pregnant mother. That’s just from one boarding house.

The abductors had stated that they would be taken the workers to a place in Veyangoda, but later they were taken to a building that had not been used for a long time in somewhere in Kalutara.

Those who entered the hostel have asked the workers to come out within ten seconds and get on the bus as soon as possible. Workers were sleeping at that time and they were not allowed to take any of their belongings and were loaded onto the bus. Later some other people were picked up from the Katunayake area until 5 am on the same bus. (These workers are from factories such as Next, Brandix, Smart Shirt  etc.)

After taking them to Kaluthara, they have put men and women into the building separately. As per the information received, facilities and food are not provided properly and the toilets are overflowing.

There is a rumor that there are people who have done PCR and those who are in a positive condition in the same place.

They believe that quarantining workers like this without a proper system and bringing them to such places will quickly increase the likelihood of the virus spreading.

They said “We have no food, no clothes to change, why are they treating us like this ? is it because we are free trade zone workers? and we are humans. not animals ”

Hon. Minister of Labor, as Free Trade Zone Workers, we call upon you and the National Task Force on Covid 19 prevention to do justice to us Free Trade Zone workers in this critical juncture, safeguarding our job security and our dignity as workers.

(From Chandra Devanarayana FB, the language of the post  slightly edited)

Listen to the working women (in Sinhala) who were forcefully taken away by the military and keeping under inhuman conditions.

About 100+ #FTZ workers from #Katunayaka have been rounded-up from hostels on Sun (11) night by the #military & bussed to a makeshift #quarantine facility in Kalutara where no proper #safety precautions have been adhered to & no testing done till now #lka –https://t.co/KgsusvbniX pic.twitter.com/QGewcudhHj