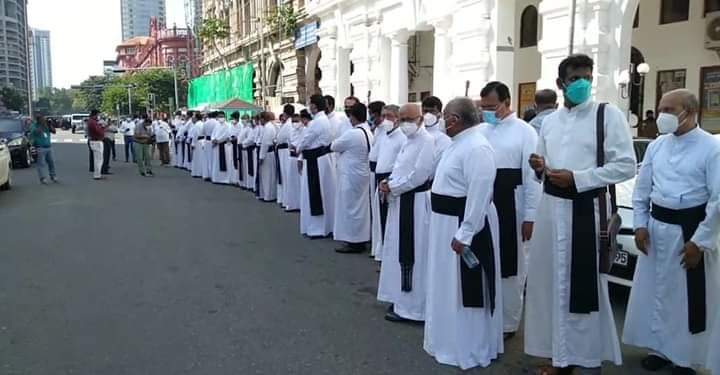 Archbishop of Colombo His Eminence Malcolm Cardinal Ranjith has said that he suspects that the authorities are not implementing the recommendations of the Presidential Commission of Inquiry (PCoI) into the Easter Sunday terror attacks of 21 April 2019 due to some involvement of theirs in the attacks.

Speaking to the media during an event in Wadduwa, he alleged: “The authorities are not even going to implement what the PCoI has recommended. Even though we have been insisting on it, they are not doing it. It makes us suspect that if they are not implementing them, is it because of any involvement of theirs in these attacks.”

The Archbishop further said that it is becoming increasingly clear that there was a larger plan behind the said terror attacks than what is superficially visible on the surface. Claiming that there were several reasons for it, he said the report of the PCoI also contained certain facts.

“The terror attacks claimed 269 lives and left some with paralysis for the rest of their lives. The pain in those hearts cannot be described in words or anything. That can be done only by knowing the truth behind this. Who did this? Why did they do this? These questions need to be answered and our struggle will not stop till then,” Cardinal Ranjith said.

Speaking further, he said: “Although there is no intention of retaliation from anyone, it is necessary to know the truth about these attacks. We are not engaged in politics, but we want to know the truth. If the authorities cannot do it, they should hand it over to someone else who can do it. Those who held higher positions and knew that there would be attacks are now pretending as if they know nothing.”

On Easter Sunday, 21 April 2019, three churches (St. Sebastian’s Church in Katuwapitiya, St. Anthony’s Church in Kochchikade, and Zion Church in Batticaloa) and three luxury hotels in Colombo (Cinnamon Grand Colombo, The Kingsbury Colombo, and Shangri-La Colombo) were targeted in a series of co-ordinated suicide bombings. Later that day, another two bomb explosions took place at a house in Dematagoda and Tropical Inn Lodge in Dehiwala.

A total of 269 people excluding the bombers were killed in the bombings, including about 45 foreign nationals, while at least 500 were injured. All eight of the suicide bombers in the attacks were Sri Lankan citizens associated with the National Thowheeth Jama’ath (NTJ) founded by Zaharan Hashim, who was one of the suicide bombers at Shangri-La Colombo.