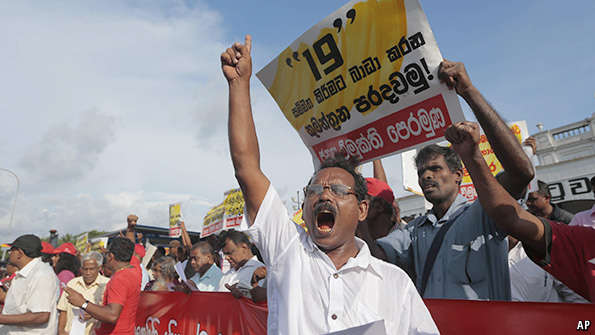 In January 2015, 6.2 million Sri Lankans voted for a new Sri Lanka, giving a mandate for far reaching reforms, even as a rainbow coalition of disparate opposition parties and civil society organizations backed a common candidate for the presidency and Maithripala Sirisena, who had defected from the Rajapaksa administration shortly before and launched a blistering criticism of his erstwhile boss, defeated a deeply entrenched and populist president who sought to leverage his war ending legacy into an unprecedented 18th amendment enabled third term.

The signature achievement of the Sirisena Administration during its second 100 or so days in office, was the 19th amendment to Sri Lanka’s constitution, which essentially reversed the 18th Amendment and reduced the sole discretionary executive powers of the presidency, established independent commissions and strengthened the role of the Constitutional Council in key state appointments. This has, in fact, led to a renewed Sri Lanka, where senior police officers are institutionally independent of politicians now in their professional work and careers, the judiciary has recovered from the low point of the sacking of Chief Justice Shiranie Bandaranaike, a collective decision making on senior state appointments through the Constitutional Council and the establishment of key independent Commissions including the National Human Rights Commission has occurred. This was and is important progress and crucial state reform for Sri Lanka. President Sirisena throughout 2015, 2016 and 2017 praised the 19th Amendment to the Constitution and he was right. That legacy must be protected and nurtured.

In recent times, clearly President Sirisena has done a political volte farce, a complete turnaround from having campaigned against the policies of the Rajapaksa administration to now seeking to hitch his own political fortunes and future to a Rajapaksa return. This of necessity makes him advocate against his own legacy of reforms and change, as he seeks to champion or be associated with a different political agenda and culture going forward. That is the President’s political right, though the wisdom of the move may be doubtful. But the merits of the 2015 reforms, mandated by a majority of Sri Lankan requires a defense, as the politics of the impending year end presidential elections, overshadows the public policy debate.

The Collective of the Constitutional Council

The Constitutional Council embodies that essential principle of key state appointments being independently vetted and approved by a collective leadership. Now in Sri Lanka, these are the appointments to the higher judiciary and the members of the independent commissions, which are by design meant to be independent of the executive arm of government. They are regulatory and oversight in nature, be it the Human Rights Commission, the Police Commission or the Commission to Investigate Allegations of Bribery or Corruption, to name a few.

Sri Lanka needs to make a transition from being a nation governed by populist strongmen (or women) to being governed by institutions, policies and laws and a government that is accountable and a governance that is transparent to the sovereign people of Sri Lanka. Through mechanisms and processes that move beyond periodic elections. It is in furtherance of this objective, that collective decision making on appointments to key judicial and regulatory bodies is being made by the Constitutional Council. The United States, for instance, in which the SLPP front runner for the presidency is a citizen, requires most key state appointments to be confirmed by the US Senate. The adage, “I etat c’est moi” or “I am the state” of King Louis XIV, surely ended with the period of absolute monarchies.

This analysis does not seek to engage inappropriately in the merits or demerits of specific and particular appointments high level appointments. Merely to make the point that it surely boggles the mind and is inconceivable that a collective of ten members of the Constitutional Council, comprising ex officio the Speaker, the Prime Minister and Leader of the Opposition, their nominees and three eminent non-partisan persons, can make a bigger mistake and be allegedly partisan, than a single individual, as would be the case of the executive president. As recent events have indicated, the presidency of Sri Lanka, is hardly removed from the partisan democratic contestation for political power and the criticism of the Constitutional Council is coming from one direction only, that of the political allies of the Rajapaksas. This must also be viewed in the context of the remarkable events of November and December 2018, when the actions of the President and the short lived SLPP / UPFA Government were found to be ultra vires the constitution and relevant laws. It no doubt escapes the extreme Sinhala nationalist members of the JO, that attacking the appointment of Sri Lanka’s superior judiciary is surely counter-productive to insisting and arguing with the international community, for the efficacy of Sri Lanka’s judicial system.

In Defence of the National Human Rights Commission

Sri Lanka has had a long-term problem with the protection and safeguarding of human rights. At one time we were quite high on the list of countries where extra judicial executions took place. Generally, Sri Lankan society was willing to acquiesce in making human rights subservient to the security interests of our long running civil war, believing as Cicero argued in the Roman Senate, that “in the fight of good against evil, the laws are silent”. But post war, we must change. It is a credit to the reforms of post 2015, that the human rights and democratic freedoms in Sri Lanka were strengthened and the attempt to rule in peacetime as in wartime was defeated at the polls.

We cannot, as President Sirisena himself pledged, allow the white van culture, the killing of editors, journalists and ruggerites on the streets of our cities to reoccur again with impunity. The work of independent commissions is a must. A society’s strength is not measured by the extent of its defence of the powerful but in its defense of the weak. As Human Rights Commission Chairman Dr. Deepika Udugama, so eloquently stated in her dignified but sterling defence of the Commission’s excellent work “an independent commission protects the rights of all groups of citizens in the country, this includes even groups of people who have been marginalized and rejected from society, since the fundamental mark of a democratic and civilized society is guaranteeing humanity”.

The governance reforms of the 19th Amendment have demonstrated a resilience and a robustness that strengthened Sri Lankan democracy. It must be defended by the 6.2 million who voted for that change in 2015, even if its champions and architects change course.