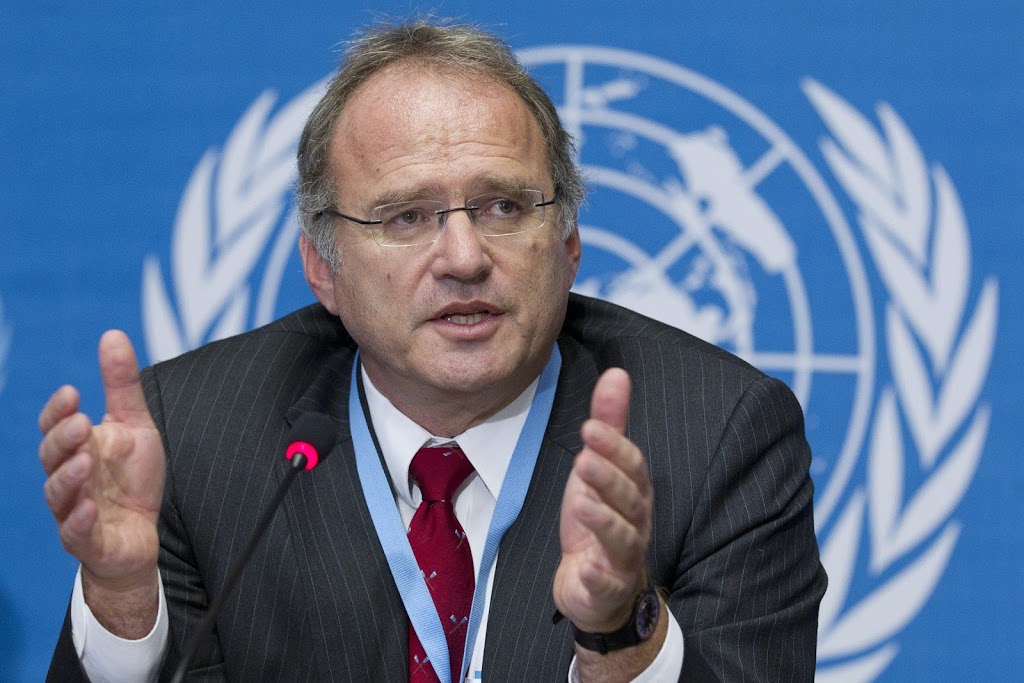 Matthew Russell Lee
UNITED NATIONS,- The UN system’s Special Rapporteur on Extrajudicial, Summary and Arbitrary Executions has inevitably dealt with Sri Lanka for some years, given the mandate.
Inner City Press on October 25 asked Christof Heyns what he has done, to follow up on his predecessor Philip Alston’s work on video footage of executions, and otherwise. Video here, from Minute 32:25.
Alston deemed the executions video authentic, in a session in the UN’s Dag Hammarskjold Auditorium. Heyns on Thursday told Inner City Press that he followed up on new video which came out after he took up the mandate in 2010, and subsequently appeared “in the Channel 4 documentary.”

That was never shown in the UN’s Dag Hammarskjold Auditorium, while the government’s purported rebuttal to it was.

Heyns said, “in the meantime as you know the Secretary General’s panel reported that up to 40,000 people were killed in the last days of the war.” This is a figure that whenever used, push-back and vitriol results. But that’s what Heyns said. Video here, from Minute 37:45.

While there is a so-called Universal Periodic Review coming up at the Human Rights Council in Geneva with a mere 72 seconds per speaker, Heyns looked forward to “next March, 2013” when the “High Commissioner needs to report back. The issue is again on the table.”

Heyns said that this year’s HRC resolution “requests Sri Lanka to engage with special procedures on a road map dealing with reconciliation and dealing with the past.”

Earlier on October 25 Inner City Press asked the Special Rapporteur on Freedom of Religion or Belief Heiner Bielefeldt about Sri Lanka. He said there are “religious elements” to conflicts and spoke of “national mythologies,” seeing “the Other as acting in the interest of a colonial power.” He said the UN should “have witnesses planted in those areas.” He mentioned the UPR, without mentioning it’s only 72 seconds per speaker. Video here, from Minute 32:54.

While it may be unlikely that Bielefeldt will visit Sri Lanka, Heyns said “I am willing to go, the same applies to other mandates as well.” He said “the reconsideration next March is important.” He called Sri Lanka’s “one of the largest reported killings in the world in recent times” that has yet to be “sufficiently dealt with.”

But with Ban Ki-moon’s view of accountability, as not requiring punishment of anyone, what will the UN do? For now, it looks like the report prepared by Charles Petrie as he set sail to Myanmar will be buried. Watch this site
ICP