Somawansa Amarasinghe – Some Recollections from Our Political Journeys B- Lionel Bopage 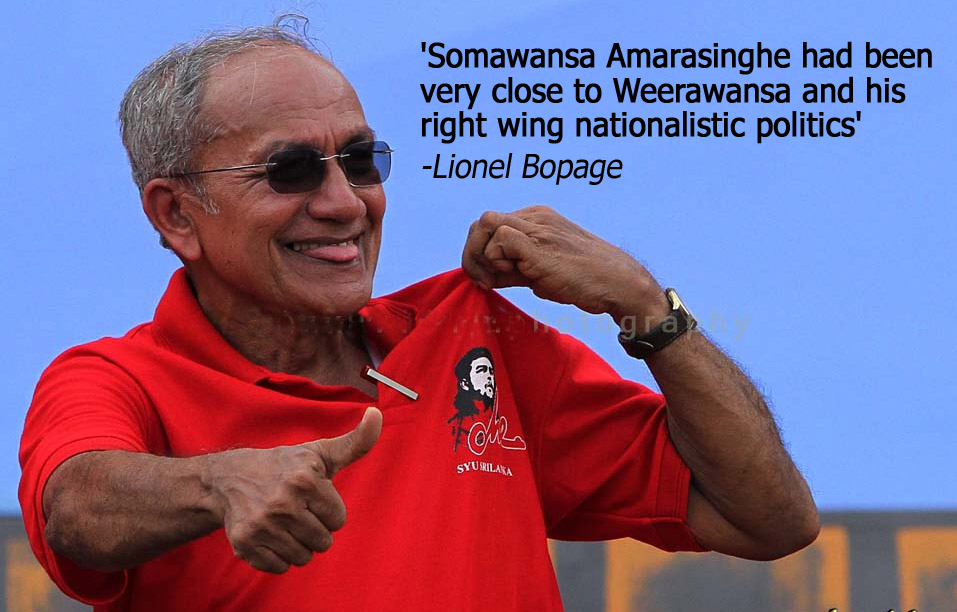 Comrade Somawansa Amarasinghe since joining the JVP in 1969, had been committed at that time to the political line of the JVP. I understand that while he was held in custody in Welikada prison for the April 1971 uprising, he had become estranged from the politics of the JVP. However, when he had been transferred to Jaffna prison later, he had apparently been self-critical about his political deviation. Since then, as a full time activist he had fully committed himself to the JVP politics.

I met comrade Amarasinghe after November 1977, when the then UNP government repealed the Criminal Justice Commissions Act under which most of the leaders of the JVP had been convicted and imprisoned. Since he was released before us, he had taken a leading role in carrying out the political activities of the JVP in the south of the country. We had the opportunity to work together in some JVP political projects, such as the Human Rights Movement and Vimukthi Gee (the Songs of Liberation), during which he played a very active and positive role. From time to time, the Central Committee and the Politburo of the party provided him the opportunities to undertake responsibilities by working in the Socialist Workers Union and also in certain activities related to the party’s international affairs. In the late seventies, he was elected to the JVP Central Committee. When the JVP was proscribed by the UNP government in July 1983, he was the District Secretary in charge of Kalutara.

In our political journeys, we had many political disagreements; he had some strong views: he was supportive of Sinhala nationalism and was biased against other faiths, in particular against Christianity. His pro-Buddhist and pro-Sinhala nationalist political line, in my view was contrary to the progressive political line we were following at the time. We had major disagreements with regard to the national question, particularly since the Presidential Elections held in 1982. Until then, he openly advocated the then JVP policy of accepting the right to self-determination of people on the Lankan national question. He even did so on the open political stage.

In July 1983, 26 members of the JVP including me, late comrade Somaratna Kaluarachchi, the JVP treasurer, comrade Vijitha Ranaweera, Mr Prins Gunasekera, late comrade Satyapala Wannigama, Dr Athula Sumathipala and a host of other professionals were detained under Emergency Regulations on the allegation of leading a pogrom against the Tamil population in the south. This pogrom was actually led by certain politicians of the ruling elite. The JVP was proscribed. Due to legal challenges raised in courts in late 1983, we were released from detention without any charges against us. In February 1984, I handed over my letter of resignation from the position of General Secretary of the JVP & its membership and also from being an elected JVP representative at the Galle District Development Council.

Before activating my resignation in February 1984, a final attempt was made to resolve the prevailing political issues. I still remember comrade Amarasinghe taking me in his motor cycle as a pillion passenger to Mathugama in January 1984, for a scheduled final discussion with comrade Rohana Wijeweera, which never materialised for reasons that are unknown to this day. Since comrade Rohana’s extra-judicial execution in November 1989, comrade Amarasinghe was the only Politburo member to survive the UNP’s extermination campaign against the JVP. According to the information I have, Mr Hendry Wickramasinghe had arranged comrade Amarasinghe to be taken to India by boat. Mr Wickramasinghe had also arranged travel visas for his family members to be flown to Bombay, and personally accompanied them from Bombay to Kerala so that the Amarasinghe family could remain together.

After the1982 presidential election comrade Amarasinghe’s political line including that of many other JVP leaders changed. The last JVP Central Committee meeting I attended at the former JVP MP Vijitha Ranaweera’s place in Vitharandeniya, Tangalle was held solely for the purpose of changing the JVP’s policy on the national question, specifically to repudiate the policy of accepting the right to self-determination. Comrade Amarasinghe was one of the top proponents of this repudiation campaign. It was the decision at the Central Committee that led me to finally resign from the JVP. Since I left the JVP, I had several accidental encounters with comrade Amarasinghe at bus halts or medical centres. Around 1986, I even had a dosa and vadai lunch with him and comrade Jinadasa Kithulagoda at a saiva restaurant in Colpetty!  Nevertheless, on the occasions I had accidental meetings with him, I did not hesitate to point out to him the erroneous and incorrect nature of the JVP’s policy stance on the national question. Yet, as usual, comrade Amarasinghe rejected this and bluntly stated that “It (i.e. the JVP policy) is not going to change”.

During my first visit to Sri Lanka, probably in 1994, I wanted to meet up with the JVP leadership to discuss the then political situation of the country. When I contacted comrade Tilvin Silva, I was informed that they have to contact comrade Amarasinghe in London to get permission for such a discussion. I was waiting for this opportunity, but later came to know that he did not gave permission for this to happen. To his credit, I need to say that I was given that opportunity years later during another visit of mine to the country. I met up with comrade Tilvin Silva and Wimal Weerawansa. Our points of view were so far apart on certain issues including the national question, and we had to agree to disagree. In 2002, when comrade Amarasinghe came back to the country on a permanent basis, I was also visiting the country. I went to listen to his speech at Hyde Park, where he pledged to send 50,000 JVP cadres to the North East battlefront to fight with the government forces, against Tamil militants. Since then, I have seen several interviews he had provided as the leader of the JVP, and I was flabbergasted to see what he had said in some of those interviews. In recent times he resigned from the JVP and formed another political entity that did not gain any discernible political traction.

I have been vehemently critical of comrade Amarasinghe’s extremely nationalist and collaborative politics. Under his leadership, the JVP formed a coalition with the SLFP, thus defeating the very purpose for which the JVP was built in the 1960s, against the betrayal of the left movement by the leaders of the LSSP, the CP and the MEP at the altar of capitalism. Several leading JVP members even accepted ministerial portfolios in the new bourgeois coalition. Comrade Amarasinghe’s right wing politics extended further when in 2005, he decided to support the presidential candidature of the then leader of opposition Mr Mahinda Rajapaksa, despite strong opposition from within the party ranks. I also understand that when Wimal Weerawansa broke away from the JVP wanting to follow an even stronger nationalist line of politics, comrade Amarasinghe had been very close to him and his politics. His recent departure from the JVP leadership appears to confirm his close association with right wing nationalistic politics. It is sad to recall his recent political behaviour had been much more erratic than what it used to be. He joined the ranks of ultra-nationalists of the country, thus betraying the very ideals of social justice and socialism that gave birth to the JVP.

In conclusion, I wish to emphasise that once he was a totally dedicated full time activist of the JVP. He resurrected the JVP that had been decimated by the policy of political and military annihilation of the then UNP government. He had been mainly responsible for re-building and rejuvenating the JVP with the able assistance of many strongly committed and active leaders who had been working on the ground at the grass roots level in the island. In my many meetings with him he was always a convivial political companion and I was sad to hear he had passed away. For his commitment and dedication to the cause of social justice over the years, we pay our fraternal respect to him. I also wish to take this opportunity to convey our sincere condolences to comrade Amarasinghe’s family, relatives and friends.