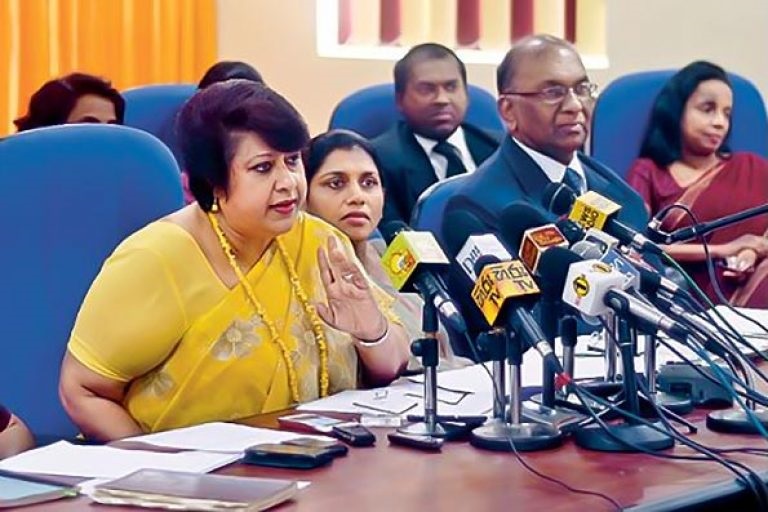 The tape recording of a telephone conversation between former Solicitor General Dilrukshi Dias Wickramasinghe and Avant Garde Chairman Nissanka Senadipathi which resulted in the interdiction of the senior state prosecutor had been edited and doctored, an Administrative Appeals Tribunal (AAT) has established.

Ms. Wickramasinghe was interdicted and sent on compulsory leave by the Public Service Commission (PSC) following the alleged conversation being uploaded on Youtube and broadcast over sections of the media in September, 2019.

The tribunal has directed the PSC to revoke its order and to allow Ms. Wickramasinghe to resume duties in the post of Solicitor General with immediate effect. However, Ms. Wickramasinghe was due to retire last Friday (July 30) on reaching her retirement age.

Three experts reports including a report from the Moratuwa University confirmed that the alleged recording had been substantially edited, doctored and fundamentally distorted.

Meanwhile, Assistant Government Analyst W.G.D.L. Gunathilaka told an inquiry into the allegations against Ms. Wickramasinghe that the impugned tape recording had been subjected to editing at 10 places.

The AAT ruling has noted that Mr Senadipathi himself had admitted in a statement during the preliminary investigation that the purported tape recording had been subjected to editing by him. Though he had given an undertaking to produce an unedited tape, he had failed to do so.

It has been established during the AAT’s inquiry that Ms Wickramasinghe had been trapped into taking a phone call from Mr Senadipathi while at a dinner with former Minister Vajira Abeywardana. Mr Abeywardana had thrust his phone to Ms Wickramasinghe stating that it was Mr. Nissanka Senadipathi on the line and that he wanted to speak to her. Their conversation was related to a question of legal procurement.

The tribunal has stated that the facts presented to it are indicative that Mr. Senadipathi had set a trap and had been waiting in readiness to record any telephone conversation with her to be made use of by him when it was necessary for his purposes.

“It is interesting that neither Vajira Abeywardana’s statement had been recorded nor his telephone had been examined by the experts at the preliminary investigation,” the tribunal has observed.

Preliminary investigations into the appellant had only been concluded in March this year and Ms. Wickramasinghe had been issued a charge sheet on March 23 consisting of four charges.

The AAT has concluded that it appears that the PSC had relied solely on the statement of former Attorney General Dappula de Livera, who had made his first statement based on the distorted audio recording that had been aired on social media and television.

The former Solicitor General was interdicted without payment of salary and allowances up to August 12, 2020. The PSC subsequently ordered that she be paid one half of her salary (excluding allowances) from August 12, 2020 on the basis that preliminary investigations that had started against her had not been concluded and taking into consideration that she had not been paid her salary for 10 months.

The AAT has ruled that these decisions, as well as by its failure to ensure the conclusion of the preliminary investigation within a reasonable time frame and failing to reinstate the appellant subject to holding of a formal disciplinary inquiry, the PSC failed to exercise its discretion in an objective and reasonable manner, which amounts to “an error in law.”

While the AAT had directed the PSC to revoke its order and reinstate Ms Wickramasinghe, allowing her to retire on July 30, 2021, upon reaching her retirement age, this had not been done. On Thursday, the Bar Association of Sri Lanka (BASL) questioned the non-compliance with the AAT order in a letter addressed to PSC Chairman Jagath Balapatabendi and Attorney General Sanjaya Rajaratnam.

Meanwhile, Ms Wickramasinghe has also sent a letter of demand to Mr Senadipathi claiming immediate payment amounting to Rs 2 billion for the loss and damage caused to her through the audio and video clip that had been allegedly published and disseminated by him.