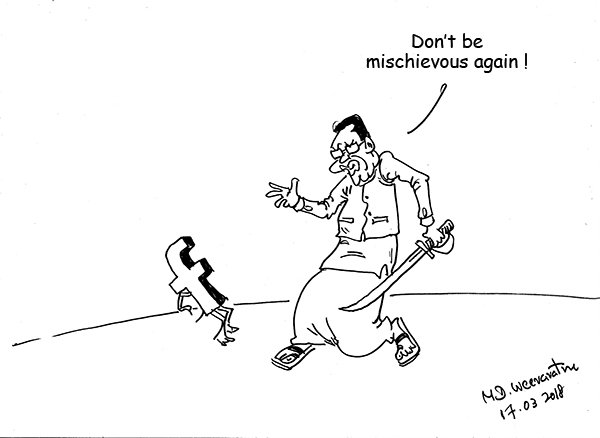 As the violence that affected parts of the Kandy District quietly moves into the history of ethno-religious confrontation in the country, society is faced with a new situation and issue of considerable importance that arose from the violence of recent days. It is the issue of handling Social Media, which brings a whole new area of the freedom of expression and the rights of Internet users into the considerations of politics and government.

Sri Lanka has undergone many years of censorship of the media due to left-wing and trade union protests, ethnic and religious confrontations, and the three-decade long war with the separatist LTTE. The voices that were critical of the use of censorship have been many, and since the lifting of the Emergency by the last government, many months after the defeat of the LTTE, the country has seen a prolonged period of free expression.

Under the present government, there has been a major advance with the passage of legislation for the Right to Information. The current government has certainly opened the paths to media freedom, although there have been concerns about the use of this freedom by sections of the media, and management of news and information by the government itself.

Fear of the Censor

But the things did change with the situation in the Kandy District requiring the government to declare a State of Emergency throughout the island. Although this did not see the usual introduction of regular media censorship and a Competent Authority who would pass a copy for publication, the new developments in the Internet and the involvement of Social Media in a very wide role of social, personal and corporate communication, did bring about the banning of social media networks such as Facebook, WhatsApp and Viber which have presented a new area of media, and involvement of the people in an expanding area of communication.

Many diplomats from western democracies have been strong in their call for these bans to be lifted. The ban has also impacted strongly on local politics, with most political parties, other than those directly associated with the government, calling for the lifting of the ban. Some of the affected networks such as Viber and WhatsApp are already free, and Facebook is due to be free very soon. The protests that have come out, and very loud and effective indeed, have brought to light the importance of an area of the media that was largely unknown to administrators and regulators until the Kandy crisis erupted.

The Government has now declared that laws will soon be introduced to control Social Media. The situation that developed in the Kandy District and the threat of it spreading to other areas too, due to alleged wrong and false reportage and comment in social media networks, certainly points to the need or a good regulatory practice in this regard.

All of this makes the new proposal to impose curbs on social media a matter of considerable interest, with regard to the safeguarding of media freedom, the right to free expression, and the hopes of widening the freedom of expression that the country has seen in the past three years. Measures to genuinely ensure reportage of the truth and fair comment on social media will be most welcome, as well as genuine moves to prevent hate speech on all media, with necessary democratic judicial controls.

Past fears and modern trends

A country that has seen the activity of the Free Media Movement at times when the media was under serious threat, and one with a past (not too far, too) where the killing of and attacks on journalists, and white van dispatches had been the order of the day, it is not surprising that any calls for control of social media could raise many fears and opposition. It is necessary for the government to engage in a wide discussion with the public, media organisations, the journalists on the Internet in this day of blogging, and social media network users and contributors, before such rules and regulations are introduced. The examples of such regulations in the UK and Germany, and any other democracies, as well as the rules in developing countries such as Kenya, require careful study; to ensure that any necessary curbs of social media, in given situations, do not threaten the core principle of freedom of expression in a democracy.

Persons such as the US Ambassador in Colombo who has been very vocal in calling for removal of the ban on social media networks, should not forget or ignore the problem that social media has allegedly caused in the US, seen in allegations of Russian interference in the last Presidential election which brought Donald Trump to the White House in 2016. Congressional inquiries have shown that Facebook, Google, and other organisations had to deal with several millions of what is seen as ‘fake news’ or communications with special or misleading interest, that were planted on those sites. Facebook, Google, and other institutions have announced their intent to prevent such misuse of their networks. True the US did not impose any ban on social media networks, but it did not have to face a situation of violence, and only election propaganda, which may have benefited the current president (whose attitude to the Third World is highly questionable), and helped defeat the candidate who received the wider majority votes, and was no friend of Sri Lanka. The situation in Sri Lanka is certainly different. We can learn from the US records on Freedom of Expression and the First Amendment to its Constitution. But we also need to look at our own problems, from the point of view of a society that has different thinking on gun ownership and control. Democracies can and will differ, and it is best to encourage such differences, without unreal punditry.