Smiling Mahinda:Is Sri Lanka then well on the way to becoming a southern Teesta? 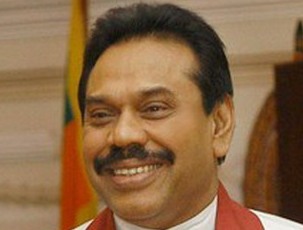 Neena Gopal
The visit by Sri Lankan President Mahinda Rajapakse to Sanchi this coming week when he inaugurates an international Buddhist university and holds talks with Indian Prime Minister Manmohan Singh in New Delhi has already set off angry protests in Tamil Nadu. But the question is — is this going to be the only test faced by the increasingly straitened Indo-Sri Lanka ties?
Clearly, while the recent unfortunate attack on ethnic Lankan Tamil pilgrims to the Velankani shrine was a misfire of sorts, with protesters not realising that the Sri Lankans they had attacked were not Sinhalas but Tamil Christians, more orchestrated attacks can be expected this week in the run-up to the visit, upping the embarrassment quotient.

The first self-immolation has already taken place in Salem on Monday, and rabidly anti-Lankan Opposition politician Vaiko’s Marumalarchi DMK has held out a threat of black-flag demonstrations when the Sri Lankan leader arrives in Madhya Pradesh.

In weeks past, the training of Sri Lankan armed forces personnel at Tambaram airbase has seen the Tamil Nadu Chief Minister protest strongly.

In fact, this recent move against the Sri Lankan government by the AIADMK-run state government, the Opposition DMK and Vaiko’s group, with each party attempting to outdo the other in trying to be more anti-Sri Lankan than the other is in keeping with a worrying trend India-wide that sees the politics of state and region impinging on, and in many ways, overwriting and influencing India’s foreign policy.

The issue of Lankan Tamils will be a test of how far India is willing to push for their welfare given the ruling Congress’ belief that its hands are tied, and abandoning the Tamils is as good as handing over a loaded electoral weapon to domestic political opponents.

That said, in a country with which our people-to-people links have held in the face of the divisive and hugely emotional pull exerted by the now defunct Liberation Tigers for Tamil Eelam (LTTE), hunted down and annihilated three years ago, Mr Rajapakse’s visit serves to highlight the monumental differences that now go beyond the LTTE and the fate of the Tamils in the north of that country, to encompass the strategic imperative that drives India to keep Colombo within its larger sphere of influence in the face of avid cash-rich suitors like China and less so, Pakistan.

The smaller irritant, as in the plight of Indian fishermen, who sail across the Palk Straits and fall afoul of the trigger-happy Sri Lankan Navy, has created its own ripples in the relationship. Despite platitudinous hand-wringing, it is no closer to a resolution.

Neither is the issue of the repatriation and resettlement of hundreds and thousands of Tamil refugees who continue to live on in refugee camps in the southern state since the Tigers began their war of attrition in 1983. The recent “capture” near the west coast port of Karwar of a group of refugees who planned to smuggle themselves on to a boat that would have taken them to Christmas Island in the Pacific underlines their plight — they remain stateless, without a future, unwelcome in their homeland. And that while the brightest and the best of the Tamils have long fled Sri Lanka to the west where they have subsumed their LTTE sympathies and gone on to rebuild their lives, there are others like them trapped in India — whom many believe have turned to crime and drugs and face certain arrest on their return — who remain in limbo. There’s no going back.

Behind the bonhomie, Mr Rajapakse’s government has danced around the issue of resettlement skillfully, clearly unwilling to allow the LTTE strongholds to be resettled to the satisfaction of the defeated ethnic minority, many of whom harbour sympathies for their former masters.

Of the Tamils who hail from Tiger-held towns like Jaffna and Kilinochchi and returned from the west to reclaim what was theirs, many found to their shock, that their homes and property, farmlands that the LTTE had turned into a granary of sorts, had been taken over by the government.

The same is true of the east in Batticalao where some of the bloodiest battles were fought between the government and the Tigers and where, apart from the scorched earth policy that laid waste to vast swathes of territory and made settled areas uninhabitable, Lankan Army checkpoints now reportedly prey on Tamils.

India’s external affairs minister S.M. Krishna’s visit in January this year to Sri Lanka had raised hopes that New Delhi’s long-standing demand for an equitable devolution of power to Tamil-dominated provinces in the north and east would be met. Mr Rajapakse had promised as much, but whether by accident, collusion or design, the foot-dragging has been accompanied by the artful resettlement of other communities in these areas that ensure it no longer can qualify for the moniker Tamil-dominated.

By bringing back Muslims, who had fled in the face of LTTE threats through the 26-year separatist insurgency, as well as more Sinhalese-speaking Lankans, the Rajapakse government ensured that when the promised local body elections took place, the results would be more pro-government.

In effect, Mr Krishna’s call for “a genuine political reconciliation” fell on deaf ears, with the only credible Tamil party, the Tamil National Alliance, unable to counter Mr Rajapakse. Indeed within Sri Lanka, India pressing for the 13th Amendment to be put into effect which would devolve more powers to the Tamil-dominated provinces is seen as rank interference by a bigger neighbour.

Sri Lankan government spokesperson and minister of information Rambuka Keheliya went so far as to contradict Mr Krishna, saying the amendment could not be implemented, over serious concerns in granting police and land powers to a Tamil provincial government.

In effect, Mr Rajapakse may pander to a neighbour that he cannot afford to alienate by offering crumbs in the form of a railway project that in effect will see India get only a part of the project. China, which has a major stake in a key port project, gets the lion’s share.

That India voted at the United Nations in Geneva for an international inquiry into war crimes committed by Sri Lankan military forces when feared LTTE leader Vellupillai Prabhakaran and hundreds and thousands of non-combatants, including women and children, were mowed down in cold blood, has not been forgotten by the man sitting in Temple Trees.

Is Sri Lanka then well on the way to becoming a southern Teesta?
DC