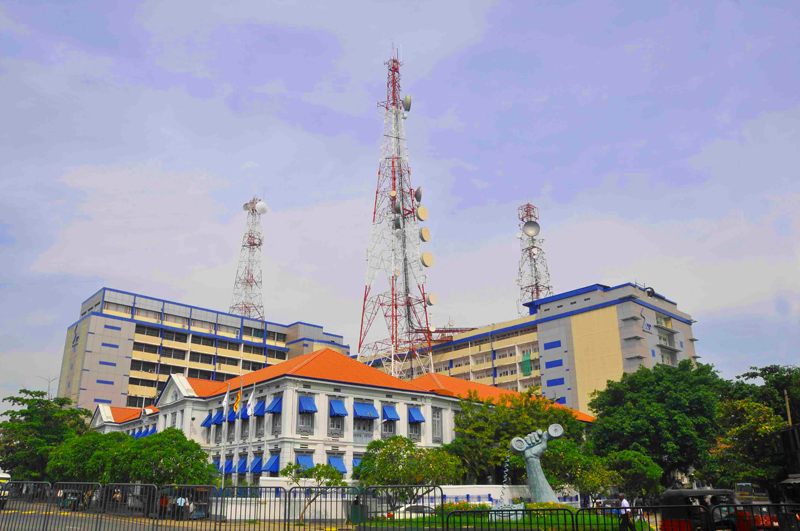 The media reports that the Sri Lanka Telecom (SLT) is going to give their advertising campaigns to ‘Media Factory’ have raised concern among anti-corruption groups. The reports say that the SLT is planning to hand over its entire advertising campaign over to Media Factory. It has now become an issue as to how a private firm can have such a monopoly over a government institution. Moreover, it is important note here that Media Factory is reported to have handled the advertisement campaign of former President MP Mahinda Rajapaksa’s 2015 presidential election campaign as well.

Several media reports have revealed that top officials of SLT and its affiliate Mobitel are attempting to handover the advertising management of the two institutions to an agency owned by the Rajapaksa family. According to the reports, tenders have already been called, but SLT CEO Dileepa Wijesundara and Mobitel COO Nalin Perera, a close relative of subject minister Harin Fernando, are said to be trying to hand over the deal to Media Factory.

JVP leader Anura Kumara Dissanayake has stated recently that this agency is belonged to Yoshitha Rajapaksa.

It was Media Factory which had given Mahinda Rajapaksa’s last presidential election campaign commercials to ITN, but payments have not been made so far for the campaign.

The presidential commission investigating this scam should question Media Factory and the ITN, not Mahinda Rajapaksa who had ‘acted’ in those advertisements, said Dissanayake.

The JVP leader has called for an investigation to reveal whether Media Factory has received commissions when the UPFA got the campaign advertisements published.

However, in response to these allegations the Media Factory has issued the following statement to a website.

In reply to the article posted on July 21 on your website under the title “Attempt to give Advertising to the Rajapaksas”, we would like to put the record straight on the malicious and disillusioned comments made in respect to Media Factory. The author who creatively and with some obvious fear for Media Factory fails to mention that Media Factory was also the preferred media agency by the current Prime Minister, the Honorable Ranil Wickremesinghe during his election campaign of 2015. Even the most illiterate person would understand this would not be possible if we were a so called Rajapaksa owned agency, nor would it be allowed.

We remain a politically neutral agency though some would like to taint us otherwise for their own benefit and inability to match Media Factory’s service and intellectual levels. We are predominantly a private sector based agency and on private sector business alone are amongst the largest agencies in the island. The claims of the author and the need to subscribe to such unscrupulous behavior of fear mongering is an obvious attempt to benefit by removing Media Factory from the equation of the recent pitch. On the claim of ITN outstanding the author again attempts to mislead or remains ignorant to the fact Media Factory has been cleared of any wrongdoings and the letters to this effect have been dispatched to relevant authorities. We are innocent of all accusations made and whilst thankful to the editor for allowing us to reply, are saddened they did not bother to verify the claims previously made. The whole idea of Yaha Palanaya championed by his Excellency the President and Honorable Prime Minister is about building a just society and system that rewards talent and puts the best resources to serve the country.

We have no knowledge on the proceeding of the tender process, but if the tender board evaluation shows us as the best partner for SLT Mobitel, What is the problem? This is an absolute victory for Yaha Palanaya and all that it hopes to achieve.

However, we reiterate with responsibility that SLT CEO Dileepa Wijesundara and Mobitel COO Nalin Perera are trying to hand over advertising management of the two institutions to Media Factory. As far as we know, this advertising agency had toiled hard in the advertising campaign of the former president during the presidential election. Reports have further revealed that the Media Factory is related to an owner of a leading media channel in the country, who had also generously contributed to the former President’s election campaign.

Another interesting fact is that this is not the first time Media Factory has been handling SLT’s advertising campaign. Even during the previous government, it had been actively engaged in SLT’s promotion drive.

Since political influence is the main reason behind all monopolies, we asked several Joint Opposition MPs such as Dullas Alahapperuma and Prasanna Ranatunga about this issue. They denied any knowledge of such a move. Speaking regarding of the matter, the Minister of Social Welfare S. B. Dissanayake, who was also a senior member of the previous administration, said that even though he would not believe any foul play had happened in the contract, it has to be looked into if there are allegations.

Unlike never before, the Opposition is now holding higher ground in COPE. Hence we asked JVP parliamentarian Dr. Nalinda Jayatissa about his party’s opinion on the matter. According to him, most of these contracts are affiliated with political deals. Expressing his views further, the JVP MP said, the Rajapaksa family has now lost some of the privileges and commissions they enjoyed while they were in power. Now Yoshitha is not getting anything. Namal is not getting a commission from Krish deals. May be that is why Yoshitha is going to the CID in a three wheeler these days. Maybe that is why those who toured around the country in helicopters are now coming to Colombo from Kandy on foot. May be Minister Harin Fernando has given away the advertisement contract of the SLT to Yoshitha out of sympathy to the Rajapakasha Family. It is now evident to people how those who had previously accused the Rajapaksas are now engaging in deals with the same culprits without investigating the charges that have been raised against them. There is a clear deal between the UNP leadership and the Rajapaksa family. That is the contract to split the SLFP. In return, they are being offered these lucrative deals.”

Responding to these allegations, SLT Chairman Kumarasinghe Sirisena said that there is no space for corruption. “I too learned about this from media reports. The said advertising agency was removed from the contract a long time ago. There is no opportunity for it to assume the contract once again. We have terminated the agreements made in May 2015 in October last year. SLT has not yet decided to go for a new project,” he said.

Has the controversial “Media Factory” been able to secure a deal with the present government? We asked from the minister of Telecommunications and Digital Infrastructure Harin Fernando as he is the responsible person of the government in this issue. However, refuting these allegations, the Minister said that the tender has not yet been finalized. Claiming that the Rajapaksa family has no relationship with the Media Factory, the minister said that it belongs to an owner of a leading media channel in the country. He further assured that the tender would be processed in a fair manner to everyone.

There is no need to find out who owns what. What is needed is sticking to the Yahapalana policies that were much “Advertised” by the present government. The Sunday Leader is keeping close watch on what is going to happen next.