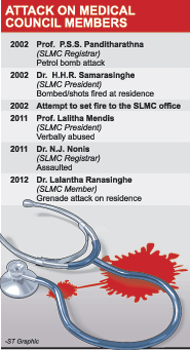 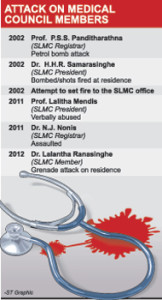 The powerful Sri Lanka Medical Council (SLMC), following a grenade-attack on the home of a respected senior surgeon-cum-SLMC member, has called an emergency meeting tomorrow to decide on a course of action, the Sunday Times reliably learns.

This came amidst an assurance by Defence Secretary Gotabaya Rajapaksa that SLMC members under threat would be provided protection and the medical fraternity reacted with shock and horror after a hand-grenade was lobbed at the Dehiwela home of Consultant Surgeon, Dr. Lalantha Ranasinghe attached to the Colombo National Hospital, on Thursday (August 16) morning.

While police investigations intensified after the Government took serious note of the incident, many were of the view that the threat was to silence Dr. Ranasinghe as he has boldly voiced strong views with regard to certain issues ailing the medical system in Sri Lanka. One of these issues concerns private medical education in the aftermath of the developments surrounding the controversial private medical college at Malabe, it is learnt.

The 23-member SLMC plays a major role as a regulator of medical education. According to his colleagues, Dr. Ranasinghe has not only spoken against but also been part of decisions made against the Malabe private medical faculty. He has also been very vocal about the influx of substandard Indian doctors to Sri Lanka, while taking a strong stand against wrongdoing at institutional level.

On Friday, the Sri Lanka Medical Association (SLMA) and SLMC’s Immediate Past President, Prof. Lalitha Mendis, protested vehemently over the grenade attack, in statements to the media.In a strongly-worded letter titled ‘Enough is enough’, Prof. Mendis, pointed out that this cowardly act is one of many that SLMC members have been subjected to.

She noted that Dr. Ranasinghe served on the Medical Council during her entire tenure as President, stressing that “he is forthright, does not mince his words and speaks on matters of principle. He has done so on many issues facing the Medical Council at present.”

In relation to Thursday’s incident, luckily for Dr. Ranasinghe and his family, although the pin had been pulled out, the hand-grenade had not exploded. Spotted at around 8.30 in the morning, after which several phone calls had been made, it was defused only around 2.30 in the afternoon.

Calling on the authorities to take measures to identify the culprits and bring them before the courts of law, SLMA President Prof. Vajira H.W. Dissanayake added “the SLMA also notes with great sadness that none of the culprits behind such attacks on members and officials of the SLMC over the past few years have been apprehended and punished so far.”

In her letter, Prof Mendis said, “In the course of performing its (SLMC) duties, decisions have to be made and opinions expressed which may be unpalatable to some individuals and institutions. Here lies the problem that in performing their duties by the public, some members of the Medical Council have had to face acts of intimidation.”

“I myself as President of the Medical Council was verbally abused on various occasions including over the radio,” she states, adding “therefore, the grenade attack on Dr. Ranasinghe’s residence is just another in a series of intimidatory acts by vested interests who resent having to conform to standards and who have reckless disregard for the safety of the public”.

Does the public of this country want its health and safety protected by the Medical Council, asks Prof. Mendis, urging, “If so I hope they will with one voice rise and say ‘Enough is enough’.”

No arrests made
Six people have been questioned following the statement made by Consultant Surgeon Dr. Lalantha Ranasinghe to the Criminal Investigation Department (CID), the Sunday Times learns. No suspects have been arrested yet in connection with the grenade attack, CID sources added.

Gotabaya orders probe
Defence Secretary Gotabaya Rajapaksa has promised a top-level inquiry into the grenade incident and asked for a detailed complaint with regard to this attack as well as all attacks against the SLMC, the Government Medical Officers’ Association (GMOA) President Dr. Anuruddha Padeniya told the Sunday Times.

The Defence Secretary requested that if there are any suspicions as to who may be carrying out these attacks, those too should be mentioned, Dr. Padeniya said, explaining that the complaint has to be sent to the Defence Secretary himself, with a copy to the IGP N.K. Illangakoon.

It was during the meeting that the GMOA members held with police top brass on Friday that they were linked with both the Defence Secretary and the IGP through the phone as both were out of Colombo. The meeting at Police Headquarters on Friday had been with Western Province Senior DIG (Administration) Gamini Navaratne and other officials.

While assuring a high-level inquiry to trace the culprits, the Defence Secretary also promised security to all SLMC members, Dr. Padeniya said, adding that security would include police protection and mobile patrols.
Recalling the series of attacks against the SLMC and its members, the GMOA President said that in 2002, when there were moves to set up a private medical college at Piliyandala, the home of then SLMC President Dr. H.H.R. Samarasinghe was bombed while then SLMC Registrar Prof. P.S.S. Panditharatne’s home was fired at.

There were also attempts to burn the SLMC office.In 2011, current Registrar Dr. N.J. Nonis was attacked, Dr. Padeniya said, pointing out that the GMOA also brought to the notice of the Defence Secretary the issues with regard to the Malabe Private Medical Faculty including the fine it had to pay to the Urban Development Authority (UDA), the head of which is Mr. Rajapaksa.