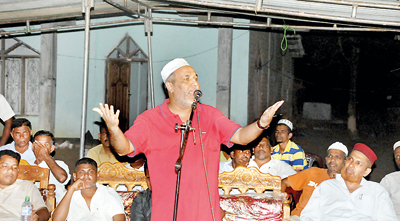 It was deliberate deception and calculated betrayal by the Sri Lanka Muslim Congress.�This is how most Muslims describe the SLMC’s decision to join the very party – in this instance the ruling United Peoples Front Alliance (UPFA) — which it severely criticised to win votes and deceive people during the recent Eastern Provincial Council elections.
The Muslims were suspicious of the SLMC when it criticised the government, while being part of it, in view of its past record of letting down the community.
As a result most Muslims were indifferent to recent provincial council elections. They only voted in response to appeals by mosques in the hope that this time the SLMC would honour its promises.

However Muslims were once again deceived when the SLMC joined the Government without seeking any assurance to solve some of the community’s burning issues. This is nothing but shamming by the SLMC to harvest votes. The Muslims are not against joining the government. As a minority community the Muslims need to work hand in hand with the Government. However, they wanted to do so ensuring their rights and dignity. Sidelined by the Government, the Muslim community has been facing numerous serious issues.

To cite few examples more than 120,000 or so Muslims were driven out mercilessly within hours by the LTTE in October 1990. Most of them continue to languish in refugee camps in appalling conditions in and around Puttalam. They expected to return to their lands after the defeat of the LTTE. However, as pointed out by Minister Rishard Bathiudeen, the Government remains indifferent to the pathetic plight of these victims. Declared as old IDPs and ignored by all they were allowed to rot.

In the East, the Muslims claim that their lands were acquired under various pretexts and the latest being the acquisition of Karumalai village in Mutur after evicting 105 families without any notice. There is uncertainty in Colombo, too, following the forceful eviction of Muslims from Kompannaveediya.

Instead of relief there has been a steady rise of chauvinism and Sinhalisation since the defeat of LTTE in May 2009. This includes organised campaign, perhaps sponsored by external forces, demonising Muslims as plotting to turn this island into a Muslim country. The aim of this ridiculous and vicious campaign is to poison the minds of mainstream Sinhalese perhaps to create an anti-Muslim pogrom.

As part of this campaign, in an extremely dangerous move, a handful of Buddhist monks who are supposed to preach Lord Buddha’s message of peace and harmony, have been used to attack mosques inciting Sinhalese against Muslims. These activities intensified since the arrival of Israelis who remain sworn enemies of Islam and Muslims worldwide.

The question asked by Muslims in general is why didn’t the SLMC raise these issues before joining the Government? Instead, it simply sold out the community in such demeaning manner that Tamil National Alliance (TNA) Leader R. Sampanthan accused the SLMC of betraying the Muslims for positions and selfish considerations by going against the mandate given.

Since the formation of the UPFA more than seven years ago SLMC parliamentarians struck deals and joined the Government individually and collectively. The consensus is that in doing so they abandoned the interest of the community which will never forgive the SLMC for its support to the 18th amendment to the constitution.

The Muslim community was fed up with the SLMC in view of the allegations of corruption, opportunism, greed for positions and power and factional fighting, making the community a laughing stock. It was under such circumstances came the Eastern Provincial Council elections. From the time the election was announced all what the SLMC spoke was about positions and not a word about Muslim issues.

Dealing with the circumstance which brought the SLMC into being, it is worthy to note that in the mid-1980s, the Muslim community was sidelined and remained frustrated. It was around this time President J.R.Jayewardene arrogantly dismissed the Muslims stating that they could leave the government if they wished to when they opposed his move to bring in the Israelis here.

Thus the political conditions were extremely conducive then to establish a separate party for Muslims.
However, all five Muslim parliamentarians from the East, A.R.M.Mansoor,Fareed Uduma Lebbe, M.E.H Mahroof, M.A.Abdul Majeed and Dr. Fareed Meera Lebbe opposed tooth and nail the formation of SLMC stating that the interest of Muslims in the North and East differ from those of the Muslims in the rest of the country. They, together with almost every Muslim politician from the south, warned that such a party could divide communities and isolate the Muslims. These five parliamentarians refused to participate in the Indian-imposed provincial council elections.

However, the then Indian High Commissioner J.N. Dixit, self-declared Indian viceroy in Colombo, wanted Muslim participation to hoodwink the world. Dixit who openly told A. R.M .Mansoor that “India is here to serve the Tamils and not the Muslims” brought pressure on the government and got the SLMC registered as a political party, although the Elections Commissioner initially refused to do so on the grounds that it was a religious-based party. Dixit, according to many, also financed the SLMC which used the Indian Peace Keeping force, IKPF, office as its office during the first provincial council elections.

The SLMC, the product of communal politics of the two major communities and opportunistic Muslim politicians, came with the slogan of Islam, Sharia and unity. Islam and Sharia disappeared at birth. Today the party is split into more than half dozen factions.

The enmity within those who came to bring unity is such that they attack even opponent’s Iftar functions.
Within a few years after its establishment, disillusioned people started distancing themselves from the party which they helped establish as they were quick to realise that the party was a one man show to promote personal agendas far away from Islam and serving Muslims.

Today, the SLMC has become a shameful liability on the community. The reality is that racist politics of mainstream parties and religion based politics of the so called SLMC has brought the country and the Muslim community where we are today.

Despite three decades of killings and destruction the inevitable reality is that the Muslims in the North and East had the Hobson ‘choice of living with Tamils while the Muslims in the rest of the country had to live with others. Of course, racists, be they politicians or laymen, will remain active till the end of the world. However it is time that the Muslim community turns to mainstream parties to ensure a better future for all.