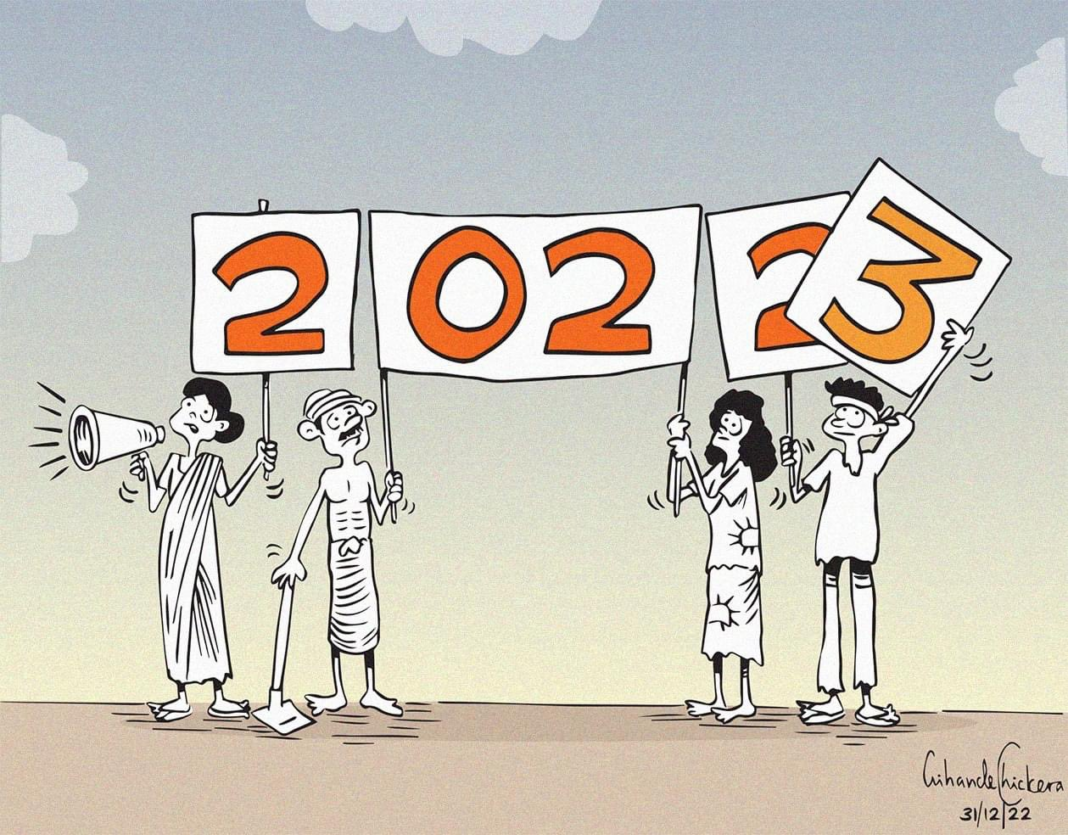 On Friday (30th December 2022), the International Monetary Fund’s Kristalina Georgieva speaking to CBS’s ‘Face the Nation,’ (not to be confused with cheap imitation shows of the same name that hog Sri Lanka’s private television media spaces), pointed to a clear and present danger.

Political leaders of nations in distress must ‘focus on your budgets, make sure that you have sufficient revenues to collect and that you spend very wisely.’ Georgieva was answering to ‘pretty dire predictions’ of a global recession portended in 2023 with the slowdown of the big three economies, United States, China and the European Union. A particular focus was the domino effect that an expected recession may have on governments liable to collapse with defaults across the world.

Taking a positive line, the IMF’s Managing Director and Bulgarian economist observed that, ‘so far, countries that are distressed are not systemically significant enough to trigger a global debt crisis.’ The countries pointed to as illustration thereof were, ( Sri Lankans would no doubt be proud to know), Chad, Ethiopia, Zambia, Ghana, Lebanon, Surinam and Sri Lanka. Resolving the debt burdens of these countries was described by her as ‘urgent.’ But if this list grows in 2023, the ‘world economy may be in for a bad surprise,’ she said.

Hence, the sage advice to politicians which underscored a crucial concern; no country in distress can recover if entrenched corruption in Government continues. That, in her own words,  ‘erodes the social contract, reduces taxes and deters investors.’ ‘Fragile states’ are those with the most ‘governance challenges,’ if these are not rectified, no amount of IMF assistance will suffice. Georgieva’s warning should be boldly engraved in indelible ink on the foreheads of Sri Lanka’s political leaders, much like how miscreants in feudal times were publicly tarred and feathered to mark their shame.

Even so, as the nation sleepwalks into 2023 facing its worst economic and societal nightmares since independence due to catastrophic governance ‘mistakes’ by racist, corrupt and ignorant political leaders helped by their acolytes in business chambers, professional sectors including legal and medical, there are hard truths to be faced. Blaming politicians alone will not do. The calamitous trajectory of the past two decades in particular shows that there is much more that is wrong with us as a nation, apart from our politicians.

Politicians did not, by themselves, pervert the Constitution by the incomplete half-creature that was the 19th Amendment or its successor, the monstrosity that was the 20th Amendment or for that matter, rob the Helping Hambantota tsunami funds (for which an ex-Chief Justice apologised, as we recall, in letting former President Mahinda Rajapaksa ‘off the hook’) and rob the Central Bank of Sri Lanka not once but multiple times. We, the citizenry, allowed all of that to happen with minimum protest.

This is akin to permitting the ugly growth of Rajapaksa-led communalism to spout, bewitched by poisonously Sinhala-Buddhist’ majoritarian ideologies. So where has the enthronement of the ‘Sinhala-Buddhist’ majority  taken us, those ringing words of being the ‘chosen ones’, the Rajapaksa leitmotif ? As Sri Lanka’s debt crisis relentlessly deepens, those who flee overseas to escape privations here were once very much part of that cheering voter base.  Meanwhile food insecurity and malnutrition has affected ‘majoritarian areas’ the most.

That includes the Southern province (the Rajapaksa heartland), the North Western and North-Central Provinces as reflected by Government data. Some years ago, a brave forest officer who protested against politically driven deforestation of mangroves in Sri Lanka on the basis that, ‘people will have no oxygen to live’ was asked by infuriated supporters of that politician as to whether they can ‘eat oxygen’? That spat was memorialised as an example of the destruction brought about by corrupt political leadership.

Now one must ask, if one can ‘eat’ the grand vistas of prosperity and splendour so energetically promised? In that sense, the promise of the ‘Aragalaya’ before it was hijacked by political forces and toppled over into violence giving the Deep State the opportunity to lash back with vengeance, was a refreshing break with the past. There was recognition by the young and the old who formed its driving force without political party loyalties, of the collective guilt that is ours for bringing the country to this state.

As we go into 2023, the nation waits with bated breath for an IMF Extended Fund Facility programme in the comforting belief that this will solve all our ills. Despite assurances of President Ranil Wickremesinghe and his merry men of the Rajapaksas’ ‘Pohuttuwa’, IMF aid did not come in Santa’s gift bag for Christmas. Neither was majorly significant assistance from any country on a bilateral basis forthcoming this year except from India and at a lesser level, from Bangladesh.

Silence from professionals in the face of calumny

That lack of assistance defied glowing promises that the ‘Wickremesinghe mantra’ would be a happy magnet for aid as the incumbent President was catapulted into his seat earlier this year. These are illusions that we must swiftly discard. The Government’s solution is to mercilessly tax the citizenry and impose further extreme burdens through massive increases on electricity supply which will destroy thousands of small and medium scale businesses already on lifelines.

Meanwhile, waking up from deep slumber, Sri Lanka’s Government Medical Officers Association (GMOA) has decided to proclaim the last week of January 2023 as ‘Black Protest Week,’  to complain against steep tax increases on personal incomes of professionals. This will culminate in a signature campaign by doctors across the country, the GMOA has said. Its agitated members were seen tripping over themselves in the media this week to ask if the Government is deliberately ‘hunting’ professionals in order to drive them out of the country.

Such eagerness to protest by the GMOA was however singularly absent when one of their members of Muslim ethnicity (Dr Shafi Shahabdeen) was witchhunted by racist politicians alleging that he was engaging in illegal sterilisations of Sinhalese mothers, which allegation took years to disprove as being entirely baseless. Neither was the GMOA heard to utter any ‘mea culpas’ for allowing the organisation to be hijacked by Rajakapsa lackeys, one of whom was, it is generally said, behind the ruinous decision to ban chemical fertiliser, sending farmers spiralling into poverty and contributing in no small measure to food insecurity today.

Solution lies in our own hands

Ironically, those who were very much a part of the regime that drove the country into ruin on on a high wave of anti-minority racism, supremely ignorant monetary and fiscal decision making and disastrous experimentation with national policies including the abrupt banning of chemical fertiliser, are trying to cleanse themselves of their sins. By itself, pleading for forgiveness should not be castigated, particularly in the spirit of Christmas which offers redemption even to the worst of scoundrels.

Yet Sri Lankan politicians are akin to chameleons, shedding racist and corrupt skins that they so proudly flaunted once upon a time. So we have the Foreign Minister condemning the treatment meted out to Dr Shafi and holding the media to account for their rabid coverage of those cooked-up allegations. That the media is, by itself, very much part of Sri Lanka’s ‘governance problem’ is undoubtedly so. There can be no quarrel with that.

But the question here is as to what was this Minister doing during the implementation of racist policies including not allowing Muslims to cremate their dead? Was he deaf, dumb and blind, as a front runner of the Gotabaya Rajapaksa Government? That said, leaving aside these deplorable charades, Sri Lanka must evidence fundamental governance reform with progress clearly shown by reining in gross political corruptors. not in theory through the enactment of laws or solemn political promises.

In the alternative, we will be left to our own devices, to (literally) survive or perish as the case may be, in a frighteningly sombre New Year.