Sleep-walking Towards Tragedy- Counting the Cost: A President’s Legacy at Risk 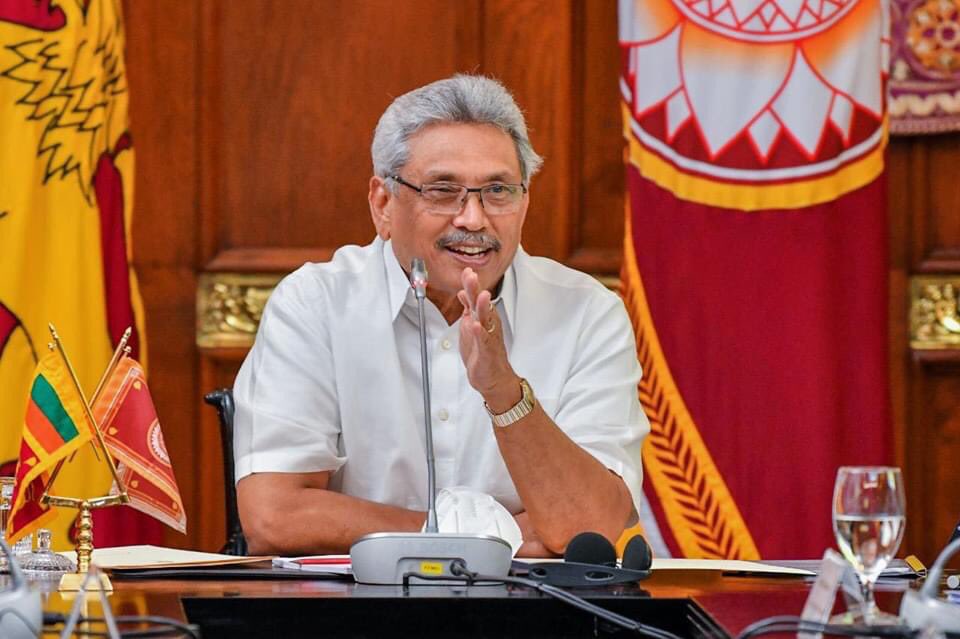 About 9,185 Sri Lankans had succumbed to Covid-19 as at 1st September. There are extraordinary scenes around the country with patients spilling out of overwhelmed hospitals. A widely circulated video shows patients lined up on the floor along corridors of the Colombo North Teaching Hospital in Ragama. There were emergency purchases of medical oxygen from India in May and reporting suggests that at present, Sri Lanka faces an acute shortage of ICU beds.

For context on just how dire the situation in the country currently is, over the seven days leading up to 30th August 2021, Sri Lanka had the fifth highest deaths per million in the world, at 54.

As the health system reaches breaking point, there is an inescapable feeling that Sri Lanka has lost control of a situation that many saw coming. The data from India and many other countries was clear; B.1.617.2 also known as the Delta variant would soon arrive preparations and precautions were necessary to protect the public.

Leading up to and during the Sinhala/ Tamil New Year period, medical experts were calling for a lockdown to at least delay the inevitable spread of the Delta variant. At the time, total deaths in Sri Lanka stood at just over 600, the daily death toll was in single digits. Community spread of the Delta variant was first officially reported in Sri Lanka on the 18th of June. The destructive April spike in India was ample evidence of its severity. The medical community had been consistent: the Delta variant was more aggressive and more transmissible.

Unfortunately for many thousands of Sri Lankans, the preservation of human life had to be subordinated to the more urgent priority of keeping open an ailing economy to serve what is ostensibly the greater, national good. During his most recent national address, while the walls continued to close in on the citizenry, the President requested “everyone in the country to be prepared to make more sacrifices…” There was no empathy for sacrifices already made, no sign of compassion given the tragic loss of life.

Speaking to the media on the 13 August, Executive Director of the Institute for Health Policy, Dr. Ravindra Rannan-Eliya stated that based on current projections, the death toll in Sri Lanka could surpass 20,000 by end 2021. He also pointed to the rate of double vaccinations at the time, which was around 10%; far too low to make a significant difference to the overall transmission rate. He further stated that Sri Lanka was at the lower end of the spectrum when it came to test and trace capabilities.

Only a few weeks later, Sri Lanka has been able to rapidly increase the fully-vaccinated rate to 30%, a testament to the efficiency of the Sri Lankan military and their 24-hour country-wide vaccination centres. Thanks to these efforts, Sri Lanka today has a far better rate of full vaccination than many other lower-middle income countries; Bangladesh (3.8%), Egypt (2%), Indonesia (12%), Pakistan (6%), Kenya (1.5%), Iran (5%), India (10%).

However, in a fast moving global pandemic, timing is everything. While vaccination rates increase, case numbers and deaths continue to surge as well. As Dr. Rannan-Eliya points out, Sri Lanka lags behind some peer group countries when it comes to testing volumes and capacity. Daily tests per million in Sri Lanka were around 500 going into the final week of August. India (1,384), Iran (1,159), Vietnam (1,644) and the Philippines (520) are all testing at higher rates than Sri Lanka.

For context on just how dire the situation in the country currently is, over the seven days leading up to 30th August 2021, Sri Lanka had the fifth highest deaths per million in the world, at 54. The only countries worse off over those seven days were Botswana (57), Eswatini (64), North Macedonia (72) and Georgia (102).

The current lockdown was not so much a decision taken by the government, but a decision forced upon it by a chorus of critics.

Through a quite exceptional vaccination drive, the military has provided significant cover for the government’s many missteps at crucial junctures. Most countries suffered high numbers of casualties during the initial months of the pandemic in 2020, yet Sri Lanka had one of the lowest death rates in the world at the time. At no point in 2020 was Sri Lanka’s health infrastructure at risk of being overwhelmed. President Gotabaya Rajapaksa declared victory against the pandemic, questioning why Sri Lanka was not being recognised as a model nation in this regard. Indeed by April 2020, the Global Response to Infectious Disease (GRID) Index by CMA Australia ranked Sri Lanka’s pandemic response as the 9th best in the world.

Colombo is not Dhaka or New Delhi; Sri Lanka’s dense urban populations are not of the same intensity or frequency as many other nations in the South-East Asian Region. Given the head start Sri Lanka enjoyed throughout 2020, there was much that could have been done going into 2021. Total deaths as at 31st December 2020 stood at 204, which given the current death toll is an indicator of just how poorly the pandemic has been managed since the turn of the year.

The current lockdown was not so much a decision taken by the government, but a decision forced upon it by a chorus of critics. Last week, the WHO’s Independent Technical Expert Group in Sri Lanka, consisting of some 14 specialists from the medical field including Dr. Padma Gunaratne, Prof. Saroj Gunaratne and Prof. Neelika Malavige, called for extending the lockdown and increasing restrictions within it. The group pointed to a study from Monash University, which calculated that locking down until 18 September would help save 7,500 lives.

Throughout 2020, Sri Lanka wasted valuable time and spent resources elsewhere instead of building the necessary test-trace-isolate infrastructure that many medical experts, including Dr. Rannan-Eliya, had been calling for. Instead there was a general election, major constitutional changes and political theatre morphing in to a scarcely believable telenovela about dynasty. International borders were opened, then closed and reopened again. At one point after the reopening of borders, Russian and Ukrainian tourists arrived in the country while case numbers and deaths in those respective nations were surging.

Vaccine Procurement: Too Little, Too Late

Despite these evidently sub-optimal decisions, Sri Lanka still had every opportunity to get ahead of the global curve. A revealing piece by Attorney-at-Law Dr. Gehan Gunatilleke laid out some startling facts pertaining to the timeline and process of vaccination procurement in early 2021.

Sri Lanka’s National Medicine Regulatory Authority (NMRA) approved the Covishield vaccine manufactured by Serum Institute India (SII), on the 22nd of January 2021. Cabinet approval was granted a few days later and on the 28th of January Sri Lanka received its first batch of 500,000 doses as a donation from India due to its ‘neighbourhood first’ policy.

The first purchased batch of 500,000 Covishield vaccines only arrived on the 25th of February, almost a month later. This crucial delay seems to have been caused by switching from a pre-authorised local agent to the State Pharmaceutical Corporation (SPC). Considering that NMRA approval was obtained by the local agent in January, the Government could have placed an immediate order with SII and received a large shipment by early February. Everything was in place for such an order until the need arose for SPC involvement.

Some reports claim that SII had requested procurement through the SPC, however as per Dr. Gunatilleke the NMRA report made no mention of this and further, SII had already delivered 5 million doses to Bangladesh through a local agent in January. Was it the Sri Lankan authorities that required SPC involvement? A fresh approval needed to be obtained by the SPC which meant going through the entire procurement process again including obtaining approval for the purchase agreement.

A Cabinet briefing revealed that the price per dose of Covishield was $5.25; Sri Lanka would eventually pay $15 per dose for the Sinopharm vaccine. In an article dated 19th February, the Hindustan Times quoted Indian officials as stating that Sri Lanka’s State Pharmaceutical Corporation had signed an order for 10 million doses which SII had set aside for Sri Lanka.

In a separate report from June 2021, Attorney-at-Law Ranil Angunawela stated: “In our opinion, if Sri Lanka was already receiving donations of an NMRA-approved vaccine by January 28, 2021, and the price of a dose of the said vaccine was predetermined, there is no further impediment in the procurement guidelines that prevent a ‘very urgent and exceptional’ procurement order to be placed within days of NMRA approval,” said Angunawela.

Cabinet approval for the procurement of Covishield through SPC was granted on the 22nd of February and the first purchased batch of 500,000 doses arrived on the 25th. The nearly one month delay left Sri Lanka at the mercy of unforeseeable externalities; a fire at the SII manufacturing facility was compounded by a serious spike in cases in India, leading to a temporary ban on exports of Covishield.

The facts point to a missed opportunity: had Sri Lanka taken delivery of a significant order of vaccines anytime during February, several thousands of Sri Lankans could have been saved from the Delta variant. Another point to consider: why did the Government not diversify its risk on vaccine procurement; was there an over-reliance on the Serum Institute of India and Covishield?

In the Public Interest

Decisions on public health have been coloured by economic and political considerations. Throughout much of 2021, the message has been clear; human lives are important but not as important as the economy. Health issues are important, just not as important as cultural considerations such as the traditional New Year or the Esala Perahera. The President is under pressure to call for an independent report into vaccine procurement but he must go further and consider the totality of Sri Lanka’s response to the pandemic, specifically public health policy and economic stabilisation and stimulus measures.

It is safe to say that the only aspect of Sri Lanka’s response that can be considered an unmitigated success is the vaccination drive. Questions remain over almost every other facet of the Government’s response. Vaccine procurement and pricing aside, were necessary investments made to expand ‘test-trace-isolate’ facilities? Were adequate measures taken to increase the number of ICU beds and Heavy-Dependency Units (HDUs)? Were there early orders of medical oxygen supplies, C-PAP machines and ventilators? Did the Government consider anti-viral therapeutics like Hydroxychloroquine or Ivermectin, which India has approved? Did the administration prioritize the elderly who make up the lion’s share of hospitalizations and deaths? Were lockdowns introduced in a timely manner with adequate time provided for citizens to plan and prepare themselves?

Given the sacrifices made by Sri Lankans, given the state of the economy and the growing death toll, the President must realise his legacy is now at stake.