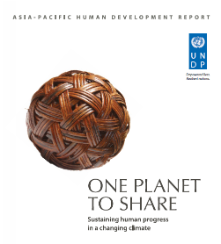 According to the report, SAARC countries, other than India and the Maldives, have not even reached Sri Lanka’s HDI for 1980 which was 0.539.

The report said Sri Lanka has vast potential to further improve the situation compared to Singapore and Malaysia.

The report hailed the country’s education sector which has made remarkable achievements as against a number of developing countries.

Sri Lanka has been recognized as one of the few countries where free health and education are available to all citizens without discrimination for more than six decades.

It says that Sri Lanka’s human development achievements are impressive, despite the fact that the country has just come out of a debilitating conflict which has damaged its very social fabric.

“Sri Lanka’s life expectancy of 74.9 years in 2011 is higher compared to most developing countries”, the report said. The report also said that the country’s health sector has made many achievements during the past several years and it enjoys the lowest infant mortality rate in the SAARC region.

“In past 20 years, many countries across the globe, including Sri Lanka, have recorded substantial progress in Human Development.

Compared to two decades ago, people today are healthier, live longer, are more educated, and have better access to goods and services, the report said.

The report also said that the 2011 global Human Development report shows that Sri Lanka ‘s Human Development Index (HDI) value increased by 28 percent between 1980-2011. ” With a HDI of 0.691 in 2011, Sri Lanka ranked 97 out of 187 countries. Among countries with a medium level of Human Development, Sri Lanka’s GII is high at 0.565 compared to a majority of countries in the medium Human Development category, indicating strong inequalities. In the SAARC region, only Afghanistan, India and Pakistan have higher values. On the indicators considered for the GII, Sri Lanka performs well on maternal mortality and education, but could considerably improve performance on labour force participation and parliamentary representation.

Another human development measure is the Multidimensional Poverty Index (MPI) which assesses severe poverty as lived and experienced in three basic dimensions: health, education and living standards. The MPI and the multidimensional poverty headcount index in Sri Lanka are the lowest in the SAARC region. Based on the national poverty lines, computed by the Department of Census and Statistics, the incidence has declined from 26.1 percent in 1990-1991 to 8.9 percent in 2009-2010, a reduction of more than 65 percent. Around one million poor people moved out of poverty from 2006-2007 to 2009-2010 as the overall number contracted from 2.8 million to 1.8 million.