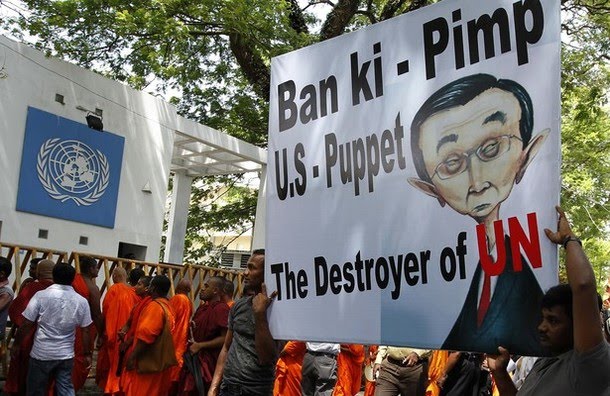 By Ranga Jayasuriya
The current government behaves as if Sri Lanka is the only country in the world to be investigated, by the UN human rights body, over the allegations of war crime and crimes against humanity. That is however not the case. (Israel is facing a fresh UNHRC inquiry into alleged war crimes and crimes against humanity in its recent military bombardment of Gaza. Earlier, both Israel and Hamas were accused by the UNHRC appointed UN fact finding mission in Gaza of targeting civilians during the 2009 Gaza war.)

What is however unique about Sri Lanka is its insular reaction to the UN inquiry, which is driven by deep seated paranoia of the ruling establishment. Israel itself refused to cooperate with the UN fact finding mission on the Gaza conflict and rejected the Goldstone report, named after the head of the panel, former President of Constitutional Court of South Africa, Richard Goldstone. However, no country, save veritable international pariahs, such as North Korea, has gone to the extreme lengths, as the incumbent government in Colombo has done, to prevent its citizens from cooperating with a UN inquiry.

The UN probe has now begun and the interviews with witnesses over the phone and Skype would commence after the 12-member investigation team, led by Sandra Beidas, sort out its paper work. The three-member panel is headed by Silvia Cartwright, former Governor General and High Court Judge of New Zealand and includes Nobel peace laureate and former Finish President Martti Ahtisaari and Asma Jehangir, former President of Pakistan’s Supreme Court Bar Association.

Government’s threats of legal action
In Colombo, paranoia and arrogance have defined the government’s reaction to the UN inquiry. Government’s threats of legal action and potential repercussions by the military forces are bound to dissuade a large swath of Wanni Tamils, the main witnesses to the humanitarian tragedy, from testifying before the panel. It could also drive cooperation from the determined members of the community into the underground and beneath the military radars. However, the fact of the matter is that evidence collected under such restrictions is bound to be overwhelmingly against the government, making its position further vulnerable.

Last week, the Tamil National Alliance offered to serve as a conduit for the witnesses who wish to share evidence with the panel. TNA MP M.A. Sumanthiran recently told crowds in Jaffna that those who wish to testify could submit evidence through the TNA. He said arrangements could be worked out to convey evidence to the war crime inquiry. However, without a large scale mobilization by the TNA or the TNA controlled Northern Provincial Council, input from the Wanni would likely to be minimal due to prevailing security concerns.

All that would lead the Diaspora elements to disproportionately influence the panel. The government ban would also keep away government allied groups, such as the EPDP and the families of missing security personnel from testifying before the inquiry. The government appears to be trying to starve the UN panel of credible information. However, the sponsors of the resolution, the US and EU are in possession of a wealth of information, including satellite imagery of the final phase of the conflict and the UN Headquarters received daily updates of casualties during the height of war from its local agencies.

However, the government continues with a misplaced strategy to sabotage and disrupt the civil society cooperation with the panel.

Earlier, Keheliya Rambukwella, the Cabinet spokesman, threatened legal action against those testifying before the UN inquiry. Last week, a meeting held in Colombo by the Right to Life Human Rights Centre in involving families of disappeared persons from the North was disrupted by pro-government demonstrators. The representatives of the European foreign missions were also invited to the meeting, which was disrupted by another NGO called “Parent collective of Disappeared Persons.”

However, government’s conduct has proved to be counterproductive and has only aggravated its plight.
Last week, after the meeting of the families of the disappeared Tamils was disrupted, the government blamed the victims. The external affairs ministry also accused the foreign missions of ‘targeting one particular community in the country, leading to the emergence of a pattern of potentially volatile situations and giving rise to the perpetuation of mistrust amongst communities at a sensitive juncture in the country’s history.’ However, issuing a statement, the US embassy hit back, condemning the disruption of the meeting and urging the government to enforce the rule of law and permit all citizens to exercise their most basic human rights, including freedom of speech and freedom of assembly. The embassies of France, Germany UK & Switzerland also issued a joint statement urging the Sri Lankan government to “ensure and respect freedom of assembly and expression.”

The government has succeeded in clamping down on the flow of information on those frequent violations of freedom of expression and assembly, largely by coaxing and coercing a large segment of mainstream media to practice self censorship on these incidents. This has kept the average local folks oblivious to the increasingly suffocating environment they are condemned to live. However, those who matter in the foreign missions, whose input to their foreign ministries would shape the nature of the future international intervention in Sri Lanka, have their eyes wide open. They are closely watching.

The Sri Lankan Government is exposing to them, the hollowness of its commitment to human rights.
[Photo: Govt backed anti UN protest in sri Lanka]
Ceylon Today