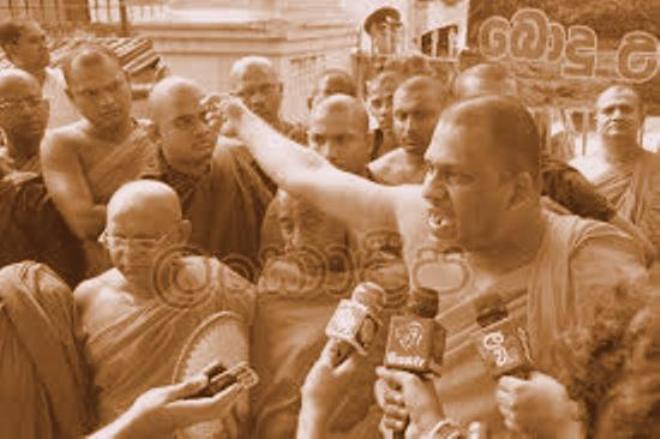 SL Muslims at the crossroads – 11 By Izeth Hussain

”If people behave like sheep, they will soon have a Government of wolves” – Bertrand de Jouvenel

My main purpose in this article is to argue that the chief antagonist of the Sri Lankan Muslims, as well as of the Sinhalese and all the other ethnic groups, the chief antagonist whom they have to confront and destroy or be destroyed themselves, is neo-Fascist nationalism. I will suggest further that what I call neo-Fascist nationalism is a spurious form of nationalism, which can never provide a satisfactory and enduring political order. But before getting to that main purpose I want to make some necessary clarifications arising out of my last article.

What is the purpose of the conspiracy? I believe that the only plausible motivation for it arises out of the Tamil ethnic problem. India is adamant on the point that a solution will be possible only through the full implementation of 13A, while President MR is adamantly against it, and since he is seen as inveterately racist his departure from power is seen as the precondition for a solution. According to what looks like a widespread view, he was offered the bait of an anti-Muslim campaign, and he swallowed it. The theory is that since the euphoria of the 2009 victory cannot go on indefinitely, he has to try to retain his popularity by appearing to save Sri Lanka from another mortal peril, this time in the form of Muslim extremism in Sri Lanka, which has behind it an Islamic thrust to gain dominance over the whole world. The theory therefore is that President MR is trying to refurbish his Dutugemunu image as part of his electoral strategy, and that means that the anti-Muslim campaign will evaporate once the Presidential and Parliamentary elections are over. I am rather doubtful about this theory for reasons that will be given later.

It is arguable that the conspiracy is working satisfactorily. Instead of using the splendid opportunity provided by the 2009 victory to solve the Tamil ethnic problem once and for all, he has presided over the creation of yet another ethnic problem, the Muslim one, bolstering his image as an inveterate racist. Very probably the anti-Muslim campaign has the support of only Myanmar and Israel, which could mean that Sri Lanka is today dangerously isolated. Internally, President MR and his Government have certainly lost the support of all the minorities, which means that around 30% of the electorate will be solidly for the Opposition. It becomes arguable that if the Opposition finds a credible common candidate, the President and his Government will have a torrid time at future elections.

The above material prompts a question that provides a transition to my main purpose in this article, which is to deal with neo-Fascist nationalism in Sri Lanka. The question is this: Why is it that there has been no demand for an enquiry into the suspected foreign conspiracy behind the anti-Muslim campaign? There is much else, apart from what was given in my last article, to establish not that there is a foreign conspiracy but that there is a prima facie case for looking into that charge. For instance there were those T-shirts worn by demonstrators here and in Myanmar which looked identical except for the logos, which obviously had a common manufacturer. Then there was a remarkable concurrence in the anti-Muslim rhetoric used in both countries. For instance a friend told me some weeks ago that, by way of illustration of the prolific fertility of the Muslims, the point was made in both countries that a grandmother, mother, and grand-daughter were all pregnant at the same time! Apart from all that, consider the serious negative consequences for Sri Lanka of the anti-Muslim campaign, which I have briefly outlined in my previous paragraph above. If there had been a comparable situation in India, we can be sure that the Government would have found itself compelled to hold a full-scale enquiry. But that is unthinkable here. Why not? I believe that the explanation might be found in the peculiar brand of nationalism that has been practiced here.

There are two brands of nationalism that are generally recognized, the first of which might be called citizen nationalism. In this brand of nationalism, ethnic and other group affiliations don’t particularly matter because an individual on becoming the citizen of a country becomes a national just as much as everyone else in that country. France made a superlative success of this brand of nationalism. At the time of the French Revolution less than half the population of France spoke French. In the succeeding period, France absorbed immigrants to an even greater extent than America, and created a strong sense of unity among its citizens of diverse ethnic origins. Behind it all was the ideology of the Enlightenment, and the ideal of democracy with its secular trinity of Liberty, Equality, and Fraternity.

The second brand might be called ethnonationalism, which is associated with Eastern Europe. There is no attempt to do away with ethnicity or decry its importance. The nation is usually built around a dominant ethnic group, with a sense of unity brought about through a process of ethnic accommodation. This is what we are witnessing in India. It has a vast multiplicity of ethnic groups, including some – comparatively a very few – which want to break away, but on the whole there is a deep sense of unity, the unity in diversity about which Indians have good reason to be proud. That unity was spectacularly demonstrated by the way the Indians came together over the 1962 Sino-Indian Border War. That unity has been possible because since 1947 India has had a fully functioning democracy except for a very brief period.

The third brand of nationalism, which I call neo-Fascist nationalism, was spotted with extraordinary insight by Mahatma Gandhi. In his famous 1938 article on the problem of Palestine, he wrote, “But the persecution of the Jews seems to have no parallel in history. The tyrants of old never went so mad as Hitler seems to have gone. And he is doing it with religious zeal. For he is propounding a new religion of exclusive and militant nationalism in the name of which any inhumanity becomes an act of humanity to be rewarded here and hereafter.”

The operative words there for my purpose in this article are “a new religion of exclusive and militant nationalism”. The word “exclusive” is the opposite of the unity that characterizes the two other forms of nationalism. That nationalism enabled a higher degree of unity within the nation state than was possible under any other state formation. It is that unity that explains a good part of the extraordinary dynamism shown by the West in recent centuries. But under Hitler’s brand of neo-Fascist nationalism all the people of Germany were not brought together. Some, such as the Jews, the gypsies, and homosexuals were marginalized, excluded, and even subjected to genocide. The other distinguishing characteristic of the two other brands of nationalism is democracy or at least some degree of pluralism. Hitler rejected the Enlightenment ideology altogether, and had nothing but scorn for the secular trinity of Liberty, Equality and Fraternity. But it has to be conceded that he too was democratic in a way because he indubitably had the backing of the majority of the German people. However his was majoritarian democracy, amounting to no more than the tyranny of the majority, which the West rejected as the antithesis of democracy as far back as the eighteenth century.

I don’t want to labour the point, but the reader should be able to see without any difficulty that the identical processes are at work here as in Hitler’s Germany. The Tamils have been conquered, and the Muslims are being subjugated. All that is in accordance with the will of the majority and the tenets of majoritarian democracy. The Muslims are not being allowed to live in peace and dignity because of the operation of neo-Fascist nationalism. Neither for that matter are the Sinhalese, so that the Muslim struggle to be allowed to live in peace and dignity should be seen as part of a national struggle for liberation.I will have to deal separately with the suggestion I made at the beginning of this article, that neo-Fascism can never lead to a satisfactory and enduring political order. The essential point is that it stands for division, not for unity.