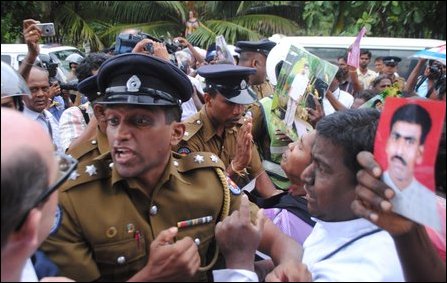 The intelligence operatives of the occupying Sri Lankan military have threatened Tamil Catholic priests in Mannaar and Jaffna, who have been active in exposing the genocide of Eezham Tamils by the Sri Lankan State. The threats against the priests in escalated following the visit by UN Human Rights Commissioner for Human Rights and have topped after British PM visited North on 15 November. The Catholic priests were active in exposing the recent genocidal experiment of birth control carried out by the Sri Lankan authorities and the priests joined the peaceful march by the kith and kin of the missing persons when they wanted to berate their plight to the visiting British PM and the foreign journalists who accompanied him to Jaffna.

The priests have complained to their respective Bishops on the threats coming from different corners of the Sri Lankan military system.

In the meantime, the Sri Lankan Defence Secretary and presidential sibling Gotabhaya Rajapaksa, called on Pope Francis at Vatican on Wednesday and handed over a letter to Pope Francis inviting him to the island on behalf of his brother. This is the second time within four months Rajapaksa siblings are campaigning Pope to visit the island.

Rev. Fr. E. Sebamalai in Mannaar, writing an appeal on behalf of the Citizens’ Committee in Mannaar, on Friday said: “Even the people affected in various forms expressing their grievances, objections or protests in the internationally accepted democratic way and peaceful resistance are not tolerated in this country.”

Fr. Sebamalai also noted that the Police in Jaffna had manhandled Catholic priests who were with the people at a peaceful rally in front of Jaffna Public Library on 15 November.

However, the visiting PM didn’t meet the grieving relatives of the missing persons in Jaffna despite the British mission officials were being fully aware of the peaceful gathering waiting outside the Public Library.

The Catholic priests and rights activists like Jude Bashil Sosai (Sunesh), who has now been subjected to the death threat by the SL military intelligence operatives in Mannaar, played a key role in bringing the families closer to the visiting Channel-4 journalists who were being waylaid by a camouflaged protest organised by the SL police and SL military intelligence operatives in civil who had blocked the road with their truck, shielding the visiting journalists from spotting the Tamil demonstrators. 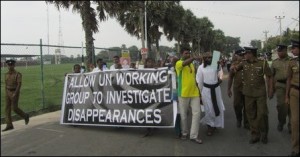 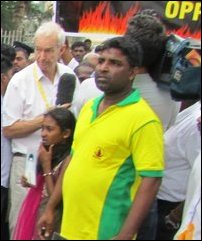 Angered by the efforts of Mr Sunesh and the Catholic priests present with the protestors, the SL military has stepped up its threats.

In the East, Jesuit Priest Fr Veeresan Yogeswaran, who is one of the leading human rights activists, was at the receiving end of the SL government’s ire after his meeting with Ms Navi Pillay during her visit to the East in August.

Ms Navy Pillay was told that what was going on in the island was a genocide against Eezham Tamils.

However, the Human Rights High Commissioner, in her intention to project the crime of genocide as a crime of bad governance on the part of the Sri Lankan State, came with an open lie to the press in Colombo stating that no one used the word genocide during her visit to North and East. 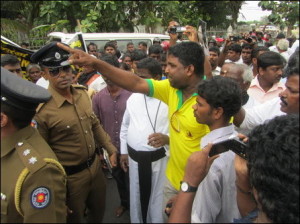 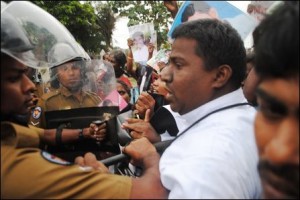 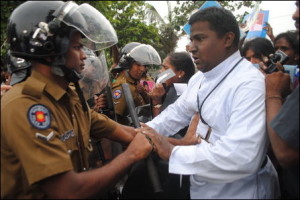 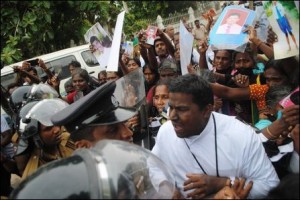