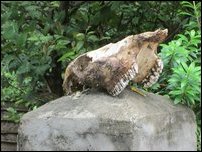 [TamilNet]
Amidst the presence of foreign journalists who have come to Jaffna in connection with the CHOGM meet, alleged operatives of the occupying SL military have been issuing death threats to the organisers of the protest scheduled to take place on Tuesday. In the early hours of Monday, heads of dead cows were dumped in front of the houses of chairman and deputy chairman of the elected civic body of Valikaamam North. The act, which is not only considered as deeply insulting, but also as reminding the days of beheading, comes as both the elected Tamil National Alliance (TNA) members were engaged in organising a protest against the transformation of former ‘High Security Zone’ lands into ‘Sinhala Military Zone’ and the demolition of houses by the SL military in Valikaamam North.

Both Mr S. Sugirthan, the chairman of the Piratheasa Chapai (PS) and Mr S. Sajeevan, the deputy chairman of the PS have been receiving anonymous phone calls with beheading death threats if they went ahead with organising the protests.

Regardless of the threats, the uprooted people are determined to stage the protest, civil sources in Valikaamam North said.