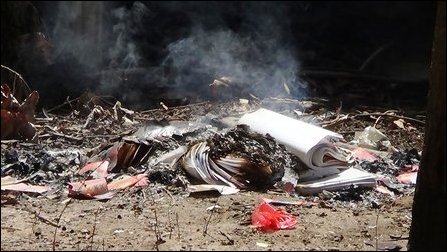 [TamilNet, ]
Eight persons, including an election monitor, Lawyer Sugas of PAFFREL, were brutally attacked by the occupying SL military in Jaffna, which besieged the residence of Tamil National Alliance (TNA) woman candidate Ms Ananthi Sasistharan at Araali in Jaffna in the early hours of Friday. Ms Ananthi narrowly escaped from the assault as her supporters had managed to send her away over the wall of the residence as the military rounded up her residence. The Sri Lankan soldiers were searching for her with the intention of physically harming her, those who were present at the residence told media and the election monitors. An independent election monitoring group, CaFFE, has openly stated that the SL military was behind the attack. The public, TNA members and election monitors of various groups are visiting the house of Ms Ananthi on Friday, witnessing the shocking attack.

Those who were attacked by the SL military were struggling to get to the hospital as the tyres of the vehicles were punctured by the soldiers.

The latest harassment is reported as the Sri Lankan military establishment has unleashed a campaign against Ms Ananthi, the mother of three and the wife of Mr Elilan, the former LTTE Political Head of Trincomalee who is reported missing after he was handed over to the SL military.

Also last Tuesday, she narrowly escaped from an attack carried out by alleged Sri Lankan military operatives on her way back from a campaign meeting. 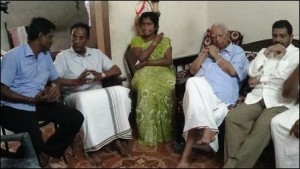 A few minutes before the latest attack, a group of SL military operatives had attempted put up posters against Ananthi Sasitharan at the residence of Ms Ananthi. The group has been putting up posters against her at several places in Jaffna city.

When the supporters of Ananthi Sasitharan, present at her residence, came out, the group had run away. But, a few minutes later, Sri Lankan soldiers rounded up the residence. They were searching for her smashing the doors at the residence.

Ananthi told TamilNet Friday that the paramilitary EPDP was also instrumental in the harassments against her.

The PAFFREL coordinator, who had arrived at the site after hearing about the incident, was also attacked despite his identification as an election monitor belonging to the civil monitoring group.

Throughout the nigh, the SL military was deployed at every junction, from Jaffna city to Araali. The SL soldiers, carrying stop signs, were blocking independent election monitors and journalists from reaching the residence of Ms Ananthi Sasitharan
TN