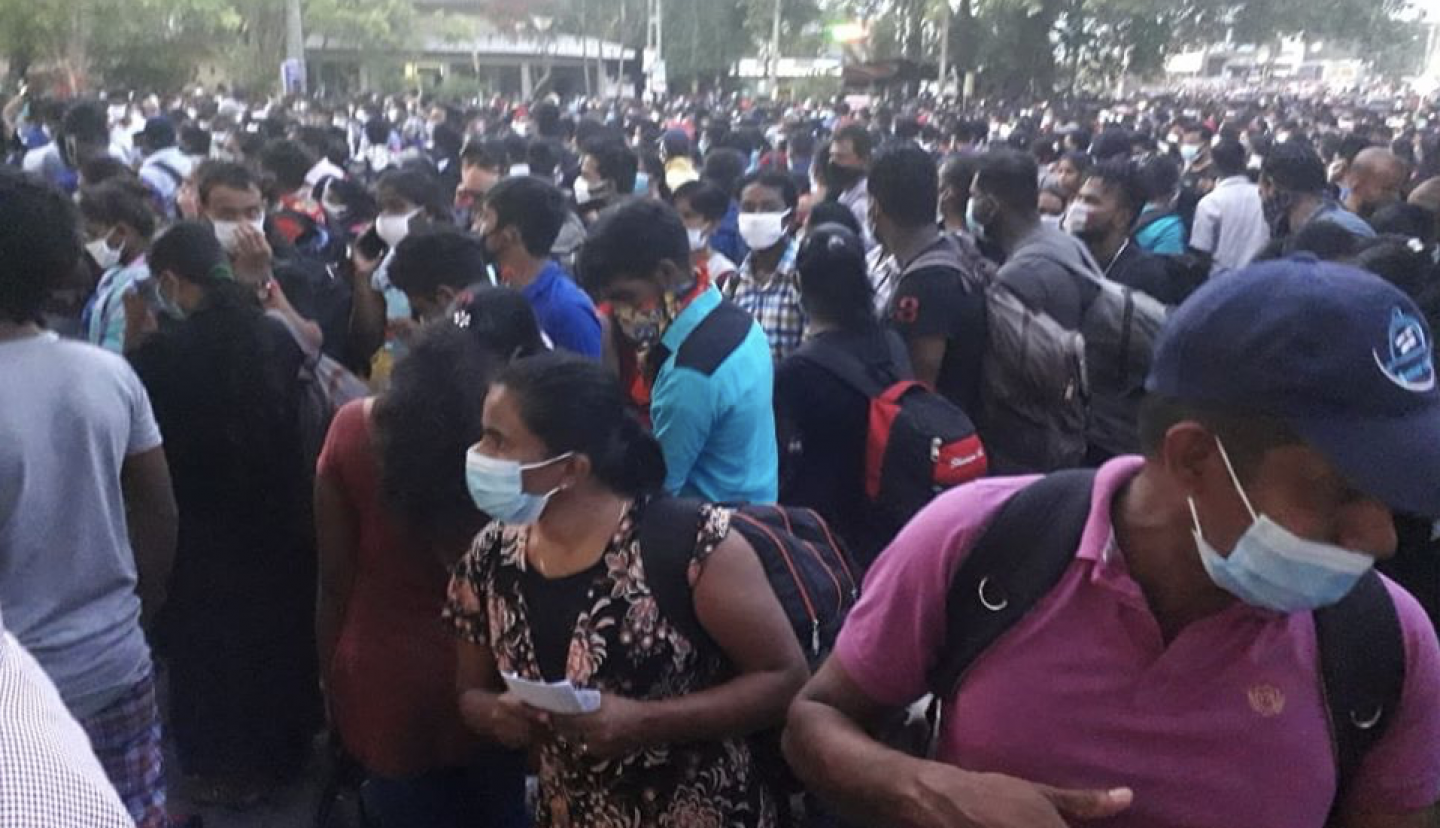 Image: Some FTZ workers were sent back to their homes buses arranged by the Government.

On the 27th of March, Minister of Industrial Export and Investment Promotion and Minister of Tourism and Civil Aviation Prasanna Ranatunga instructed the Board of Investment (BOI), the country’s investment promotion agency, to close all Free Trade Zones (FTZs) in the country until further notice, as a measure of preventing the spread of COVID-19. The workers at in the factories located in these Zones were to be sent to their villages with the assistance of the police and military.

According to statistics from the BOI, 5144 workers in the Katunayake FTZ, 3264 workers at the Biyagama FTZ, 450 workers in Meerigama, Wathupitiwela and Malwatta FTZs, 962 workers in Horana FTZ and 280 in Seethawaka FTZ were sent back to their homes by both Sri Lanka Transport Board (SLTB) buses and private buses arranged by the Government.

However, many workers were unable to leave due to the limited number of buses arranged, and the uncertainty of when factories will resume work. To this day, they remain trapped in their rented boarding houses within these zones. Civil society estimates that there are about 15,000 workers stranded around the Katunayake FTZ. Grama Sewaka reports indicate a total of 2275 workers in the Awariwatta, Jayawardenapura, Walanagoda, Amandoluwa, Katunayake and Andiambalama Grama Niladhari (GN) divisions trapped within their boarding houses with little to no access to essential goods.

Workers state that even though there are supply trucks with goods such as vegetables and fish doing rounds in the area, they are unable to purchase anything because they don’t have money. Some workers have found it difficult to obtain a recharge card for their mobile phones to contact their loved ones, or to buy sanitary pads. There also have been reports that owners of these boarding houses have repeatedly asked their tenants to pay this month’s rent. Other than distribution from a few non-governmental organizations and civil society groups working in the area, they have not received any relief rations. The GN has declined their request for the government’s Rs. 5000 relief pack since they are not registered voters in the area.

A majority of the workers trapped in the FTZs are manpower workers, who are considered daily-wage earners. They are entitled to Samurdhi payments as daily-wage earners. However, since they work in the FTZs, they have been removed from the Samurdhi allocation lists in their home villages, and therefore cannot access the welfare payment, or the Rs.5000 relief package. Many of the manpower workers haven’t had work since the 12th of March and have lost almost a month’s salary due to the prevailing situation. They continue to live in uncertainty about when, or whether they will receive any work.

Even after curfew was imposed, a few factories continued their production with a portion of their workers. ATG Gloves (Pvt) Ltd. in Katunayake continued their production with male workers only, who were advised to keep a 1-meter distance between when working. Workers were asked to open doors and taps using their feet as health and safety precautions. Cheap way, EXPO and UTP in Katunayake have also continued production with a small number of workers, but have not imposed any precautionary measures as above. Lalan Rubbers (Pvt) Ltd. in the Biyagama Free Trade Zone resumed service on the 16th of March. Workers complain that the transportation arranged to take them to their villages were not functioning according to COVID-19 prevention guidelines. Further, workers stated that they only received masks from the factory. Ansell Lanka (Pvt) Ltd. and Rainwear (Pvt) Ltd. in Biyagama continued production during the curfew with a limited amount of workers.

A number of factories which provide workers with a Sinhala and Tamil New Year bonus informed staff that they are unable to do so this year, due to the current crisis. This is an injustice to the workers; this bonus is credited for the work they have done and the factories’ earning for the past year, while factories were closed only for 10 days due to COVID-19. Elegance Manufacturing and Trading International in Seeduwa has not yet paid their workers their salaries for the month of March. When the workers inquired about this, they were told they would be paid on a date that changed four times. They have not yet received their wages. The company employs nearly 600 people.

On the 5th of April, Sri Lanka Apparel Exporters Association (SLAEA) Chairman Rehan Lakhany told the Business Times that “at least 30 per cent of the workforce of the entire apparel industry is likely to get laid off, including permanent staff as well”. Such reports on future layoffs have spread among workers and civil society groups working closely with them. We are concerned whether these workers will be let go in an impromptu manner, or in a manner abiding with Sri Lanka’s labour laws, where workers’ benefits will be taken into consideration. A worker from Screenline Holdings (Pvt) Ltd. in Katunayake said they are uncertain about their jobs, as the factory has already outsourced some of their internal manufacturing to third parties outside the factory.

With the Government’s decision to relax curfew, factories are gradually beginning to resume manufacturing. However, there are many health concerns that need to be taken into account when factories are reopened. Boarding house units around the FTZ are often overcrowded; there are 12 to 20 rooms in a boarding house, where one room is occupied by two to four people. These boarding houses could potentially be a breeding ground for a COVID-19 outbreak, if prevention measures are not taken. In the event that the Zones are reopened, the BOI should provide transport to bring back workers from their homes to the boarding houses, in keeping with COVID-19 prevention health and safety guidelines. Safe transportation should also be provided daily, for workers to travel between factories and their boarding houses.

BOI statistics show that Sri Lanka’s apparel export industry is one of the largest contributors to the country’s economy, accounting for approximately 44% of its total exports, and providing about 33% of manufacturing-related employment in the country. The workforce in the FTZs – a majority of whom are women – makes up about 15% or the country’s total workforce. It is of utmost importance to prevent any outbreak of COVID-19 within the industry, as well as to ensure job security to its workforce.