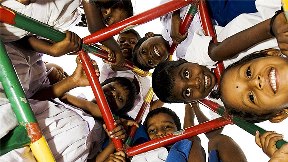 Since 1945 when education in our country was made a free service Sri Lanka was able to proudly proclaim that it had one of the finest education systems East of the Suez canal. As a result , we posses one of the highest literary rates in Asia and many of the brightest and the best who have served  our country in various fields have been products of this system – the envy of many South Asian countries. Within this, our universities provided the highest levels of education to its graduates. Even today, many of those who hold top positions in state sector as well as the private sector are products of this system.
That is why all governments since independence gave the utmost priority to protecting and nurturing  our education system but unfortunately since 2005 the priority given education has rapidly dwindled.

Since 2005, the government spending on education has been slashed from 2.9% of GDP to a shocking 1.9%. Even our neighbors who used to look up to our education system as a role model are investing more in Education.

The Maldives (many of its leaders were educated in Sri Lanka) is spending 8.7% of GDP on Education.

As a matter of interest, even Sub Saharan Arica spends 4.7% on education.

The cynical attitude the Rajapakse regime has towards education and the educated is further highlighted by the fact that the government spending for universities was slashed to 0.27% in 2010. Because of the low salaries, some of the best lecturers are compelled to seek greener pastures while the others who continue to serve in their motherland are labelled as thugs or terrorists by this government.

The Rajapakse regime, instead of coming to grips with the calamitous situation in the Education sector today, is busy trying to find scapegoats to justify its own inefficiency  while trying to cover up its own secret plan to destroy the free education system as we know it. Like most authoritarian regimes, the Rajapake regime is wary of educated persons and the intelligentsia who are seen as an obstacle to their agenda.

If you look at the type of persons who are running this regime, it is obvious that what is appreciated is Brawn and not brains.

Even in the Z score fiasco, various scapegoats have been put forward to justify this shocking tragedy where over 6500 A Level students have had their hopes shattered due to the sheer incompetence of the executive. Some blame the Ministers, Ministers blame the bureaucrats and the bureaucrats blame the Z score system while the real culprit is sitting tight passing the buck as he usually does.

The Z score system was introduced in 2000 and since 2001 this system was used for nearly 10 years without a problem.

Using the aggregate of raw marks for university admission was an unreliable and obsolete method (discarded by most countries) and was proving to be a grave injustice to students.

The Presidential Task Force on General and University Education of 1998 proposed as one of its recommendations;

‘Allowing students to take three subjects instead of four, introducing General English and the common general paper as mandatory, bringing forward the exam from April to August, that the A level not be the sole criteria for university admission and to broaden criteria as done in the UK.’

The UGC, the Examinations department and experts from several Universities participated in developing such a system and in 2000 an accepted system of standardization was recommended; namely the Z score system which was then approved by the then President and the Cabinet.

In 2001, the first batch of A level students experienced University admission selection under the Z score criteria. The Exams department became fully geared and thoroughly prepared itself to face this new challenge. The computer systems were upgrade and new technical expertise was introduced well ahead of the exam. The UGC and the Ministry worked in close partnership to ensure that the students will not be penalized during this critical transition.

The students who offered four subjects and those that three were taken as two ‘separate exams’ and two sets of ‘Z scores’ were calculated. Thereafter all the Z scores from both sets were ranked together into one group and admissions were processed very smoothly and efficiently during that transition year. There after this same system was repeated with no problem for nearly a decade until once again a similar situation arose in 2011 when students from two types of syllabuses sat the exam. This time, the authorities were ill prepared and did not foresee the eventualities that were to follow. Unlike in 2001, in last years exams the marks of all the students from both groups were pooled and common Z scores were formulated. Many students from the previous syllabus got high scores whereas many from the new syllabus got left out. Certain students who had scored very high results were deprived of university admission as a result. When the Examinations dept realized this situation it was too late and attempts to remedy this situation needed time.

This when the executive entered the picture and ordered that the results be released on the 26th December 2011 in spite of many requests for more time from the Ministry.; the day after Christmas.  is called Boxing day in the Christian world when one is meant to open gift boxes. The A Level students were thus given a gift by this regime they will not forget for the rest of their lives; since then chaos reigns in the A level sector and young students and their parents are now forced to petition the SC for justice.

Mr. Speaker – We have an anti Midas in our midst; Everything King  Midas touched turned into gold where as everything our King touches seems to crumble into dust these days.

However, the future of our youth is now at stake and as such no time for acrimony. We must first look for remedies before looking for scapegoats.

Many of the experts who handled the Z score issue 10 years ago are still available.Swallow your pride for the sake of these students and get them to revisit the 2011 exam marking systems and access to all the raw marks plus Z score for an exhaustive study and anaysis. Within three weeks they could be asked to do fresh calculations on the two sets of Z scores and fresh rankings could be done. This is a do able task provided political interference is kept out.

Not only the students, the academics are also out on the streets. FUTA with its membership of over 4000 has two sets of demands; the first is outstanding salary related demand and the other relates to the state of state education. Both are very reasonable demands. The complete implementation of  of the Jiffry – Ranasinghe proposals of 2008 and for the government to increase its spending on education to 6% of GDP. They also protesting about the funding cuts, lack of autonomy and the politicizations of Universities.

Whereas many qualified academics are leaving our universities for highly paid academic positions abroad, many of the leaders of FUTA have opted to stay behind because they have a vision for University education in this country. These university academics, who have taken the bold and courageous step to serve in this country can earn 10 times as much as they earn here at a Foreign university where Sri Lankan academics are still very much in demand. Even in Sri Lanka a senior engineer foregoes nearly 2/3 of benefits when he leaves a private sector position and joins a University.

At this stage, I would like to table the excellent paper prepared by the University of Moratuwa Teachers Association and I would like to request the members from both sides of the house to spare two minuites of their time to go throgh this simple but effective presentation.

The government must, for the sake of future generations, give a serious ear to the FUTA leaders instead of trying to abduct them in white vans and slinging mud throgh the media. These Trade Union academics are clever, young and committed and should be part and parcel of the decision making process. If I may quote from an excellent article written by Dr. Dileni Gunawardene, herself a senior lecturer at the University of Peradeniya ;

Anyone who has the future of this country as a priority in their hearts and the minds will not object to the government spending 6% of GDP on Education and this house must endorse this request with one voice. Now that the war is over, the peace divided to the people of this country should be given in the form of enhanced funds to the Education sector. In fact, as the UMTA document points out, reducing defense spending by 4% can double  University recurrent spending.

Reducing the colossal waste and corruption is also essential. We could have trained  27000 engineering graduates with the US$162m the country lost in the hedging deal. In fact , if  the government stops wasteful extravaganza like Commonwealth Games Fiasco, The ILLFA bollywood fisco and other Presidential extravaganzas we can easily reach the 6% target. Unfortunately for this country, while the future of our country is crumbling before our very eyes, our Nero is doing the reed dance with the King of Sawziland and other such kleptocrats.
LNW