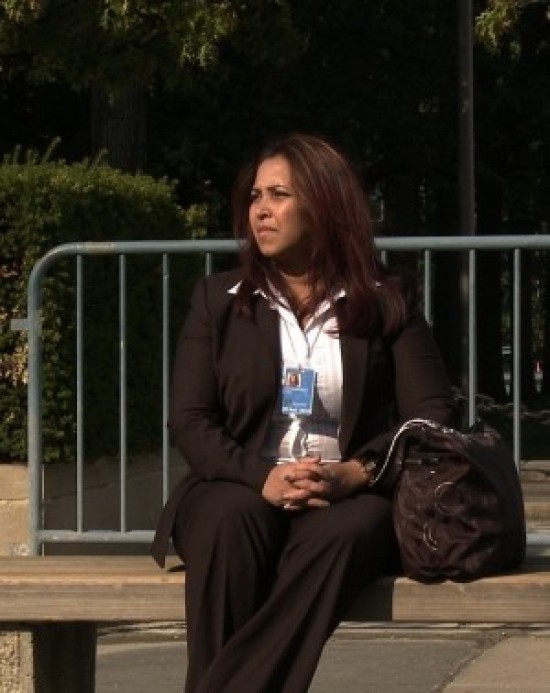 Lasantha Wickrematunge is probably not a name most people in the Western World would recognize. His martyrdom as the editor-in-chief of Sri Lanka’s critical newspaper, The Sunday Leader was, unlike the parts that Hollywood trouble-seeking trailblazers like George Clooney or Matt Damon play, not a role he wanted. But Lasantha loved to tell the truth.

Seekers after truth
That insistence on making the world know what was really happening in his country made him an opponent of the government. It also caused him to be gunned down in broad daylight in the capital of Colombo by eight assailants a few days after his wedding. His widow, Sonali Samarasinghe, also a journalist and lawyer, was forced to leave Sri Lanka shortly after the killing.
Silenced Voices, a New York premiere documentary recently presented as part of the Human Rights Watch Film Festival at Lincoln Center, is the story of Sonali’s exile and other journalists like her — seekers after truth, wandering the world like living ghosts, trying to tell a story that may never be heard in their own country.

The first image we have in Norwegian director Beate Arnestad’s stirring account is not one of the tortured exiles, but rather of Arnestad herself, crouched in the backseat of her guide’s car, staring out at the surrounding bush and the ramshackle shacks they pass along the roadside. She’s an attractive, fair-complexioned woman with a definite cinematic presence. Her first words, in Swedish with English subtitles, tell us this seems to be a cursed place where “nobody tells the truth.”

Arnestad’s destination this time is the camps, where huddled refugees fashion a hand-to-mouth existence for themselves. One woman, toothless and haggard beyond her years, has called this desolate place her home since the beginning of the conflict; another massages the deformed clumps of her little boy’s legs — his eyes not asking for sympathy, but simply grateful for the rare attention from a stranger. In another sequence, one of several videos the director managed to obtain, we hear shots of cluster shells. Civilians run helter-skelter for cover but there is none in these flat open areas of scrub and dry earth. Still another shows government soldiers, guns at rest, alongside a trench of dead bodies, some adults, others children. One journalist explains that the female corpses are often stripped of their clothing as a form of humiliation.

Voices in hiding
Harrowing images are intercut with Arnestad’s interviews with her journalist subjects. Night shots of Berlin’s railroad yards, long stretches of urban buildings with the camera in motion throughout the ride, give us a sense of flight. The deep-toned background music that undercuts this sequence effectively adds to the suspense. Bashana Abeywardane, another voice in hiding and given crucial support by PEN International, is seen sharing a video with Arnestad of a Tamil prisoner’s assassination by government forces.

In yet another scene, a middle-aged couple has been given asylum in Germany. Arnestad shows them seated on a city park bench. In their quiet limbo, they seem like two grown orphans with nowhere to go. The woman’s voice is desolate: “I don’t see a future here. We live day after day. Our shoes are not suitable for winter…We hope one day to go back.” Another individual, A. Lokeesan, is a handsome young man living undercover in India, another escapee from the country he has always known. At one point, the director tells the young journalist that Indian intelligence knows about her presence in the country and subsequently, she must relocate him quickly. When she shows a video of a young girl and her brother crouching over the body of their slain mother — the girl screaming, “What will become of us, we will be orphans!”— he rises, wiping his tears and turning away from the camera in the darkened room. There’s nothing left to say.

To deliver a critical response to this documentary is bordering on the inconsequential, in the wake of the honesty and bravery of intent it manages to deliver to the audience. If anything, a European sensibility of cinema vérité, allowing the subtleties of facial expressions, muted responses from the subject in question to fill in the blanks, is a directorial trick if you will, to convey the truth of the moment. In the case of a documentary where such a large part of the Western world is unaware of the extent of Sri Lanka’s tragedy, a larger dose of history could have helped the situation.

Palpable presence
Throughout the film, Sonali Samarasinghe is a palpable presence. From the carefree bride on her wedding day to Lasantha to her sobering day to day existence in New York City, stationed in front of the United Nations with its waving flags, she continues her search for justice. Will she be met with something other than deaf ears? “The UN is really a eunuch. It’s like an insider’s club. Sri Lanka is now at peace,” she bitterly remarks.

Sonali makes several attempts in the film to speak with Shavendra Silva, the deputy ambassador to the U.N. from
Sri Lanka, to no avail. (As of June 29, 2012, on Sri Lanka’s Permanent Mission to the U.N. on the New York Web site, Ambassador Palitha Kohana has issued a statement regarding the U.N. Global Counter-Terrorism Strategy. Though he admits that “the menace continues in different forms and manifestations,” he goes on to say that “in 2009, with the defeat of terrorism, we brought to an end a dark era of daily bombings…the government has attempted a policy of restorative justice.”

It is clear that Sonali and Arnestad are not afraid to examine what that “policy of restorative justice” really means.

The Background Story
Sri Lanka is a tropical island lying off the southern tip of India, a paradise of natural beauty that has long attracted the unsuspecting and adventurous hordes of a more fortunate world. But not unlike the wiles of the fabled Eden, the serpent which lies underneath is a deadly adversary. A long and bitter civil war arising out of ethnic tensions between the majority Sinhalese and the minority Tamil communities in the northeast has turned the country into a wasteland of unbelievable proportions.

Dating back to the conquest in the 1790s and a centuries-long rule of Portuguese and Dutch traders, the British won out, leaving a sizable footprint on the landscape. They brought in Tamil laborers to work the coffee and tea plantations in the highlands of what was then called Ceylon. Of course, the Buddhist Sinhalese resented these Hindu upstarts and the die was cast.

Catapulting this tinderbox of hatred and separatism into the 20th century and a shaky independence in 1948, a bloody governmental conflict erupted against the Tamils by 1983 and their insistence on self-rule. The Tamil Tigers (the LTTE), founded in 1976, carried out regular suicide bombings in the capital, this being only one dreaded form of revenge. By the time the cease-fire was declared in May of 2009, after 25 years of fighting, more than 70,000 people were proclaimed dead during the final months of the conflict. While the Tamil Tigers used civilians as human shields, the government’s military forces indiscriminately shelled civilian areas, including hospitals. Protestors were treated as traitors and over 250,000 Tamil refugees were hustled into camps to waste away from the world’s eyes.

The Silencing of the Present
And now, three years later, after the supposed cease-fire, where does the country find itself?

In a question and answer session following the screening, the director Beate Arnestad and Sonali Samarasinghe, the widowed journalist featured in the film, were only too willing to share their impressions. Arnestad is no stranger to this conflict. She is a perfect example of someone who doesn’t choose her destiny but is chosen by it. When her diplomat husband was transferred to Sri Lanka in 2003, she witnessed soon enough what travesties were being committed. Her groundbreaking film, My Daughter the Terrorist, about two young women who become suicide bombers for the Tamil insurgents, brought international attention to the country.

“Three years after the cease-fire,” emphasized Arnestad, “the media is not free, no investigation is going on. The media doesn’t want to care. If they do, they’re in harm’s way.” Sonali has created a Web site for a dialogue between her people. “There’s a Diaspora — it’s like two countries that need to get back together.” Both women were eloquent and remarkably calm in their responses, considering the atrocities they have encountered. “My mission is to find justice for my husband,” Sonali explained, “Fear is pervasive. There’s a lot of self-censoring. They are so traumatized and they want to move on.”

For Arnestad, the number of victims is still numbing. “For three years we were not allowed in the war zone. Ninety-thousand women are widowed. There are over 25,000 orphans.” One audience member, challenging these reports, announced that her Sinhalese boyfriend said it was exaggeration — that “everything is fine in the country.”
A moment of silence followed. Then Beate said in response, “Yes, 50 journalists have fled. All activists have fled. And everything is fine in the country,” (according to official sources, nearly 25 journalists have been killed since 1992, at least ten of whom were deliberately targeted by suspected government or Tamil Tiger forces).
As Sonali tells us, “I believe journalists can change the world. If not, why are we here? My husband is like the wind at my back.”

(The Human Rights Watch is one of the world’s leading independent organizations dedicated to defending and protecting human rights. Through the Human Rights Watch Film Festival, they bear witness to human rights violations and create a forum for courageous individuals on both sides of the lens. This year’s festival at the Film Society at Lincoln Center was organized around five themes: Health, Development and the Environment, Lesbian, Gay, Bisexual, and Transgender (LGBT) and Migrant’s Rights, Personal Testimony and Witnessing, Women’s Rights, and Reporting in Crises. Silenced Voices is an entry in the last category.)
Pictured: Journalist Sonali Samarasinghe in “Silenced Voices,” a documentary by Beate Arnestad. Photo Credit: Beate Arnestad. All Rights Reserved.
Courtesy Galo Magazine/LS