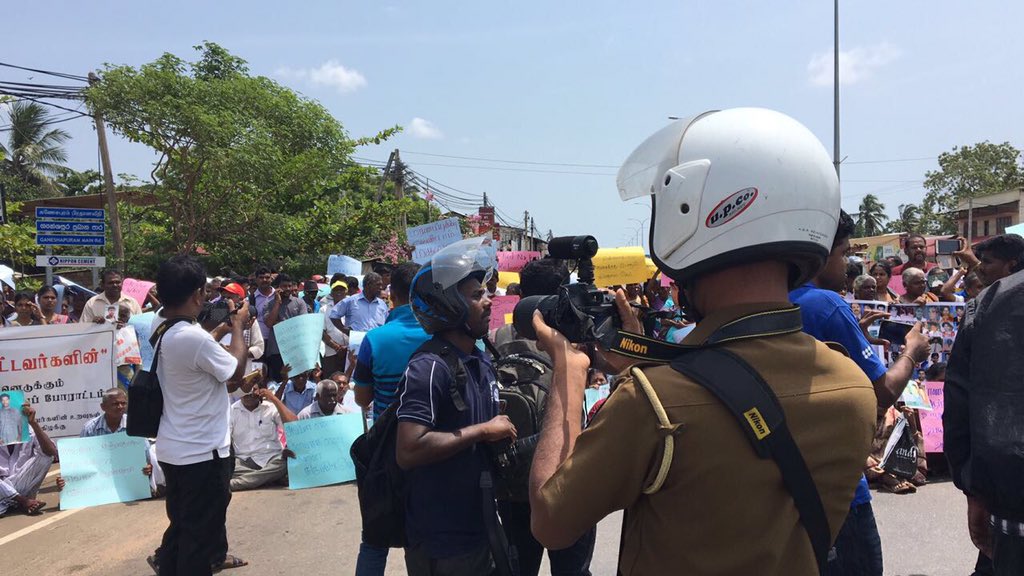 Shrinking space for human rights voices and dissent, and concerns over the terms of engagement between government and civil society

A statement by concerned human rights and democratic rights, activists and organisations

As individuals and organisations committed to human rights and democratic freedoms, and the rights of freedom of expression and dissent, we are deeply concerned about recent attempts to stifle voices of human rights activists and silence dissent.

On 17th June, Minister for Justice and Buddha Sasana, Wijeyadasa Rajapakshe, publicly threatened to remove Mr. Lakshan Dias, Attorney-at-Law, and a well-known human rights activist, from the legal profession, in response to Mr. Dias raising the issues of attacks on Christian places of worship since 2015. The Minister prefaced this by virtually condemning human rights NGOs in general. He said, “In our country there are organisations who claim to be protecting human rights, who are dependent on NGO funds, who are trying to destroy the peace between the peoples of our country and turn this country back into a heap of fire; there are a few individuals like that.” (Translated from Sinhala)

Minister Rajapakshe has since been reported reiterating his comments in an interview to Ceylon Today (22 June 2017), claiming that “NGO funded traitors” are fermenting unrest in the country. He also claimed that the NGOs misled the United Nations Special Rapporteur on the Independence of Judges and Lawyers, who, in her latest report, highlighted some serious shortcomings in Sri Lanka’s justice system.

It is as much a matter of great concern as it is revealing, that a senior cabinet minister presiding over the Ministry of Justice in the so-called Yahapalanaya government, resorts to vilifying, demonizing and threatening human rights activists and human rights NGOs. While hardly the first such instance, it is especially ironic that his comments come as the Ministry of Foreign Affairs has launched a consultation process with human rights activists and NGOs on its draft report to the UN Human Rights Council as part of its Universal Period Review (UPR).

Human rights activists and NGOs have been issued an open invitation to participate in the meetings as part of this UPR process. Under the circumstances the question arises to whether and how we can expect a principled engagement given the failure of the government to officially distance itself from Minister Rajapakshe’s disturbing comments.

The Minister’s rhetoric, troublingly reminiscent of the rhetoric of the previous regime, is indicative of the continued legacy in Sri Lanka of governments attacking those speaking inconvenient truths. Indeed, this also echoes in the recent decision of President Sirisena to sack Mr. Sajeeva Samaranayake as Deputy Chairman of the National Child Protection Authority (NCPA), and the NCPA’s decision to interdict its own Attorney, Preethika Sakalasooriya.

It is widely reported that Mr. Samaranayake’s affidavit, which was attested by Ms. Sakalasooriya, to an Australian court listing shortcomings in the country’s child protection system, was what prompted action against them. According to the Sunday Times (18th June 2017), the President has ordered an investigation into “how and why the affidavit was issued, whether such actions had been done before, and whether NCPA officials had received any ‘benefits’ from non-governmental organizations (NGOs) for engaging in such activities.”

These are but the most recent in a series of incidents that point to a disturbing tendency of shrinking space for critique within and outside government, and signs of intolerance for expressions of dissent. It was not long ago that that the President himself called on Field Marshall Fonseka to discipline the country and restore order in the face of strikes.

But this has already been the practice. Beginning with the brutal police attack on Higher National Diploma in Accountancy students in October 2015, there have been many instances of police attacking peaceful protests by students. The brutal attack on the student protest over SAITM last week, and the subsequent arrests, is only the latest manifestation of the repressive face of the Yahapalanaya state. Protesting workers have also been targeted, with the Navy being deployed to suppress protesting port workers in Hambantota in December 2016 while contract workers from the Ceylon Electricity Board (CEB) were arrested for a peaceful protest in January 2017.

Human rights activists in the North and East continue to remain under surveillance and subject to restraints and threats. The blocking of a remembrance event in Mullivaikal on May 18, and police harassment of the organizers and activists involved, also underlines disturbing continuities of policies from the previous regime.  These concerns are further amplified by certain significant legal reforms and measures proposed recently, especially the new counter terrorism law, the media standards council bill, and the recently withdrawn amendment to the code of criminal procedure, all of which encroach in different ways upon fundamental rights and freedoms.

We call on the President and the Prime Minister to:

We also call on individuals and organisations committed to democratic freedoms and human rights, to seriously re-consider the terms of engagement with the present government. The outcomes of the processes of public consultation and engagement with civil society with respect to constitutional reform and transitional justice have been ignored or instrumentalised in forums like the UN Human Rights Council.

In the meantime, the democratic space and freedoms that this government promised to protect are facing serious threats as a result of its own actions or inaction. With the space for principled engagement with the government continuing to narrow, we are bound by our principles to challenge and question the government.