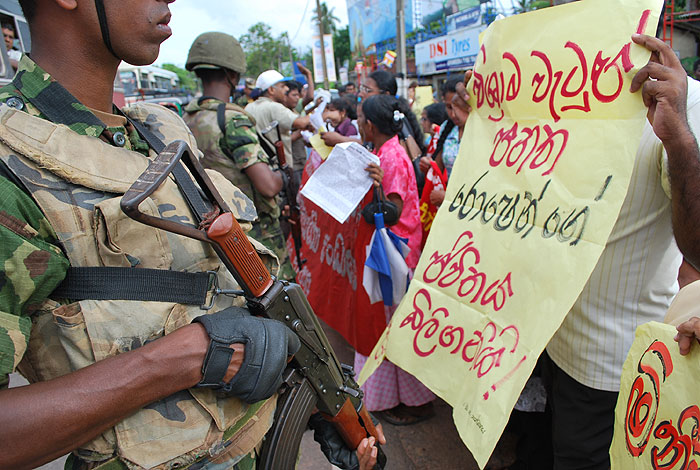 The one-man commission appointed to probe the 2011 bloodletting and chaos at the Katunayake Free Trade Zone that left one worker dead and over 300 injured has proposed in its report that all those affected should be compensated and that the Police personnel on duty at the time of the incident must be dealt with by law, irrespective of rank and file.

The Police, from the top-most official to the lower ranks, both male and female were totally responsible for the 2011 bloodletting and the ensuing chaos at the Katunayake Free Trade Zone on 29 May 2011 the Commission of Inquiry has stated in the report.

Retired High Court Judge Mahanama Tilakaratne was appointed as the one-man commission to probe the bloody events that took place at the KFTZ during the final week in the month of May 2011. He adds that following his findings he has concluded that the violence and the bloodletting could have been averted if there had been proper orders from the Police hierarchy.

But instead, apparently on orders from the top, the Police behaved like hooligans as they crashed into the KFTZ armed with an assortment of weapons from assault rifles to iron rods, poles studded with nails, chains and clubs, beating up unarmed workers including pregnant women. They had also stolen a gold chain.

Over 800 policemen, many in uniforms lacking their Identification numbers, went on to vandalize private property in the area and smashed up parked vehicles including those transporting injured workers to nearby hospitals, with no senior gazetted officers in sight.

They had either kept away in the hope of promotions or a scholarship later on or went into hiding out of cowardice, the report states.

“Police personnel also forced pregnant women to kneel down before assaulting them. Several workers who had taken refuge inside washrooms were dragged out and bashed.

“The conduct of the Women Police Constables (WPCs) was deplorable. Females in hiding were pulled out and forced to kneel down, and were insulted and humiliated. Police raised their weapons against the sick and against pregnant women who had nothing in their hands. They were taken to the Katunayake Police Station and beaten again and again. Many injured persons had fractures, bruises, contusions, and large wounds”.

The report further states “In the circumstances, Police Officers acted contrary to the law, the superior officers were indifferent and failed to issue proper orders which enabled those of lower ranks to behave like thugs. Behaviour of the workers inside the Zone was such that Police in the circumstances acted in excess of the powers given to them by law, and deserve to be punished.

“Finally, the senior police officers allowed the lower rankers to resort to violence and hooliganism, and the workers belonging to several unions, voluntarily or some under pressure, joined the protesters and became victims of atrocities committed by Police”.

The intervention of local politicians also created an adverse impact in the minds of the employees and a Minister holding discussions without the participation of union officials created suspicion amongst them, the report added.

The report also questions the decision to draft in police personnel from stations such as Modera, Slave Island, Dam Street and Pettah when the North Western Province (NWP) has over 100 Police Stations with 10 separate divisions.

In conclusion, the report states that those who sustained serious injuries and fractures should be adequately compensated while the Police Officers, irrespective of rank or file, should be dealt with according to law in order to save the image of the Government and the Police Department.

Meanwhile a top trade unionist yesterday welcomed the Government’s decision to release the report in keeping with the Right to Information Act after it was kept in limbo for the past six years.

“However the authorities must, at the very earliest, follow up the recommendations mentioned in the report if it needs to protect the image of ‘good governance’, Palitha Athukorale – a Secretary with IndustriaLL told Ceylon Today.

He added that several leading trade unions will be meeting shortly to discuss plans for future action should the Government back track on the recommendations suggested in the report.

IndustriaLL is the single largest global trade union packing a membership of some 50 million workers in 140 countries.