‘She Is a Hero’: In Myanmar’s Protests, Women Are on the Front Lines 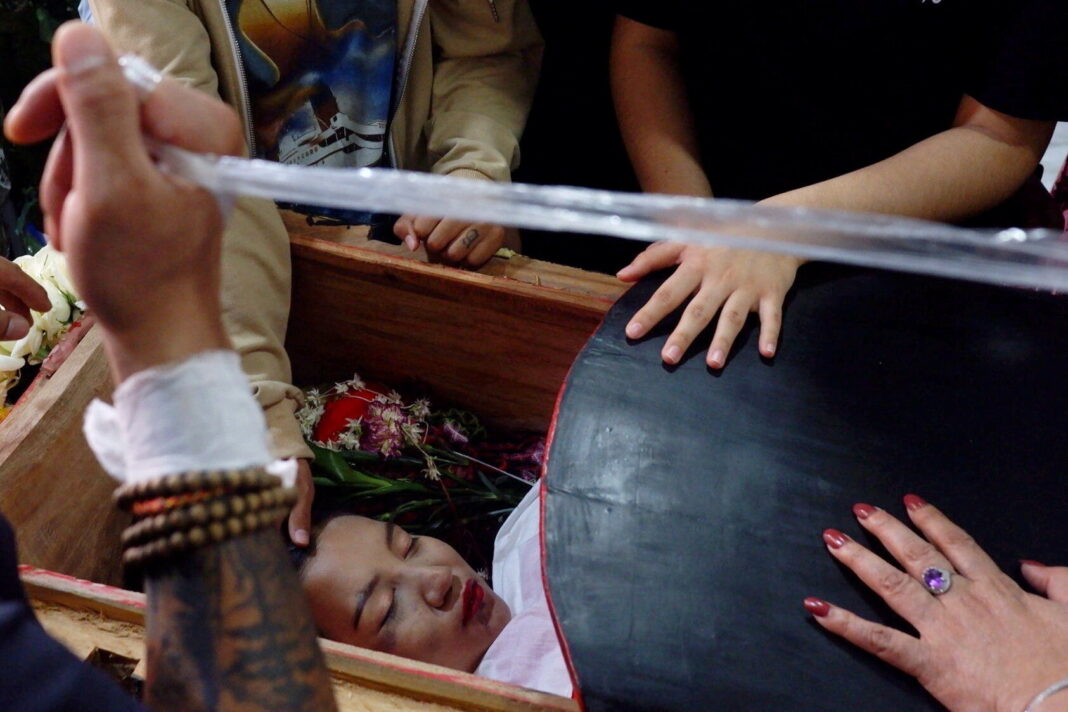 Image: Ma Kyal Sin’s funeral in Mandalay, Myanmar, on Thursday. The 18-year-old woman was one of dozens of protesters who were shot dead the previous day.Credit…Reuters

Ma Kyal Sin loved taekwondo, spicy food and a good red lipstick. She adopted the English name Angel, and her father hugged her goodbye when she went out on the streets of Mandalay, in central Myanmar, to join the crowds peacefully protesting the recent seizure of power by the military.

The black T-shirt that Ms. Kyal Sin wore to the protest on Wednesday carried a simple message: “Everything will be OK.”

In the afternoon, Ms. Kyal Sin, 18, was shot in the head by the security forces, who killed at least 30 people nationwide in the single bloodiest day since the Feb. 1 coup, according to the United Nations.

“She is a hero for our country,” said Ma Cho Nwe Oo, one of Ms. Kyal Sin’s close friends, who has also taken part in the daily rallies that have electrified hundreds of cities across Myanmar. “By participating in the revolution, our generation of young women shows that we are no less brave than men.”

Despite the risks, women have stood at the forefront of Myanmar’s protest movement, sending a powerful rebuke to the generals who ousted a female civilian leader and reimposed a patriarchal order that has suppressed women for half a century.

By the hundreds of thousands, the women have gathered for daily marches, representing striking unions of teachers, garment workers and medical workers — all sectors dominated by women. The youngest are often on the front lines, where the security forces appear to have singled them out. Two young women were shot in the head on Wednesday and another near the heart, three bullets ending their lives.

Earlier this week, military television networks announced that the security forces were instructed not to use live ammunition, and that in self-defense they would only shoot at the lower body.

“We might lose some heroes in this revolution,” said Ma Sandar, an assistant general secretary of the Confederation of Trade Unions Myanmar, who has been taking part in the protests. “Our women’s blood is red.”

The violence on Wednesday, which brought the death toll since the coup to at least 54, reflected the brutality of a military accustomed to killing its most innocent people. At least three children have been gunned down over the past month, and the first death of the military’s post-coup crackdown was a 20-year-old woman shot in the head on Feb. 9.

The killings have appalled and outraged rights advocates around the world.

“Myanmar’s military must stop murdering and jailing protesters,” Michelle Bachelet, the top human rights official at the United Nations, said Thursday. “It is utterly abhorrent that security forces are firing live ammunition against peaceful protesters across the country.”

In the weeks since the protests began, groups of female medical volunteers have patrolled the streets, tending to the wounded and dying. Women have added spine to a civil disobedience movement that is crippling the functioning of the state. And they have flouted gender stereotypes in a country where tradition holds that garments covering the lower half of the bodies of the two sexes should not be washed together, lest the female spirit act as a contaminant.

With defiant creativity, people have strung up clotheslines of women’s sarongs, called htamein, to protect protest zones, knowing that some men are loath to walk under them. Others have affixed images of Senior Gen. Min Aung Hlaing, the army chief who orchestrated the coup, to the hanging htamein, an affront to his virility.

“Young women are now leading the protests because we have a maternal nature and we can’t let the next generation be destroyed,” said Dr. Yin Yin Hnoung, a 28-year-old medical doctor who has dodged bullets in Mandalay. “We don’t care about our lives. We care about our future generations.”

While the military’s inhumanity extends to many of the country’s roughly 55 million people, women have the most to lose from the generals’ resumption of full authority, after five years of sharing power with a civilian government led by Daw Aung San Suu Kyi. The Tatmadaw, as the military is known, is deeply conservative, opining in official communications about the importance of modest dress for proper ladies.

There are no women in the Tatmadaw’s senior ranks, and its soldiers have systematically committed gang rape against women from ethnic minorities, according to investigations by the United Nations. In the generals’ worldview, women are often considered weak and impure. Traditional religious hierarchies in this predominantly Buddhist nation also place women at the feet of men.

The prejudices of the military and the monastery are not necessarily shared by Myanmar’s broader society. Women are educated and integral to the economy, particularly in business, manufacturing and the civil service. Increasingly, women have found their political voice. In elections last November, about 20 percent of candidates for the National League for Democracy, Ms. Aung San Suu Kyi’s party, were women.

The party won in a landslide, trouncing the military-linked and far more male-dominated Union Solidarity and Development Party. The Tatmadaw has dismissed the results as fraudulent.

As the military began devolving some power over the past decade, Myanmar experienced one of the most profound and rapid societal changes in the world. A country that was once forcibly bunkered by the generals, who first seized power in a 1962 coup, went on Facebook and discovered memes, emojis and global conversations about gender politics.

“Even though these are dark days and my heart breaks with all these images of bloodshed, I’m more optimistic because I see women on the street,” said Dr. Miemie Winn Byrd, a Burmese-American who served as a lieutenant colonel in the United States Army and is now a professor at the Daniel K. Inouye Asia-Pacific Center for Security Studies in Honolulu. “In this contest, I will put money on the women. They are unarmed, but they are the true warriors.”

That passion has ignited across the country, despite Tatmadaw crackdowns in past decades that have killed hundreds of people.

“Women took the frontier position in the fight against dictatorship because we believe it is our cause,” said Ma Ei Thinzar Maung, a 27-year-old politician and former political prisoner who, along with another woman the same age, led the first anti-coup demonstration in Yangon five days after the putsch.

Both Ms. Ei Thinzar Maung and her fellow rally leader, Esther Ze Naw, protest by day and hide by night. About 1,500 people have been arrested since the coup, according to a local monitoring group.

The pair were politicized at a young age and spoke up for the rights of ethnic minorities at a time when most people in Myanmar were unwilling to acknowledge the military’s ethnic cleansing campaign against Rohingya Muslims. At least one-third of Myanmar’s population is made up of a constellation of ethnic minorities, some of which are in armed conflict with the military.

When they led their rally on Feb. 6, the two women marched in shirts associated with the Karen ethnic group, whose villages have been overrun by Tatmadaw troops in recent days. Ms. Esther Ze Naw is from another minority, the Kachin, and as a 17-year-old she spent time in camps for the tens of thousands of civilians who were uprooted by Tatmadaw offensives. Military jets roared overhead, raining artillery on women and children, she recalled.

“That was the time I committed myself to working toward abolishing the military junta,” she said. “Minorities know what it feels like, where discrimination leads. And as a woman, we are still considered as a second sex.”

“That must be one of the reasons why women activists seem more committed to rights issues,” she added.

While the National League for Democracy is led by Ms. Aung San Suu Kyi, its top ranks are dominated by men. And like the Tatmadaw, the party’s highest echelons have tended to be reserved for members of the country’s ethnic Bamar majority.

On the streets of Myanmar, even as the security forces continue to fire at unarmed protesters, the makeup of the movement has been far more diverse. There are Muslim students, Catholic nuns, Buddhist monks, drag queens and a legion of young women.

“Gen Z are a fearless generation,” said Honey Aung, whose younger sister, Kyawt Nandar Aung, was killed by a bullet to the head on Wednesday in the city of Monywa. “My sister joined the protests every day. She hated dictatorship.”

In a speech that ran in a state propaganda publication earlier this week, General Min Aung Hlaing, the army chief, sniffed at the impropriety of the protesters, with their “indecent clothes contrary to Myanmar culture.” His definition is commonly considered to include women wearing trousers.

Moments before she was shot dead, Ms. Kyal Sin, dressed in sneakers and torn jeans, rallied her fellow peaceful protesters.

As they staggered from the tear gas fired by security forces on Wednesday, Ms. Kyal Sin dispensed water to cleanse their eyes. “We are not going to run,” she yelled, in a video recorded by another protester. “Our people’s blood should not reach the ground.”

“She is the bravest girl I have ever seen in my life,” said Ko Lu Maw, who photographed some of the final images of Ms. Kyal Sin, in an alert, proud pose amid a crowd of prostrate protesters.

Under her T-shirt, Ms. Kyal Sin wore a star-shaped pendant because her name means “pure star” in Burmese.

“She would say, ‘if you see a star, remember, that’s me,’” said Ms. Cho Nwe Oo, her friend. “I will always remember her proudly.”

Hannah Beech has been the Southeast Asia bureau chief since 2017, based in Bangkok. Before joining The Times, she reported for Time magazine for 20 years from bases in Shanghai, Beijing, Bangkok and Hong Kong. @hkbeech